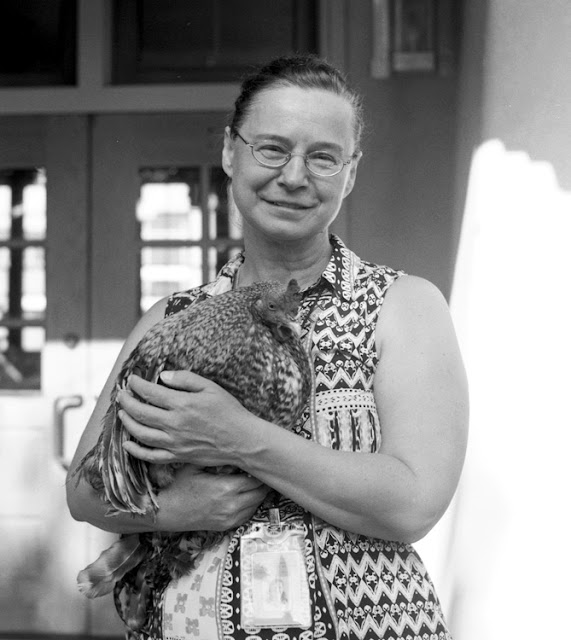 I visited the National Hispanic Cultural Center this morning with my Yashica-Mat.  I was surprised to find a couple roosters hanging out in the back courtyard.  One was pecking around under a big cottonwood, but the other was lying down beside a food dish and it looked pretty lethargic.  A couple staff people showed up and explained that the roosters had gotten into a fight the day before.  There were no obvious signs of injury, but this one was clearly pleased to get some personal attention.  They said the two roosters just showed up one day.  The staff started feeding them, and they became very tame.
Posted by Mike at 6:15 AM 4 comments:

I stopped using PMK Pyro developer a while ago after noticing that there was a big hunk of white precipitate at the bottom of the Solution-B bottle.  I thought I might need to get another PMK kit, but I first did a little searching on line about the issue.  What I turned up was a video by Chris Crawford about using the staining developer, and he mentions in it that the precipitate is the normal result of a super-saturated solution and that it has no adverse effect in the development process.  So I loaded a roll of TMAX 100 into the Minolta X-700 and headed down to the Art Museum's sculpture garden for a test run. 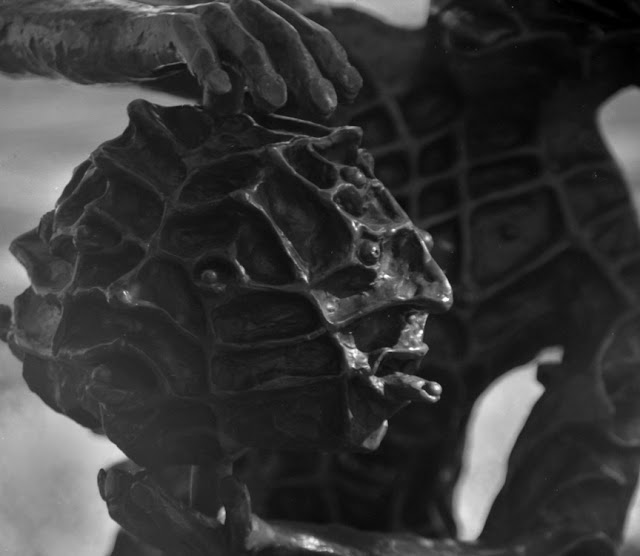 I revisited the piece in the West Sculpture Garden that was featured in my previous post.  A map I picked up in the lobby shows that sculpture's title is Head Games and the artist is Ho Baron, who is based in El Paso. 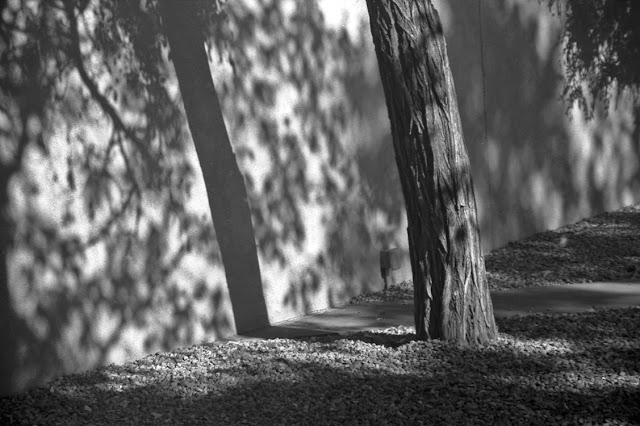 I rated the TMAX at 80 ASA, but would have been better off with a full stop of over exposure as the negatives were all thin.  Slow film and a cheap zoom lens turned out to be a poor choice for early morning shadows and interior shots. 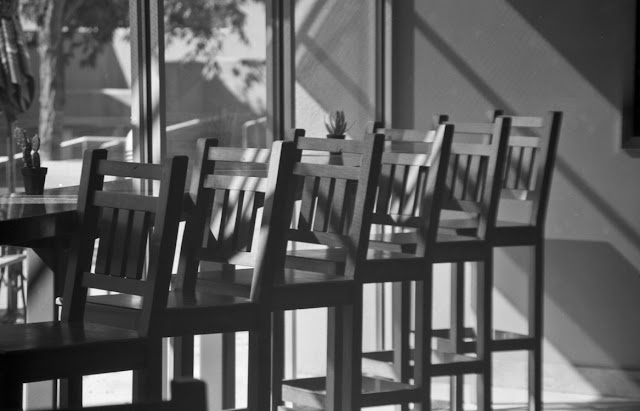 I'm not sure who made the zoom lens; it says "Sears" and "Korea".  The 35mm to 135 is a handy range, and in normal lighting the sharpness is good as can be seen in the shot below of Allan Houser's Prayer. 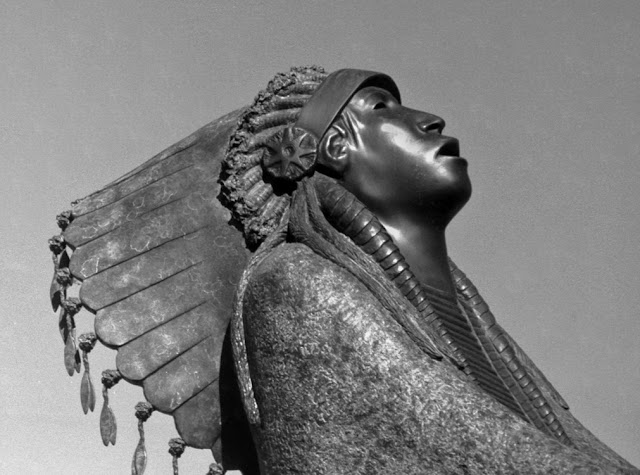 So, I'm pleased to still have PMK Pyro available.  I don't know that I'll like the developer for use with  TMAX over other choices, but I've seen some nice results with the combination and it seems worth further investigation.
Posted by Mike at 10:36 AM 2 comments:

Since we've lived in Albuquerque I have often used a couple garden statues as test subjects for my old cameras.  One is in the botanic garden, and the other, a depiction of a mother and child, was in a corner of the sculpture garden behind the Art Museum.  When I walked through the Museum site yesterday with my Nikon FE I was surprised to find that the space formerly belonging to my usual subject was now occupied by a dancing head hunter. 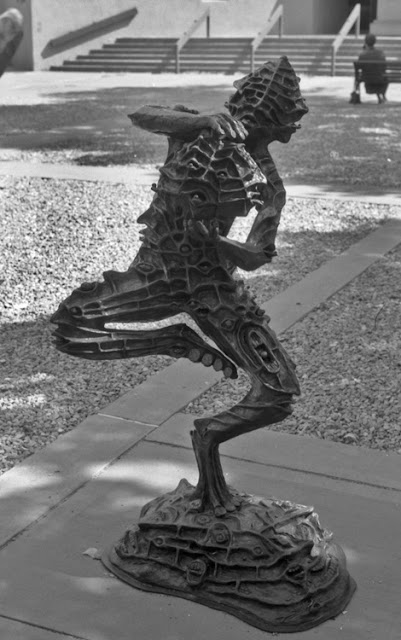 It was kind of a shocking change to absorb. 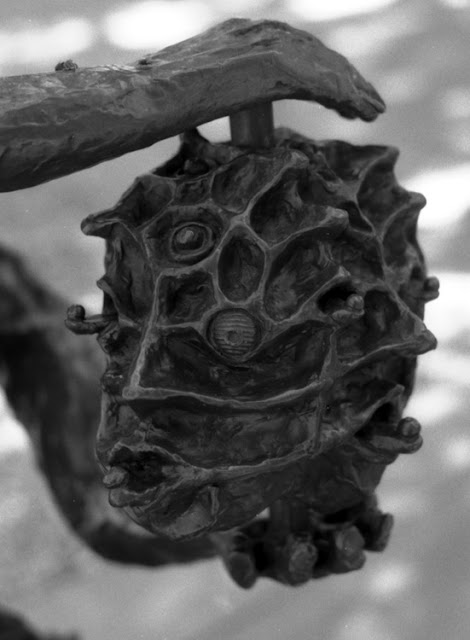 The sculpture's location produces interesting lighting through the day, so I'll likely use the new one much as I did the previous subject.  This sculpture looks very different depending on the position from which it is viewed as each head has multiple faces.
Posted by Mike at 10:54 PM No comments:

On previous visits to Phoenix I've often reserved a morning to visit the PIMA air museum in Tucson. With temps above 100 degrees, however, wandering around acres of concrete was just not a practical option. So, we made a shorter trip to Falcon Field in Mesa where most of the restored aircraft are in a couple big hangers. 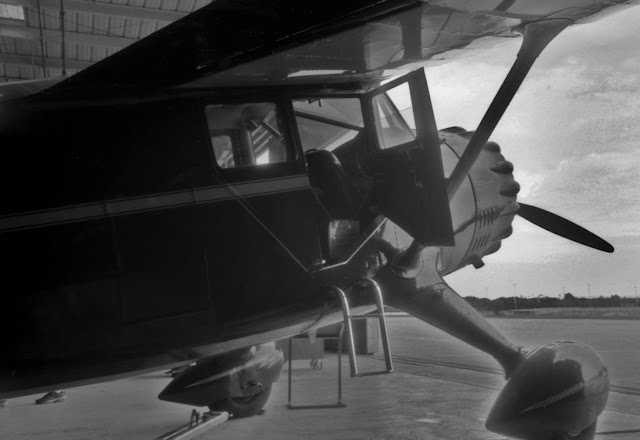 With my last visit to the place in mind I loaded the Leica IIIa with TMAX 100 and attached the Jupiter 12 35mm, anticipating the opportunity to shoot the B-17 and some of the other big planes out on the tarmac.  As it turned out, the big planes were out flying around somewhere else, and we were confined to the dimly lit hangers.  This fine looking craft was at the front of the hanger.  I think it is a Stinson Reliant.
Posted by Mike at 5:47 AM 2 comments:


One of the highlights for me during visits to Phoenix, even in mid-summer, is to pay a visit to the photography exhibit in an upper tier gallery at the Phoenix Art Museum.  The pictures shown there are drawn from the vast archives of the Center for Creative Photography in Tucson.  The selection of pictures on this occasion  was entitled Mexican Photographers, Mexican Views, which "features more than 60 photographs created solely by Mexican artists that offer an intimate view into 20th-century Mexico and the country’s shifting national identity."

At least half the photographs were made by Mexican women photographers.  I was familiar with the work of most, but it was a real treat to see prints on paper and I also enjoyed making the acquaintance of some artists whose work was new to me.

Much of the work on display dates back to the first half of the Twentieth Century.  Several of the photographers started their careers as assistants to Manuel Alvarez Bravo, including his wife Lola.  Like their mentor, the women often focused on recording Mexico's astoundingly beautiful indigenous people and their cultures.

New to me was the work of Mariana Yampolsky.  Her pictures reflect an extraordinary life journey.  She went to Mexico from Chicago in 1945 shortly after receiving her Bachelor of Fine Arts degree to do print making at the Taller de Grafica Popular.  Three years later she took up photography under the guidance of Lola Alvarez Bravo, and in 1954 she became a Mexican citizen.


As is evident in Margaret's picture of the gallery, most of the prints are small compared to today's standards, and they are often more darkly toned than we are accustomed to seeing now.  The result is that many cannot be fully appreciated as reproductions in books or on line.  At the gallery you really have to stand close to the prints and even lean in a bit to grasp the delicate subtleties of tonality and the compositional innovativeness.

Discovering what is possible through photography has always been one of the major rewards of the art for me.  While I have mostly focused on showing scanned images of my film negatives on line, I enjoyed making some prints for an exhibit recently, and that along with the Phoenix exhibition reminded me how important it is to be able to see prints which fully reveal an artist's intentions.
Posted by Mike at 12:21 PM 2 comments:

In our past visits to family in Phoenix we have always opted to take the quickest route from Albuquerque, passing through Flagstaff and then south on Highway 17.  This time we decided to take a more leisurely path, striking south from Holbrook and heading down along Arizona's east side through Show Low and Globe. 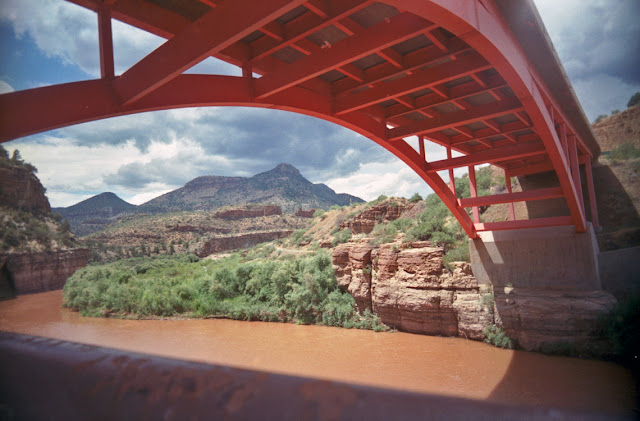 The spectacular Salt River Canyon is located mid-way between Show Low and Globe.  Two bridges span the river there; the single lane steel bridge built in 1933 is now just for pedestrian traffic 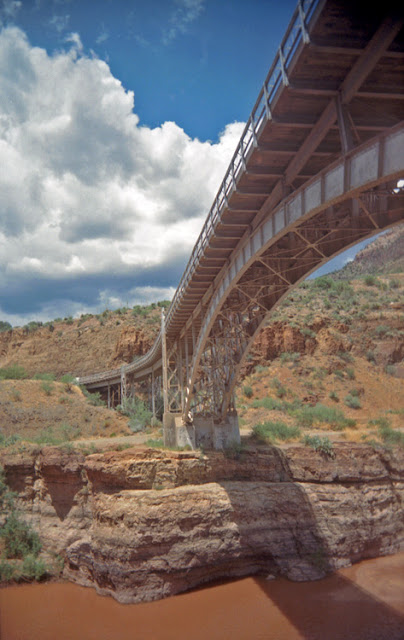 We retraced the same path on the way home and enjoyed an escape from the summer heat of Phoenix in the higher elevations north of Globe.  We stayed on Highway 60 through Show Low which ultimately got us to Socorro, New Mexico, just an hour from Albuquerque.  Rain followed us much of the way, and the temperature dropped to a low of 59 degrees as we passed the Very Large Array. 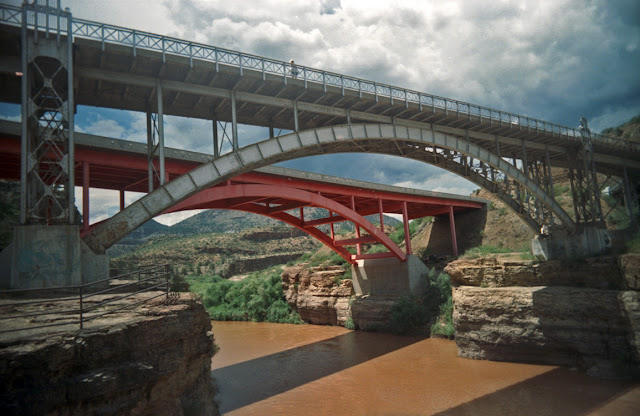 The Highway 60 two-lane road traverses a great variety of terrain including pine forested mountain slopes and arid grasslands.  The trip was a little longer than going through Flagstaff, but the added time seemed insignificant because of the sparse traffic and the great scenery.
Posted by Mike at 6:41 AM 2 comments: