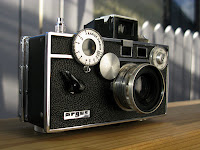 The first camera I bought for myself was an Argus C3.  That would have been about 1958 when I was just out of high school.  Argus was still making the camera, but I got mine used in a pawn shop.  I don't recall exactly what became of that first one; I've bought several more in the last ten years and have enjoyed shooting them again.

I found the 35mm Sandmar a couple years ago on eBay.  The maximum aperture is f/4.5; it's a little slow, but it is coated and reasonably sharp.  The C3 and the Sandmar always seem a good choice for shooting at car shows like the early Spring one I went to this morning in Old Town Albuquerque. 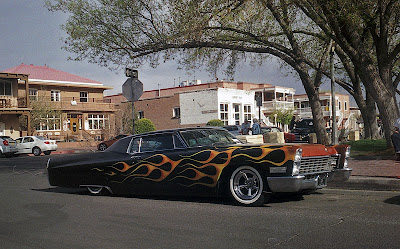 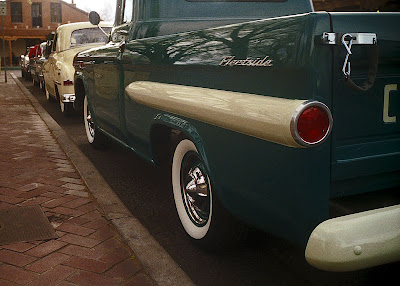 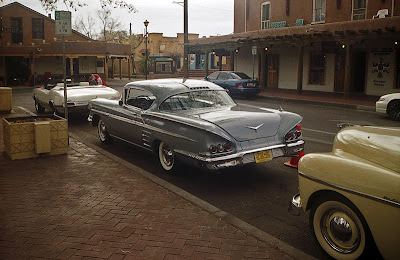 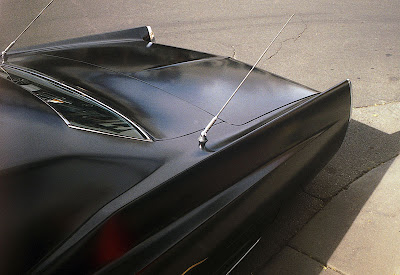 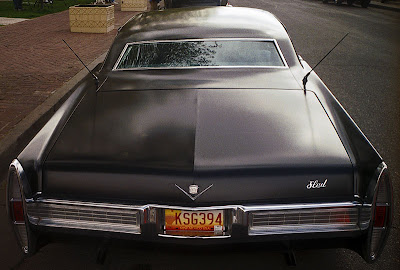 One of the two nearby Walgreen's Drugstores has stopped processing 35mm film.  The other is due to shut down its Fuji machines in a couple days.  It seems my C3 and I have come full circle.
Posted by Mike at 5:37 PM 4 comments:

The signal and the noise 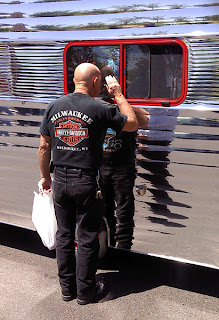 I just read Nate Silver's book, The Signal and the Noise, so of course that allows me to steal his title. I'm not going to actually say anything much about the book except to note the phenomenon under examination is evident in the book's reception and reviews. I'm amused that the Republican pundits accused Silver of a liberal bias because he was predicting an Obama win. Given his faultless performance in both the national and state races, Silver is obviously a competent number cruncher; he also seems to me to be a pretty much standard-issue libertarian geek of the type one finds hanging out at Slashdot.

The signal to noise ratio is something we all must deal with constantly in all of life's aspects, but it's seeming more overwhelming the last couple decades due to the rise of computing and the internet. One sees the problem expressed very often in regard to photo history and criticism as bad ideas, bad history and bad analysis get propagated and reproduced at the speed of light. Of course, the origins of the problem are pre-computer age, but the exponential propagation takes us into new territory.

I got to thinking about this topic recently when I was writing about Edward Weston's life and work. I googled "f.64" which was the name of a group organized originally in 1932 to promote a photo exhibit of a half-dozen proponents of straight photography which included Weston. I was dismayed to see that the Wikipedia reference on the subject was a hopeless misrepresentation of history. The comparison with the earlier tradition of pictorialism was muddled by confusion over terminology, and the positions of predecessors and pioneers like Stieglitz was completely misrepresented. The so-called f.64 manifesto was featured as if it represented something other than exhibition hyperbole.
i.e.:
"..Pure photography is defined as possessing no qualities of technique, composition or idea, derivative of any other art form..."

I think Willard Van Dyke may have penned that; it has to be rated as one of the silliest things said at any place or time about photography. Ansel Adams, a smart member of the group, amended the statement to the point of refutation later, but that has not prevented it from being propagated ad nauseum.

Weston wrote quite a lot about photography and much of that is well worth reading, but he had his blind spots as well, particularly as related to his own work, and those too have clogged both the analogue and digital channels of photography's history. For instance, Weston often referred to the reality and "thingness" of his subjects, but much of his most lauded work with nudes, nature and still life consists of abstract representations. Janet Malcolm laid out the issues around these conflicts between stated intent and execution in a review of a Weston retrospective which took place in New York in 1975:

"The sight of these strange, strong compositions casts doubt on another accepted idea about Weston. This is his presumed role in the history of photography as a prime mover in the revolution that over-threw the "pictorial" approach of the Photo-Secession and established "straight" photography as the medium's legitimate mode. In actuality, what Weston did (as Paul Strand and Man Ray had already begun to do) was simply to bring pictorialism up to date: to replace the Impressionist, Symbolist, and Pre-Raphaelite models of the Photo Secession with those of Cubist, Futurist, Dadaist, Purist, and Surrealist art. Straight photography -- whatever it is -- is hardly exemplified by peppers like clenched fists...,thighs like shells, shells like vulvas, cloud formations like elongated torsos.., palm trunks like industrial smokestacks -- forms that Weston saw because he had seen modern art...
...The technical innovations of straight photography that were erected into a kind of religion by its practitioners -- the change from soft-focus to sharp lenses, from manipulated to unretouched prints, from warm and soft to cold and glossy printing paper -- were, again, changes dictated by the appearance of modern art rather than by the claims of "reality." Optical sharpness, after all, is more an attribute of the buzzard's than of the human eye; Stieglitz's blurry view of the thin Flatiron Building on a snowy day is surely a more literal rendering of "the thing itself" than Weston's razor-sharp close-up of a halved artichoke."
Posted by Mike at 4:01 PM 2 comments: 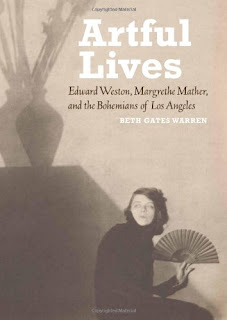 I thought Beth Gates Warren did a good job of recovering much of the substance of Edward Weston's early career which he had meticulously obscured. I think the limitations in her account of the period can mostly be attributed to the fact that she was trying to not go too far beyond her sources. I would guess the Weston family would not agree and would not be fans of Warren's book, though she was in my opinion overly generous in her assessment of Weston's work in his Los Angeles years. Warren's approach to critiquing the pictures from that period is primarily descriptive with interpretation mainly focusing on Weston's intentions for his compositions. She does, of course, report Weston's final self-assessment of that period in which he stated that he had lied to himself about the value of his work in the early period.

The book is as much about Margrethe Mather and her personal and artistic relationship to Weston as it is about Weston and his evolution as an artist. Warren presents as good a picture of the enigmatic Mather as possible given the available records, except that I think a more critical aesthetic analysis would have been helpful in sorting out how Mather and Weston influenced each other. Looking at their pictures side by side when both were working primarily in the gauzy pictorialist style, Mather seems to me as good if not better than Weston in many instances, particularly in regard to the portraits. Mather's portraits show a real connection to the personalities she photographed while Weston's from that period often seem like caricatures.

The works that Weston at the time portrayed as avant garde usually involved unconventional compositional balance in a manner which may have been more Mather's creation than his own. Ironically, he presented his work at that time as quintessentially photographic though it was obviously grounded in 19th Century painterly values. The cover photo on Warren's book looks back even further to the stylistic preference of the period for Japanese woodblock prints. The message those pictures by Weston mainly convey is one of conflicted intentions.

While there was some aesthetic parity evident between the two artists, Mather's work doesn't seem characterized by internal conflict. She clearly didn't share Weston's level of ambition, and it seems her identity was not wholly tied to her art as was the case with Weston. While still together with Weston she seemed content to remain in the soft-focus mode when many of her peers in the wider world were moving toward the Straight Photography model. A good example of this is the work entitled "Water Lily" from 1922 which is transparently derivative from Baron Adolf De Meyer's still life compositions from 1908. It seems odd that Warren chose to include the picture in her book without commenting on that connection and its significance. Later, Mather moved away from the soft-focus style. She did a compelling series of close-up patterns of shells, cigarettes and other man-made and natural objects. Her pictures of hands and feet are evocative of the work of Stieglitz and a flower shot suggests the influence of Imogen Cunningham.

Given the history Warren presents of Weston, Mather and their circle of friends it doesn't seem surprising that Weston made the leap he did into a new life and a new photographic style, except for the fact that he was 37 years old at the time.  It does seem extraordinary that he was able to successfully recreate his career as an artist at that point, though not with the rapidity that he probably first imagined.    He did some exceedingly nice work in Mexico, but achieved little real immediate financial or critical success.  That would come much more gradually as he abandoned Modotti and the Mexican adventure and returned to California, ultimately hooking up with Charis Wilson when she was barely out of high school .  Charis' indefatigable support was clearly a key element in the arc of Weston's culminating accomplishment.  Of course when Charis demanded some public recognition of her creative contributions, that was more than Weston's ego could sustain and so she had to go too.
Posted by Mike at 1:31 PM No comments: