More from the No.1A Pocket Kodak. Getting the most from the 131mm lens requires a steady hold. A tripod is best, but I find I can get by most times by bracing the camera on my knee or on the ground. 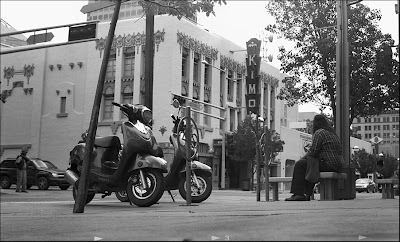 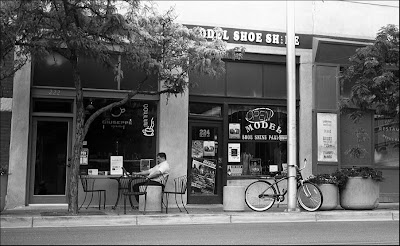 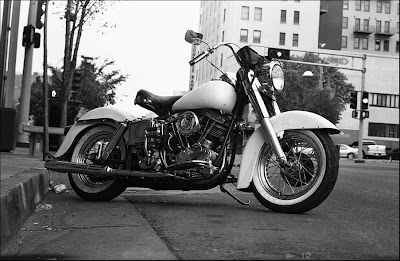 We are finally getting some monsoon skies which encourage me to get back out on the street with my cameras.
Posted by Mike at 2:43 PM No comments: 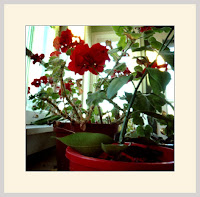 I've been pleased to find several blogs recently devoted to the use of old film cameras and have added links to them in the right-hand column:

I can say from my own experience that maintaining such web productions takes a lot of dedication. Please visit these sites and leave some feedback for the hardworking authors.

I particularly like the way photos are exhibited on the PHOTIQUE blog. It appears that the photo display is a capability built into the posterous.com blogging system. I wish the Blogger system offered something as good.
Posted by Mike at 12:48 PM 1 comment:

Summer in the Bosque

I took a long walk this morning along the river. It was the first time in quite a while as most of Albuquerque's open spaces have been closed because of drought and fire danger. 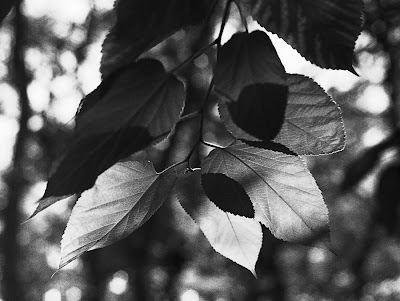 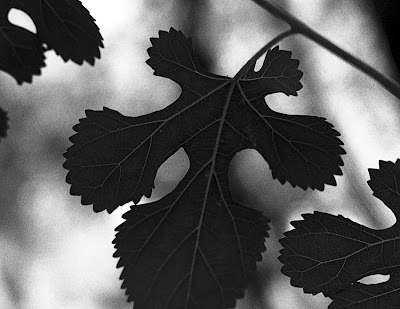 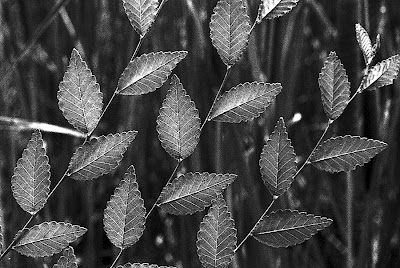 My negatives were overly contrasty, not what I expect from Tri-X. Time to start a new bottle of HC-110, I guess.
Posted by Mike at 4:34 PM 2 comments:

I've had an Argus Cintar lens rattling around in my tool box for about five years which I have used as a loupe. Recently, I acquired a nice C3 body with just a 35mm wide-angle, so it seemed like a good excuse to see if the Cintar could still deliver. The F3.5-50mm Cintar is a Cooke Triplet design; this one is a pre-war uncoated example. I had partially disassembled the lens, so it needed to be put back together and adjusted. Four small set screws at the lens front can be loosened to permit collimation for proper infinity focus. 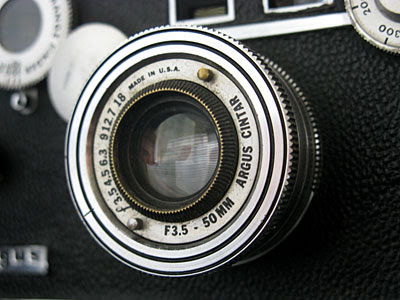 To test the C3 with the Cintar, I took it up to the J&R VINTAGE AUTO MUSUEM in Rio Rancho which has an extraordinary collection of restored classics. Photography at the museum is something of a challenge as the lighting is dim and the cars are packed tightly into all the available space. Nevertheless, I thought the C3 and the resurrrected Cintar handled the situation quite well. 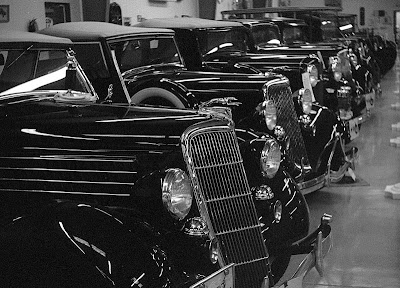 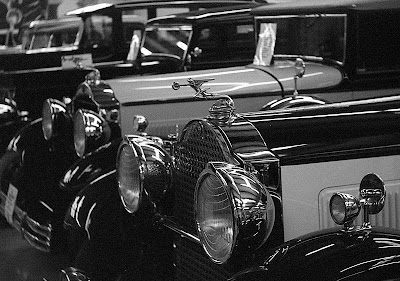 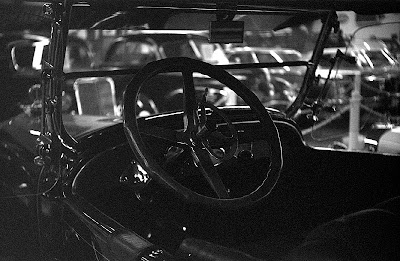 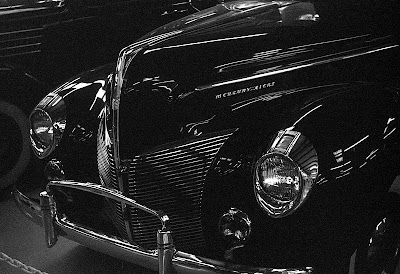 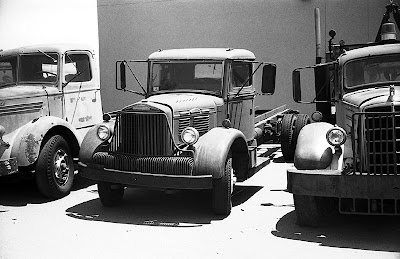 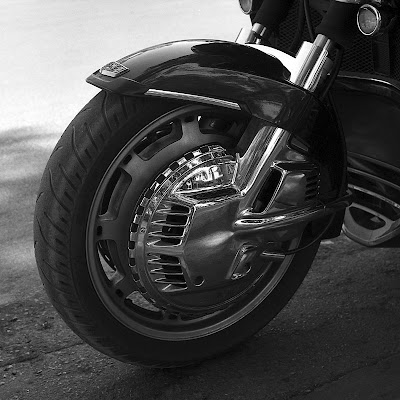 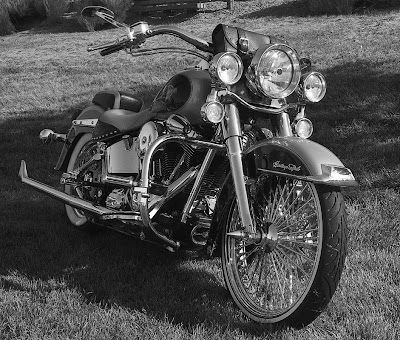 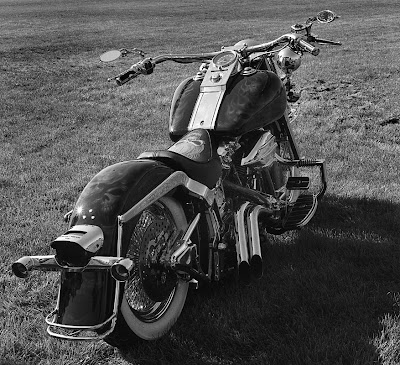 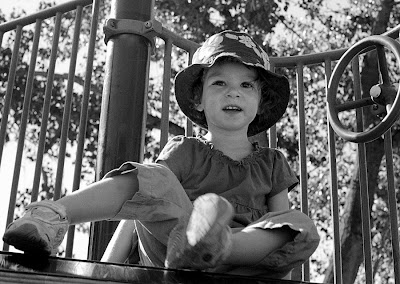 The new bellows is keeping out the light from where it doesn't belong. However, I'm still having problems with framing and film scratching in the No.1 Kodak Series III. I'm also seeing some under-exposure, even though the shutter appears to be working perfectly. My thought is that the light transmission capabilities of the glass in some of these old Kodak lenses is poor compared to newer standards. Luckily, the big 6x9 negatives allow for a large margin of error.
Posted by Mike at 2:29 PM 1 comment:

Margaret and I went to see the current exhibit at the UNM Art Museum of the drawings, paintings, collages and architectural models of Antoine Predock. It is just a short walk from the Museum to one of Predock's buildings which houses the UNM School of Architecture and Planning. 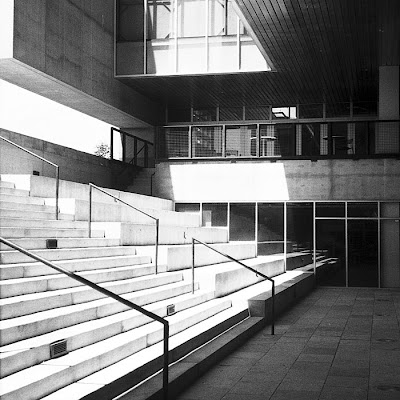 Since I had my Foth Derby in my pocket, that was what I used to shoot with, though it wouldn't be my first choice as a camera for architectural subjects. 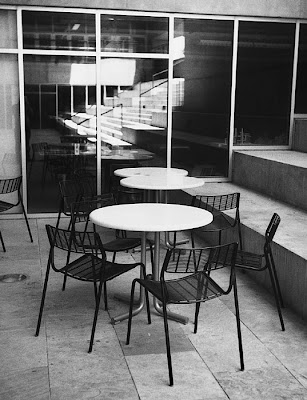 The picture below was made of the same subject some time ago, using the Ikonta 521/16. The Novar lens on Zeiss is a three-element anastigmat much like the one on the Foth Derby, but the larger format clearly gives the 521/16 the edge for this subject. 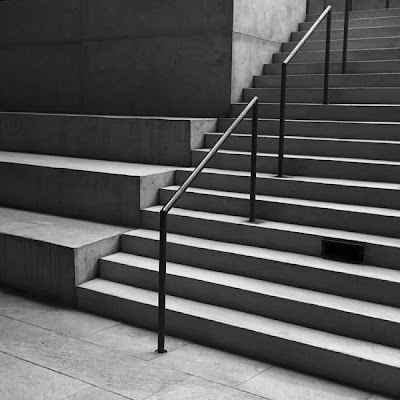 Predock's design studio is not far from from where I live in Albuquerque. The city is home to several of his creations in addition to the Architecture School including the La Luz residential development, the Rio Grande Nature Center, and the Mesa del Sol Town Center. All of those buildings and hundreds of others around the world are featured on his web site. Also prominently featured at both the web site and the UNM exhibit are samples of his big motorcycle collection, and his thoughts on a variety of his many interests. Some of those interests were touched on in a 2007 interview of the architect by Vladimir Paperny.
Posted by Mike at 9:58 AM No comments: 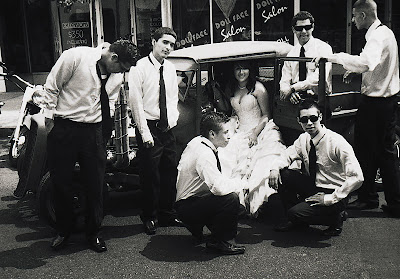 A block of Central was roped off for an afternoon car show. The street can get pretty rowdy on weekend nights, but the heat of a July afternoon kept the atmosphere mellow.

I managed to tame the curly exuberance of the Efke 100 film a bit by winding it up against the curl and leaving it overnight. That let me lay the film strip flat on the scanner in the 4x5 mask area. I was pleased with this last roll from the Foth Derby.
Posted by Mike at 10:58 AM 2 comments: