Today's post gives the plastic Vivitar PN2011 another day in the sun.  The occasion was a guided tour of an archaeological site in the mountains west of Monticello, New Mexico. It may seem odd to entrust the recording of such an opportunity to one of the simplest of cameras, offering no adjustments of aperture, shutter speed or focus. Somehow, though, the camera's simplicity is able to set one's creativity free in ways that more sophisticated equipment often do not. 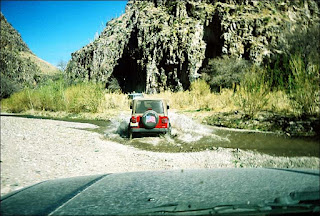 Beyond Monticello the road follows the Alamosa Creek bed for many miles to the O'Toole Ranch, which encompasses one of the most southerly ancient Pueblo sites in New Mexico. The area contains cultural remains from both the Anasazi north and the Mogollon south, and was populated by the ancient Puebloan peoples from the 7th to 15th Centuries. Thereafter, the Apache held sway over the area until the late 19th Century. 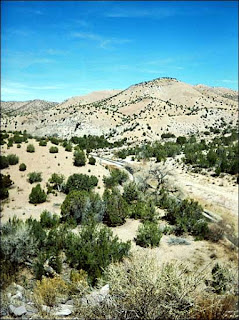 Pueblo sites ring a valley at the upper end of the Cañada Alamosa at about six thousand feet elevation. A creek with year-around water runs through the upper section of the Cañada; it is fed by a spring with a 2,000 gallon per minute flow. On the surrounding hills, there is just a sparse covering of Juniper, but in the canyon bottom, the steady supply of water supports many giant old cottonwood trees. 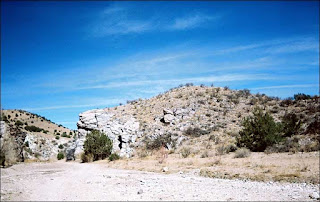 Margaret and I drove up this canyon about fifteen years ago. Had we been sharper eyed we might have noticed the three small sections of masonry wall that can be see near the top of the Pinnacle Ruin site from the creek bottom. This site and the Victorio Ruin across the valley to the south contain hundreds of rock-walled rooms. 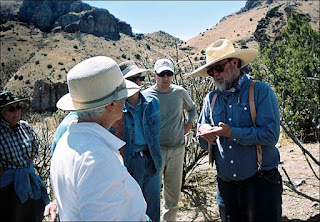 Karl Laumbach is co-director of the Pinnacle Ruin fieldwork along with Stephen Lekson; together, they identified the site along with several others in the valley in 1988. Laumbach is seen here explaining the chronology of the ancient occupation of the area. Pottery styles, wall-building techniques and carbon dating suggest that the last residents migrated here from Mesa Verde. 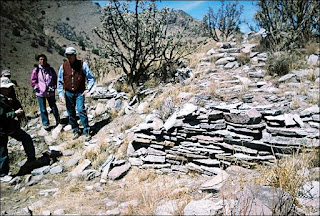 Dennis O'Toole, in the red vest, stands beside one of the exposed room walls at the Pinnacle Ruin. He and his wife, Trudy, acquired the ranch surrounding the sites in 1999. It is hard to imagine a better steward for the place; he is an historian whose resumé includes museum director and Administrator of Colonial Williamsburg. 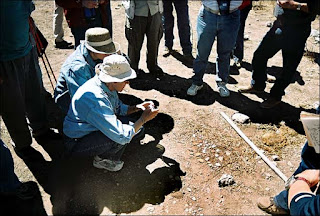 Because the Cañada Alamosa sites were on a private ranch property in historic times, they have been relatively undisturbed. Although the sites cover many acres and had hundreds of contiguous rooms, the only easily visible evidence of ancient occupation is the large number of small pot sherds on the surface. This small collection on the ground spans nine centuries.

Further information on the Cañada Alamosa archaeological project is available at the web site of Human Systems Research, Inc .
Posted by Mike at 6:39 AM 2 comments: 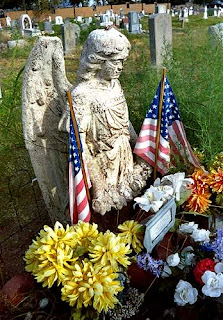 The point & shoot Vivitar PN2011 is probably the commonest plastic camera to be found in thrift stores, and it is seldom priced higher than a couple bucks. The shutter speed is a fixed 1/125, the f-stop is about f/16. The 28mm, 2-element lens is very sharp. I've pointed the camera at quite a variety of subjects, and have seldom been disappointed by it. This Sunday Slideshow resulted from a visit to an old Las Cruces cemetery a few years ago.
Posted by Mike at 7:11 PM 4 comments:

I picked up this elegant little 127-format folder recently on ebay. The Foth Derby was a contemporary of the early Leicas and had several features in common with them including a similar focusing mount and a cloth focal plane shutter with a 1/500 top speed. 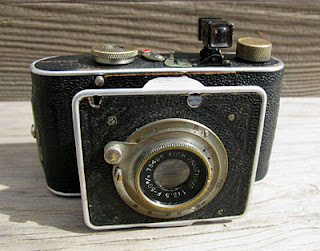 When I held a light to the back of the shutter curtains and peered in through the lens, it looked like the starry night sky. To cover over the pinholes, I applied a coat of opaque fabric paint to both curtains. Not having any 127 film on hand to test the repair, I rolled up a strip of 35mm Acros inside some 127 backing paper to do some test shots. 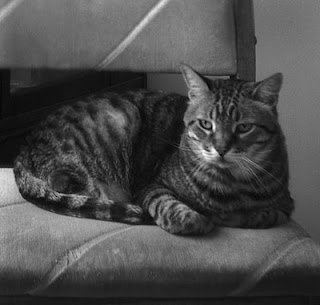 The paint seems to have gotten rid of all the pinholes. However, I did get a couple of instances of a light leak across the frame due to the fact that a gap sometimes opens between the curtains if I don't cock the shutter with a single smooth turn. I may try increasing the tension on the curtains a bit.
Posted by Mike at 1:45 PM 2 comments: 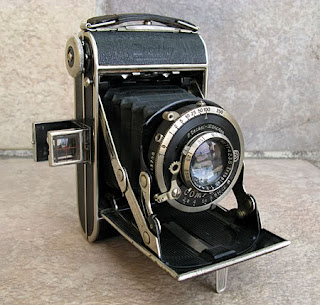 My Dolly looks nice, but it has a peculiar feature. In the assembly of the camera at the factory, the body and the shell of the camera were put together in the reverse of the proper orientation. The result is that the shutter release is positioned such that the user's fingers get in the way of the view. I turned the shutter and lens so that the release was on the underside out of the way, but that results in the cable release socket being inaccessible behind a strut. All that aside, the Dolly is still a nice shooter. The Trioplan lens is a very sharp three-element design, and the big old Compur shutter remains sturdy and accurate. 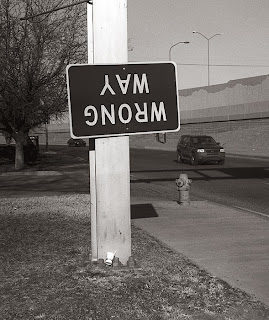 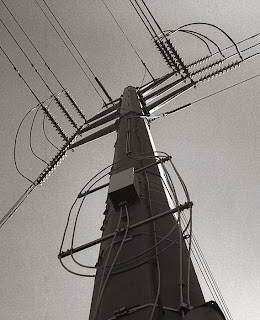 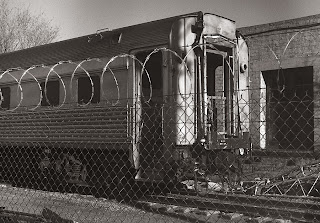 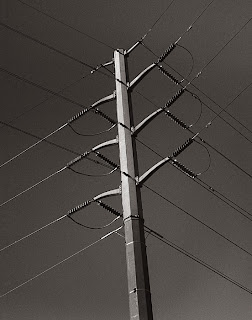 Shooting the No.1 Pocket Kodak

Kodak's folders like this No.1 Pocket Kodak used 120 rollfilm prior to the 1932 introduction of the 620 format. 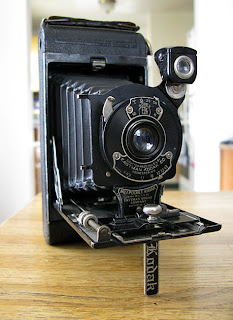 Kodak marketed the Kodar lens as a mid-level product, situated between the older standard Rapid Rectilinear and the later three-element Anastigmat design. The Kodar does a very credible job of making images, though I would be hard-pressed to distinguish them from those from the Rapid Rectilinear. What really appeals to me about this camera, however, is the fact that the aperture can be stopped down to f45. That means 400-speed film can be used at the top 1/50 shutter speed in direct sunlight, and in low light one can still use small apertures with good depth of focus. 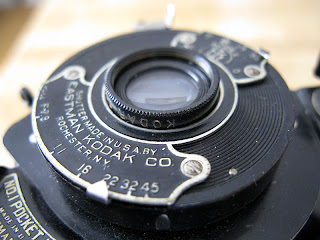 I usually make some minor modifications to my old Kodak folders to make their use more practical. A flap of black tape covers the ruby window except when I am advancing the film. A lensless eye-level finder taken from another old camera is held in place with duct tape, and it makes composition considerably easier than using the squinty little reflex finders. A depth-of-field table for the particular lens shows the hyperfocal distance and assists in establishing the range of sharp focus at different f-stops. 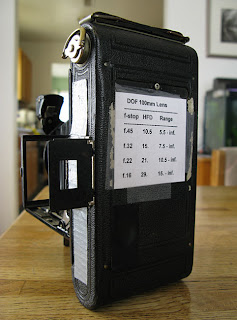 I tend to employ cable releases with my old folders at it is easy to jiggle the camera using the lever release out near the lens. A lens hood would also be a good idea with the uncoated lens, but it still produces nice contrast and sharpness as long as you don't angle it too close to the sun. As may be seen in the last photo, I haven't yet stamped out all the light leaks. 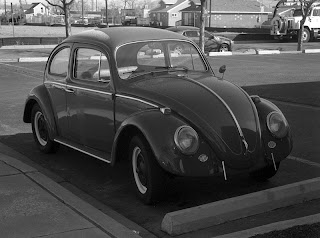 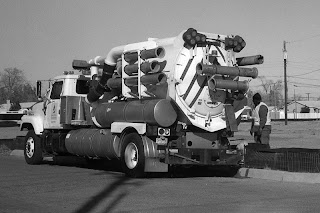 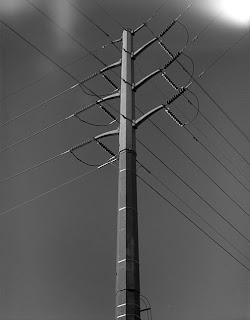 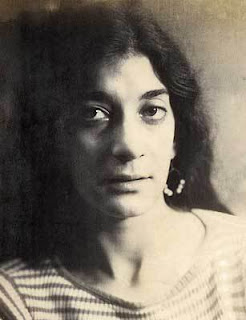 This Sunday Slideshow is necessarily short as it documents two very brief flirtations with the Polaroid process. The first of these began in San Francisco in 1970 with a Speed Graphic press camera and a Polaroid back. I liked the smooth sepia tones of the images, but the cost was intimidating at a time when jobs were hard to come by.

Thirty years down the road found us in New Mexico. Polaroid was on the ropes and Walmart was unloading the film at bargain prices. I picked up several cheap point-and-shoot cameras and burned a few boxes of film before it came to an end.

What got me thinking back to those times was a current show at the Albuquerque Art Museum of the work of H. Joe Waldrum. He started using an SX-70 as kind of a note taking device for his painting, but then got absorbed in the process and made thousands of instant prints. The show runs until April 10, and features over 900 images displayed in a continuous line that runs the length of four walls in a large gallery. There is a companion exhibit with a few hundred more prints at the New Mexico History Museum in Santa Fe.
Posted by Mike at 5:26 PM No comments: