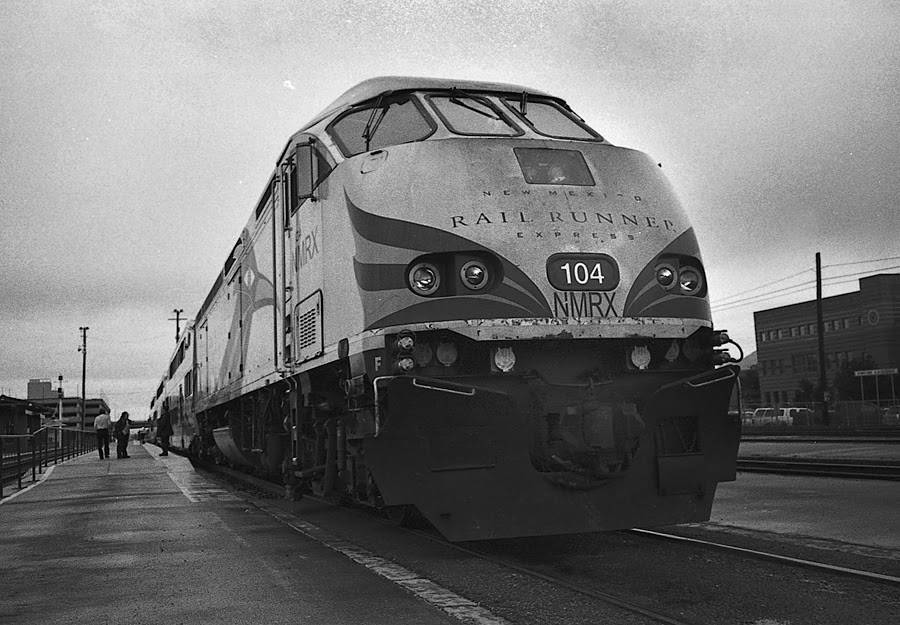 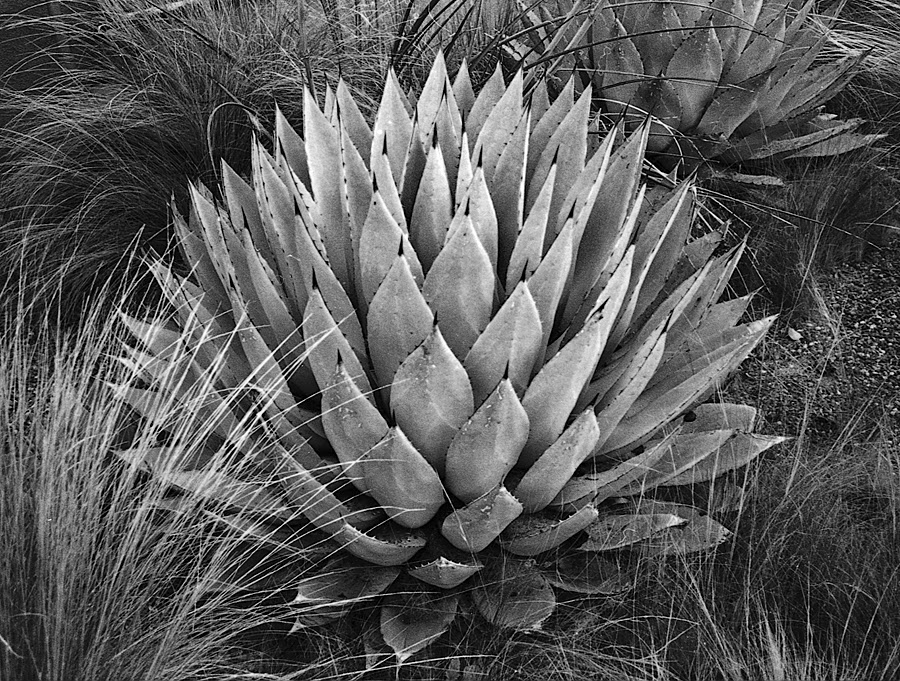 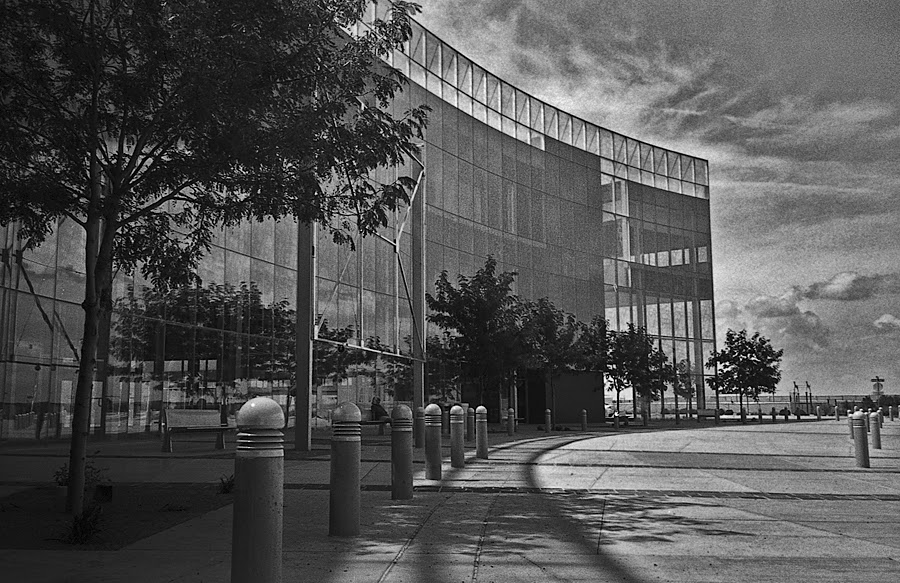 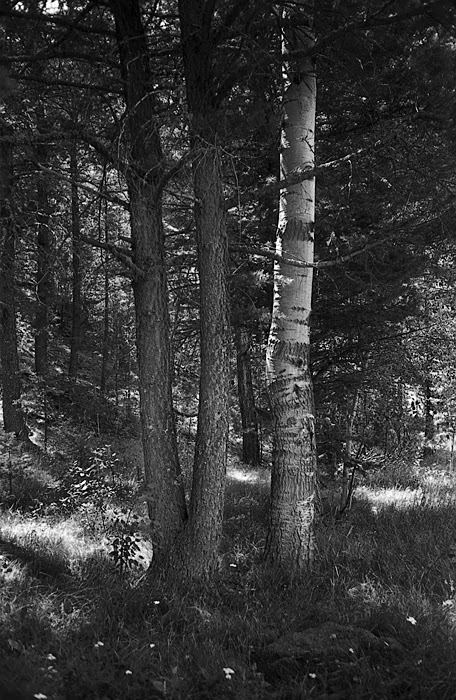 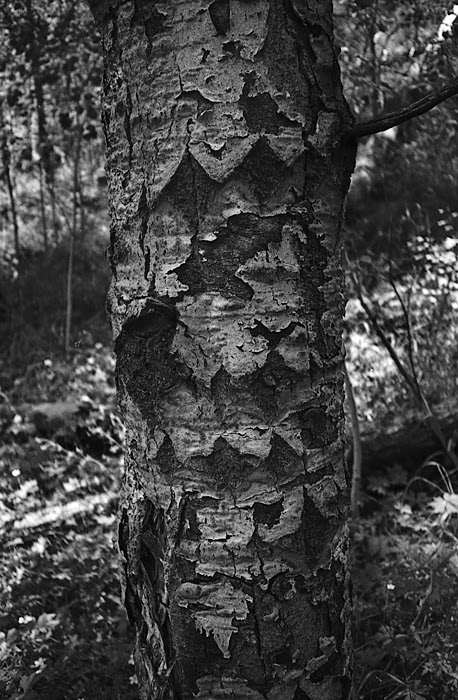 We took a Sunday drive along the Rio Guadalupe in the Santa Fe National Forest north of Albuquerque. 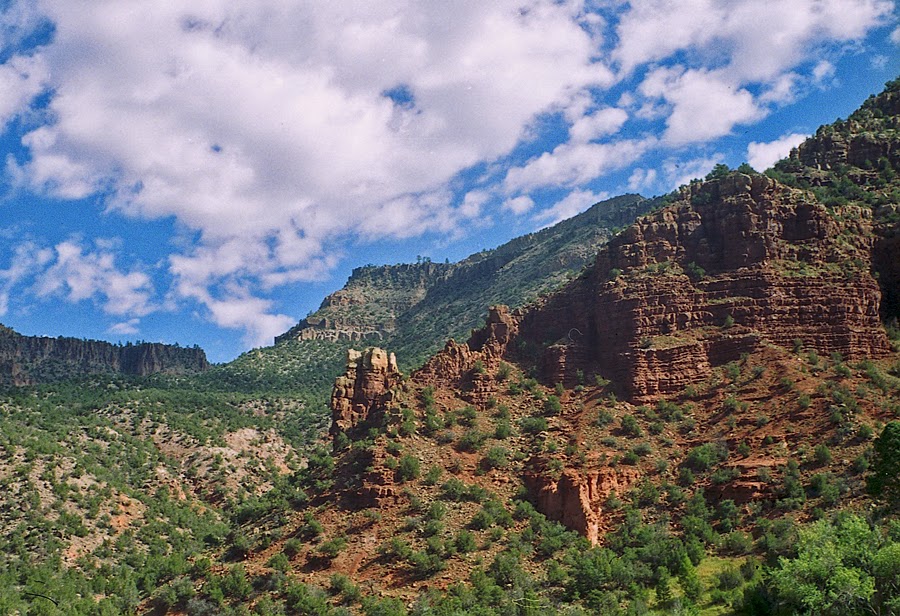 The narrow road originally was built for a railroad to haul logs down to the the big mill that was located near where we live.  The Gilman tunnels had to be cut to allow passage through the narrowest part of the canyon. 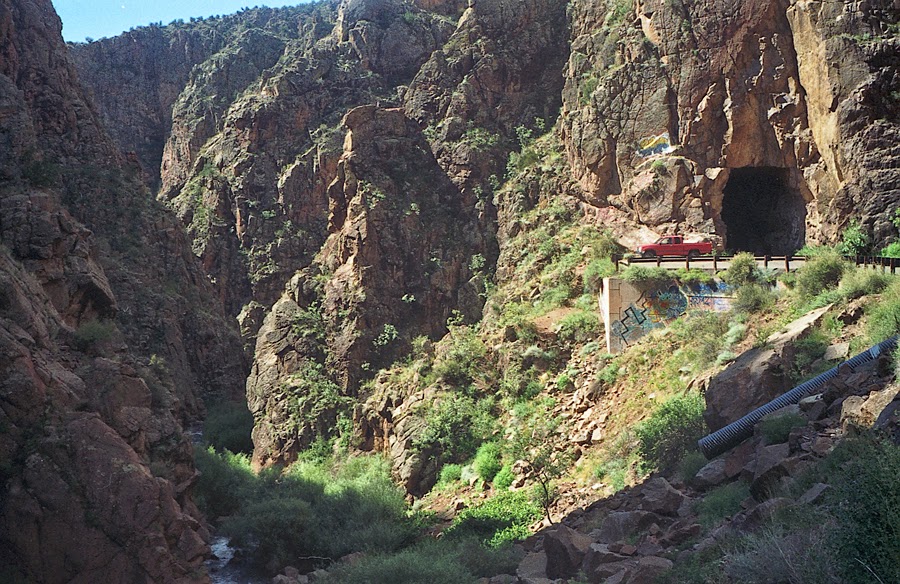 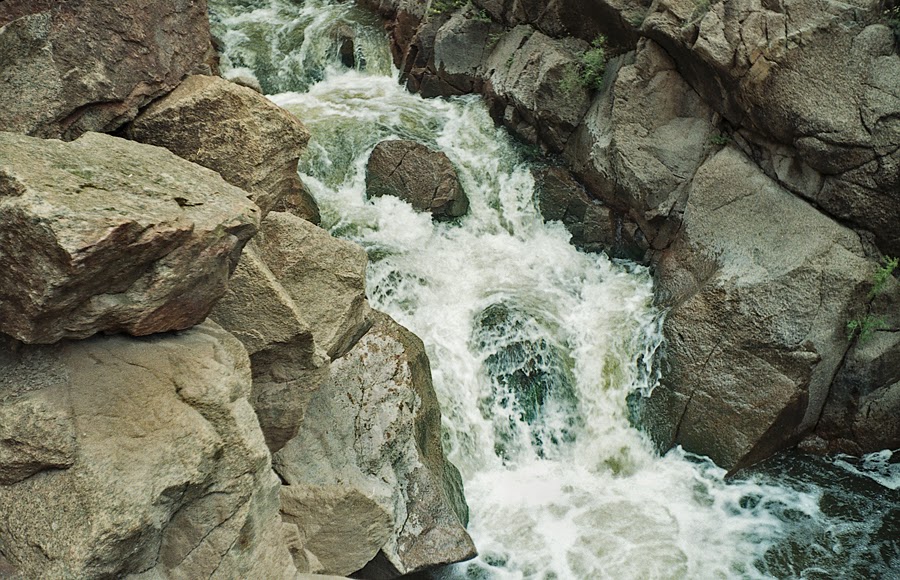 About a hundred yards north of the tunnel we found this rock climber testing her skills on the sheer face of the canyon. 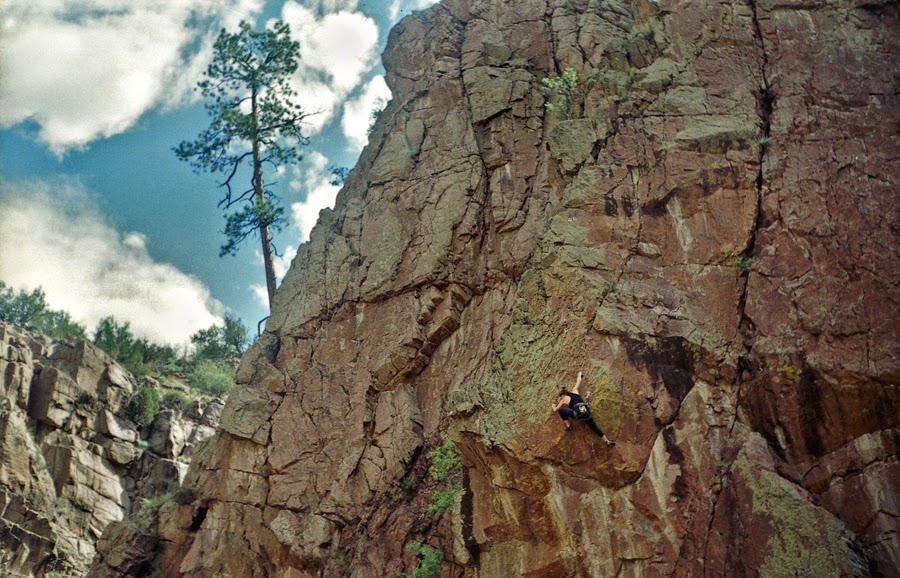 There were some pitons and carabiners in place on the wall.  She looped her rope through them as she ascended.  Her partner belayed her from below and was able to stop a fall about half way up. 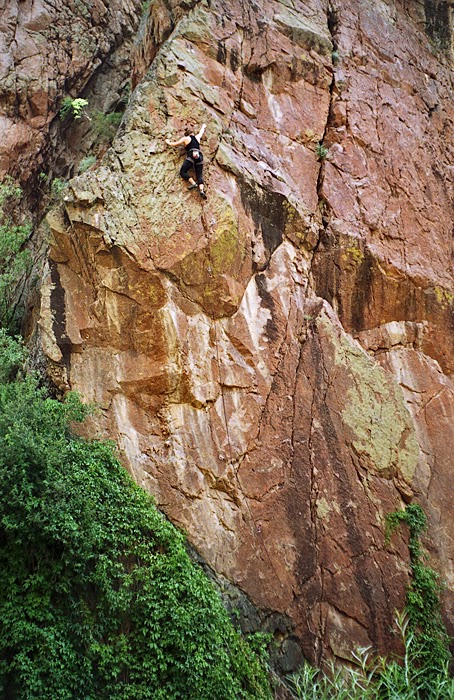 I was generally pleased with the performance of the Contessa 35 with its Tessar lens.  The rangefinder is very accurate, but the tinted finder is a little dim in low light. 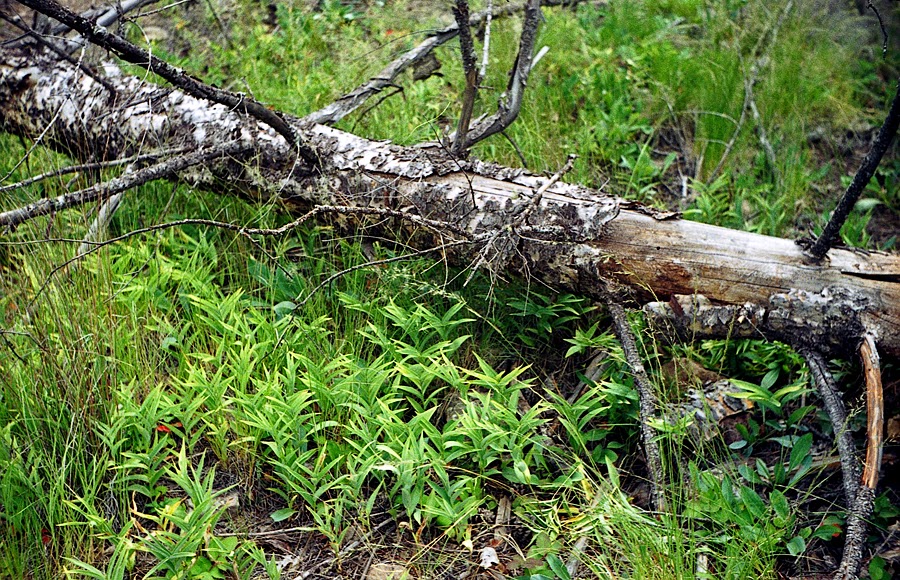 When I got home I took the top off the camera and cleaned the optics.  That didn't improve the brightness much, but opening up the camera did give me the chance to appreciate the extraordinary quality of the workmanship that Zeiss put into this compact 35.  By following Mike Elek's fine instructions I was also able to get the lightmeter working.
Posted by Mike at 11:29 AM 1 comment: 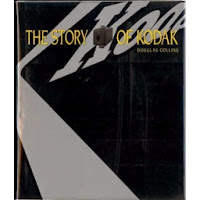 I recently came across some references to a lavishly produced book entitled The Story of Kodak by Douglas Collins.  When I looked up the book at Amazon I found that it had been published in 1990 and -- much to my surprise -- a "very good" used copy could be had for less than a dollar.  Even with the added four dollars for shipping, I would still be out only about five bucks to own a copy.

The author, Collins, writes resonably well and he tells some pretty good stories about the founding and development of Kodak throughout the Twentieth Century.  As is clear in the Acknowledgments, however, his primary sources were Kodak publicity people and the book is quite clearly an officially-sanctioned history of the company.

Given that caveat, there are some interesting things to be found in Collins' account and I learned quite a lot about some of the major players in the company's history including the founder, George Eastman, the company's first research director, Kenneth Mees, and the pair of musician/scientists who invented Kodachrome,  Leopold Godowsky, Jr. and Leopold Mannes.  The real value of the book, though, is to be found in the final chapter in which Collins becomes the mouthpiece for the delusional vision of the company's directors about The Future of Photography that would quickly bring the giant of the photo world to its knees.

Collins briefly quotes the opposed opinions of an academic and a professional photographer about the likelihood of electronic imaging replacing the use of film in photography.  He then says:


"Between these two positions lies the question of whether Kodak should aggressively enter the business of electronic image making.  Simply put, will video render silver-halide photography a quaint, antique way of making pictures?  Kodak analysts think not.  By all accounts film remains and will continue to remain the preferred medium for picture taking...

...One Kodak executive has speculated that electronic imaging is currently about where the video-cassette recording industry was ten years ago, and that it will take at least that long for its impact to be felt.
For amateurs then, despite the imminent arrival of electronics, the chemically produced photograph is still the established and favored way to make visual records.  The same is true of televised news, the demand for silver-halide pictures shows no signs of decreasing...

...The world may be linked by electronic images, but the act of sitting in a darkened theater and watching events unfold on the silver screen seems to special to be replaced by more private forms of entertainment."


All that seems to be an amazing lack of foresight for a company that had nearly limitless resources of information and expertise.  Certainly, much of the failure to come at all close to predicting the near future can be attributed to inertia and self-delusion.  I suspect, however, that what was of more importance was financial skulduggery and the push for short-term personal gain by upper management -- the same kind of forces that drove the general recessionary crash of 2008.  Collins' account, of course, sheds no light on those crucial internal events in the company's Rochester headquarters.

So, there is another book to be written about how it all came apart at Kodak.  Perhaps more importantly there is also a book which might be written about the company's real accomplishments and the people who made them happen beyond the few top dogs Collins talks about.  What is most interesting about his cast of characters is the omission of so many really important ones including the scientists, engineers and designers directly responsible for so much of the innovation in photographic imagery during the recently-concluded Century.  For instance, Rudolf Kingslake, the great Kodak lens designer, does not even rate a listing in Collins' lengthy index.

The Wikipedia page about Eastman Kodak fills in a few of the gaps in the Collins narative and Google searches on names including Rudolf Kingslake, Arthur H. Crapsey, Jr., and Miller R. Hutchison, Jr. will turn up useful nuggets.
Posted by Mike at 9:12 PM No comments:

I stopped by the Museum of Natural History this morning with my Welta Perle.  The compact folder was loaded with TMAX 400 film. 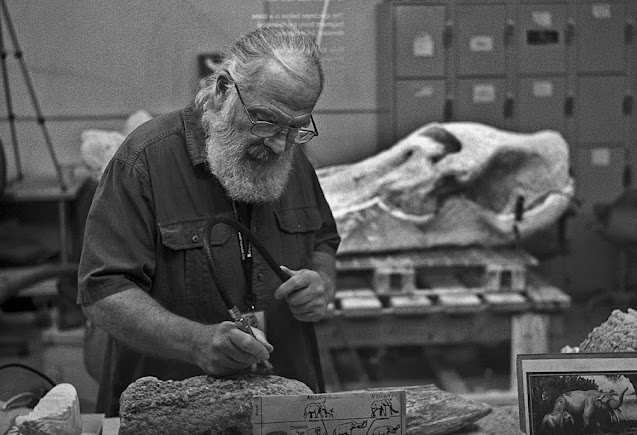 The preparator was carefully grinding away the rock surrounding one of four tusks belonging to an ancient species of elephant which roamed southern New Mexico about three million years ago.  Behind him on the bench is the complete skull of a stegomastadon from the same era that was recently discoverd on the beach at  Elephant Butte Reservoir.
Posted by Mike at 7:03 PM No comments:

I've made a lot of pictures of the mountain lions at the Rio Grande Zoo.  Several years before we moved to Albuquerque I met up with a cougar in the wild.  I didn't get a photograph at the time, but the memory is indelible.

When we first came to Las Cruces I used to spend much of my free time exploring the Organ Mountains that are just a few miles to the east of town. It is a small but rugged chain that rises up suddenly out of the surrounding Chihuahuan Desert flatlands, like many of New Mexico's mountains. I was back in the Organs recently, one of the very few times I have visited them in many years now. My last old dog is no longer up for such hikes, so I was alone.

I went up over the first set up steep hills and down into a valley that has a narrow streambed that snakes east to west out of the peaks. I shot a few pictures of the hills and plant life, including some fall foliage in the bottom of the arroyo. I was surprised at that point to hear quite close by a yowling cat sound; it was the same kind of ready-to-fight call that our housecat, Richard, makes when he spots a coyote or a rattler through the south patio windows. This sound had a good deal more timbre to it, though, and I began to hope that it was a bobcat or smaller. Of course, it was a mountain lion.

The big cat jumped down into the dry stream bed about fifteen feet from me, way too far inside my comfort zone. I could only clearly see its head through the boulders and brush. I very briefly considered trying to get a picture of the animal, but my old folding camera was not cocked or focused, and I felt that I could not afford to let my attention stray from the nearby cat because it was not more than a jump-and-a-half distant from me. On thinking about the situation later I surmised that the noisy and aggressive approach probably meant that the lion was a female with nearby cubs. I think she was just acting the way she might if a wandering male cougar had come into her territory.

I had read enough accounts of lion attacks to understand their quickness and power. One doesn't want to run from any aggressive wild animal, but unlike similar confrontations with bears, there seems not to be an option with the big cats of playing dead. If attacked, one is well advised to fight just as hard as possible; once those teeth are into the windpipe there is no appeal. As I looked into her large, dark eyes in the space of a few brief moments, it was clear to me that the lion was quickly going through the same set of calculations that I was.

It seemed to me at that point that the only practical alternative was to take the initiative. I stepped forward, threw up my arms and yelled at the cat. She turned away, still looking in my direction. Then, with a single bound she was gone, only briefly showing me her tawny back and long, powerful-looking tail. After the first leap, there was no sound of her movement through the thick brush of the arroyo bottom.

I immediately began moving cautiously up the arroyo. It seemed likely the cat would not follow, but I still paid careful attention to my backtrack. After travelling about a hundred yards, I moved up the slope out of the arroyo bottom and carefully scanned my surroundings, starting with the near ground and then out to the middle and far distance. I could hear some jays and other birds making some noise quite far to the west, so it seemed that the cat was continuing to head away from me. I shot a few more pictures, but had some difficulty concentrating on the task, and I decided to head back to the car. I kept to the high ground north of the arroyo and eventually put a big hill between me and the valley.

From the ridge crest, I could see the great number of houses that have been built close up to the flanks of the Organs in the past few years. My guess is that their owners are experiencing some missing small pets. I'll be surprised if there are not also some reports of unfortunate human-cat encounters in the not far future. My sympathies will be more with the mountain lions. As for me, I'm sure I'll return to explore the Organs again, but I'll probably find some sturdy dog to take along.

(My favorite cougar shot at the zoo was made in 2008 with my trusty old Spotmatic)
Posted by Mike at 6:29 PM No comments: