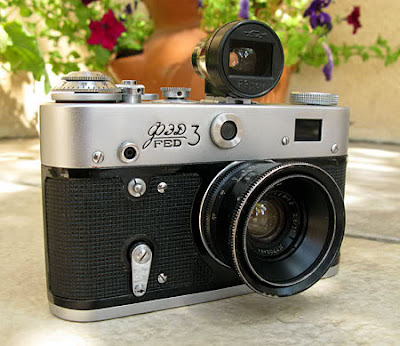 The FED 3 was produced in the Soviet Union from 1962 to 1980. The long production run can be accounted for by the incorporation of a number of design enhancements that were lacking in earlier Leica-copy cameras. In addition to a solid, well-made feel and uncluttered look, the camera by 1964 had a rapid advance lever. There was also a removable back, a fixed take-up spool, and shutter speeds from 1 to 1/500 seconds. A variety of Leica-thread-mount (LTM) normal lenses were supplied with the camera over the years; mine came with an Industar 3.5/50. The viewfinder/rangefinder is reasonably bright, but lacks paralax correction or a bright-line frame. Lateral adjustment of the rangefinder on this camera is done very easily with an adjustment screw from the camera front after the removal of a small cover screw.

While a lot of thought went into the FED 3 design to make it better than its predecessors, there are a couple small feature changes which many users would have liked. A rewind crank would have speeded things up, though that may have been purposefully omitted in the interest of robustness. From a functional standpoint, the omission of strap lugs may be more significant, and that is compounded by a never-ready case with the top section riveted to the back of the case. One way to sling the camera more handily around your neck is to cut around the rivet/snap to separate the back from the rest of the case; there's an illustration at Matt Denton's site of that procedure.

Perhaps the best reason for getting one of the LTM cameras is the availability of some very nice and inexpensive Soviet-era lenses, most of them copies of Leitz and Zeiss designs. I received as a gift from a generous on-line friend the highly regarded 2.8/55 Industar-61. I also obtained a recently-serviced 3.5/35mm Jupiter 12 in trade for my old Dolly Super Sport. The latter wide-angle lens is one of my favorites for 35mm work, and I already had a very nice accessory viewfinder which I had used with my other FSU camera, a Kiev IIa.

I've been impressed with the FED 3's operation in the short time I have worked with it. The film advance is quite smooth and snaps back well. The shutter appears accurate, and it seems somewhat less noisy than earlier models. The camera's controls are easily accessed. Like most of these Soviet era cameras, the FED 3 shutter demands that the shutter be cocked with the film advance prior to setting or changing the shutter speed. I did see small amount of light leakage evident along one edge of the film I put through the camera. According to a note a saw by Rick Oleson, the light may be coming in over the edge of the shutter curtain. I added a little light seal along the shutter curtain channel, but haven't yet tested the effectiveness of that fix. I later learned that an easier fix might just be to put on a lens cap before rewinding the film.

Some examples from the FED 3 fitted with the Jupiter 12 lens: 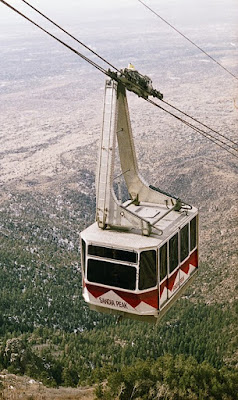 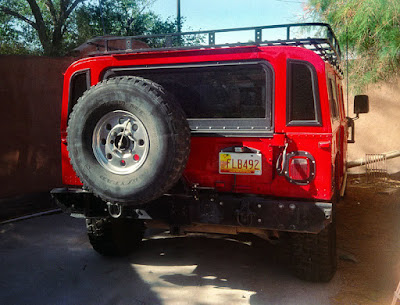 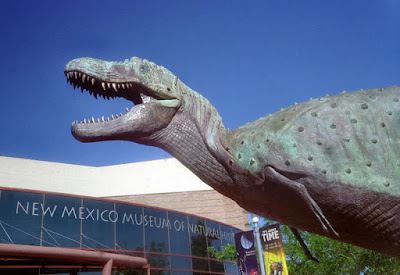 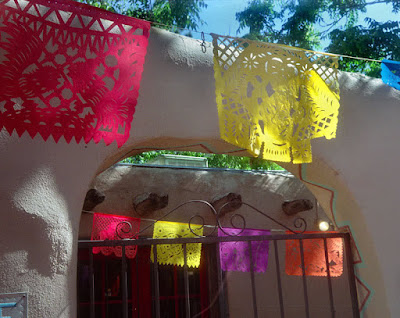 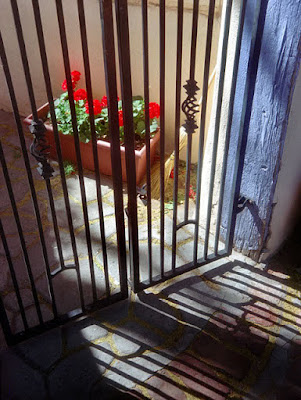 Digging around in my refrigerator bin for film, I found a roll of Kodak B&W 400, a C-41 film that is processed in the same chemistry as color negative film.  I shot the roll in my Kodak Retina lla and took it along with the color roll from my Vito II to Picture Perfect.

I used to shoot a lot of this stuff as it was cheap, nearly grainless and wide-latitude.  You can still get it on line, but the cheapest I've seen is $6.50 per roll at B&H Photo Video.  Add in shipping and processing, and you're looking at fifteen bucks for a roll of negs -- more than I'm willing to spend these days.  It does make some nice pictures, though.
Posted by Mike at 10:01 AM 1 comment:

The only place I know in Albuquerque that will still locally process film is Picture Perfect at the corner of Menaul and Juan Tabó. 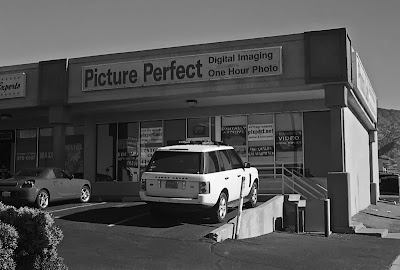 Picture Perfect will process any kind of film.  If you get it in early, you might get it back the same day.  They also do digital, and they will accept work by snail mail or email.  Film processing costs $7 per roll.

Here are some samples of their processing, shot with my Voigtlander Vito II on Fuji 200: 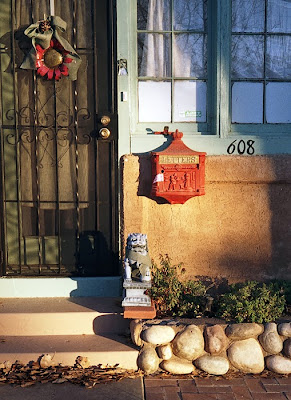 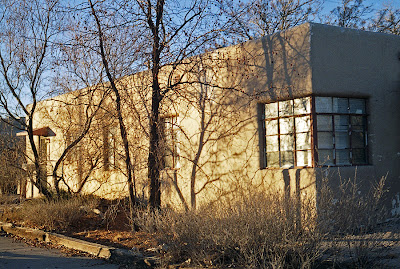 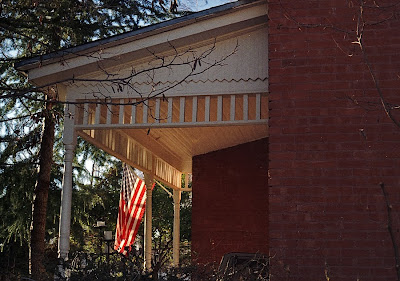 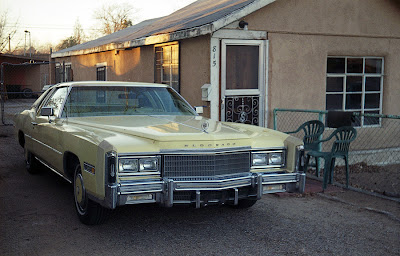 I only used Picture Perfect a few times in the past when I could still go down to my corner Walgreen's and get my color negs back in as little as twenty minutes.  Of course, that was only good for 35mm, and Picture Perfect could dunk my medium format color and get it back within a day.  I would have been happy to use them for all my color work, but they are located clear across town and there was considerable added time and expense as a result.  Now, I'm having to rethink the process since Walgreens, Walmart, Target, CVS and Costco have all gotten out of the 1-hour film business.
Posted by Mike at 9:34 AM 3 comments: 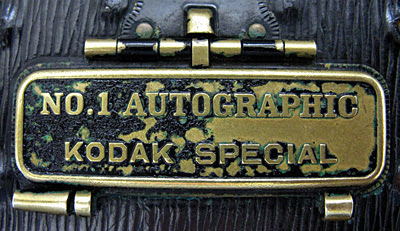 I took my No.1 Autographic Kodak Special to the Albuquerque train station.  The Amtrak Express was being fueled for a trip north. 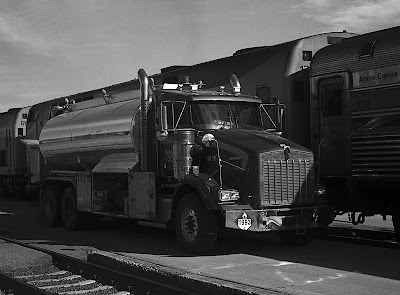 With its high-res Tessar lens and a snappy Wollensak Optimo shutter, this is my favorite Kodak.  I would shoot it more often were it not for a persistent light leak that I haven't been able to stamp out.  That is not for lack of trying.  The commonest source of such problems is pinholes in the bellows.  I did find some early on which I was able to eliminate with opaque fabric paint. 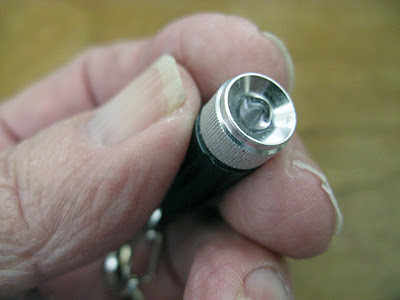 My usual routine in looking for the source of light leaks is to extend the bellows, open the camera back and hold the camera up to the sun.  Usually, pinhole leaks will be visible as bright specks of light in the corners and creases of the bellows.  Not all can be found in that way, however, so I usually then go on to inspect the bellows in the dark using a small led light like the keychain flashlight above.  Having meticulously examined the bellows, I'm suspicious that the light leak in the No.1 Special may be somewhere in the slide-open back.  I've added some light seal material to the back as well as half-covering the ruby window from the inside and putting a strip of black tape over the outside which I lift only when advancing the film.  No luck so far.
Posted by Mike at 11:26 AM 1 comment: