I loaded some Fuji 200 color into my point-and-shoot pinhole and took a walk in the neighborhood.  It was the first time in quite a while that I had made pinhole images. 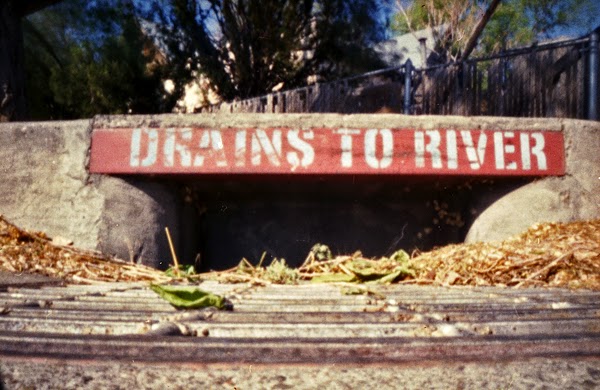 I thought I might use up the roll in a couple sessions, but I was surprised to find that I had all twenty-four frames accounted for in about an hour. 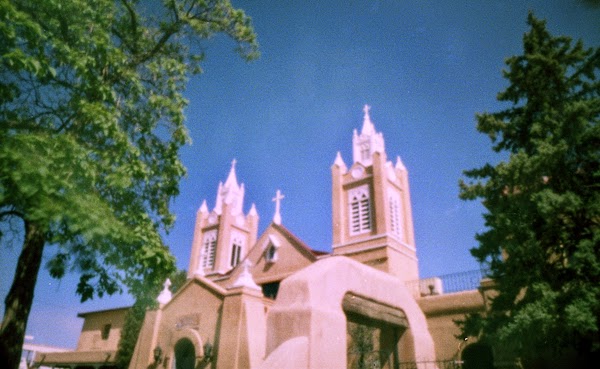 I spent about a year shooting mostly pinhole some time ago.  I used a medium format camera and shot only black and white.  I was pleased with my results in the end, but also felt I had reached my limits with the medium and went back to shooting my regular old film cameras. 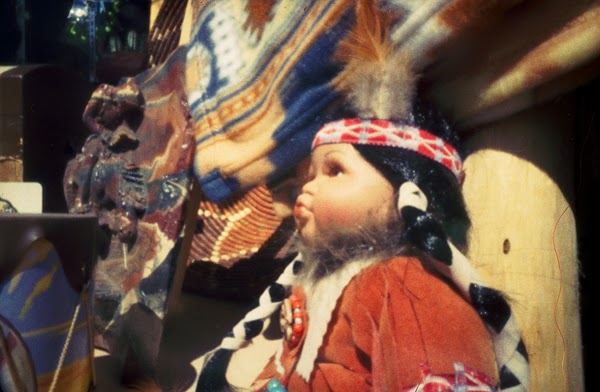 In evaluating my work with the pinhole, I discovered that the things I liked about the images were mostly not unique to pinhole cameras or technique.  Most of the effects could also be accomplished with cameras with lenses: small apertures, great depth of field, extreme wide angle, diffraction flare, low-angled perspective, near-far effects, motion blur.  In fact, a lot of that showed up in images made with the little Vivitar Ultra Wide and Slim with which I have made a lot of pictures. 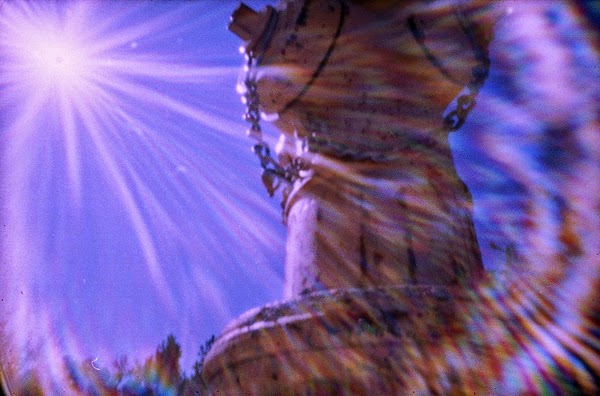 Still, pinhole brings all those things together, and it is fun to try to bring it under control and to make it all work effectively.  It is also a good way to learn a lot of technique that carries over into lens-based photography. 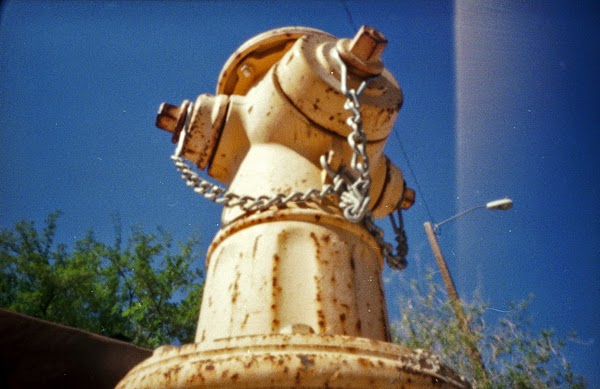 Pinhole also has the virtue of producing unexpected and surprising results even when you think you have all the variables accounted for.  It can lead you into exciting and unexplored territory. 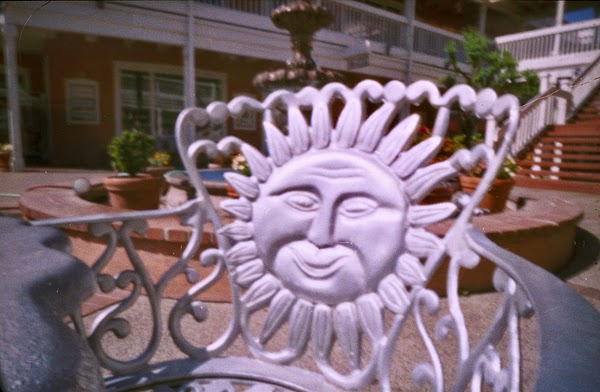 Every pinhole camera I have worked with has its own quirks, and it takes some time to learn how to aim and compose with some confidence.  Exposure in good daylight is pretty simple; one second gets it about right for me nearly every time.  In low light, the game gets trickier as films vary considerably in their capacity to record images with very long exposure times. 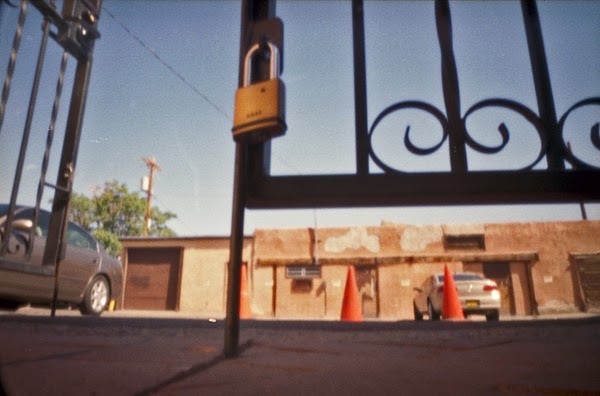 Part of the reward of pinholing is making your own equipment.  It can be as simple as a matchbox and a bit of foil.  However, using a real camera body can facilitate the process quite a bit as that takes care of film transport, light tightness, and can even provide an easy-to-operate shutter. 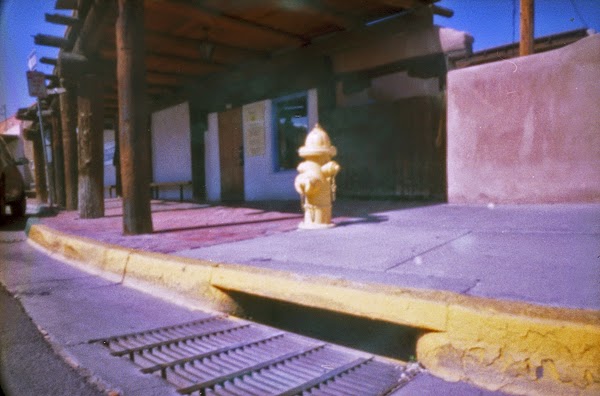 Perhaps the main advantage of shooting pinhole is that it lets you put aside preconceptions of how images should be made or how they should look.  It frees you to have fun and learn at the same time. 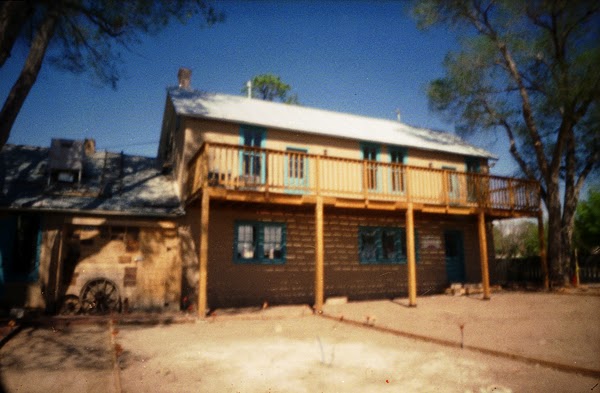 The Navajo people may have resided in the area of Crow Canyon for several centuries.  They probably left it to move westward around 1700.  By that time, the Spanish had reestablished their control of the area after the suppression of the Pueblo Revolt. 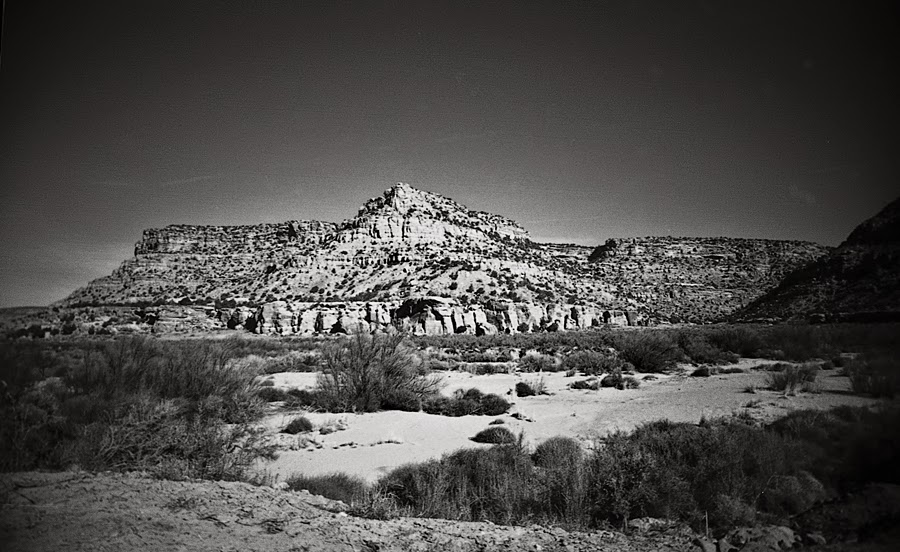 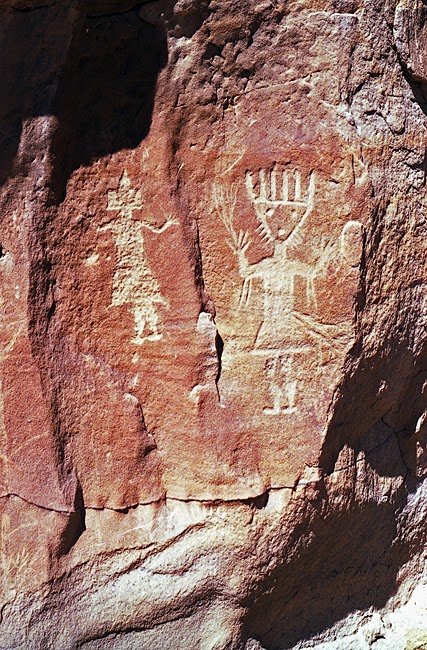 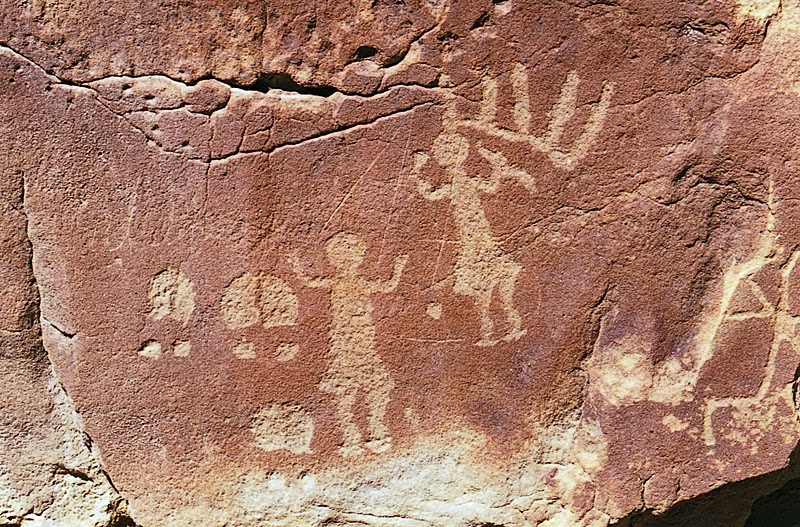 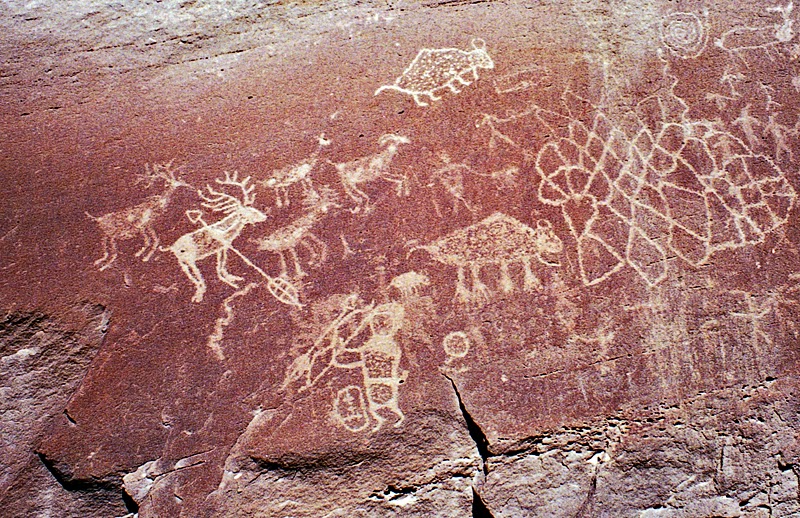 This hunting scene shows that the Navajo were hunters of big game including elk, bison and big horn sheep.  It seems as if the animals are being driven into a large net to the right.  Long, knee-high nets were used by high desert peoples for trapping jackrabbits.  This is the only example I have seen  of such a large-scale effort.  It is hard to believe that large animals could have been captured in this manner, but the figures that appear to be holding the net seem to be the right scale.
Posted by Mike at 2:16 PM 2 comments: 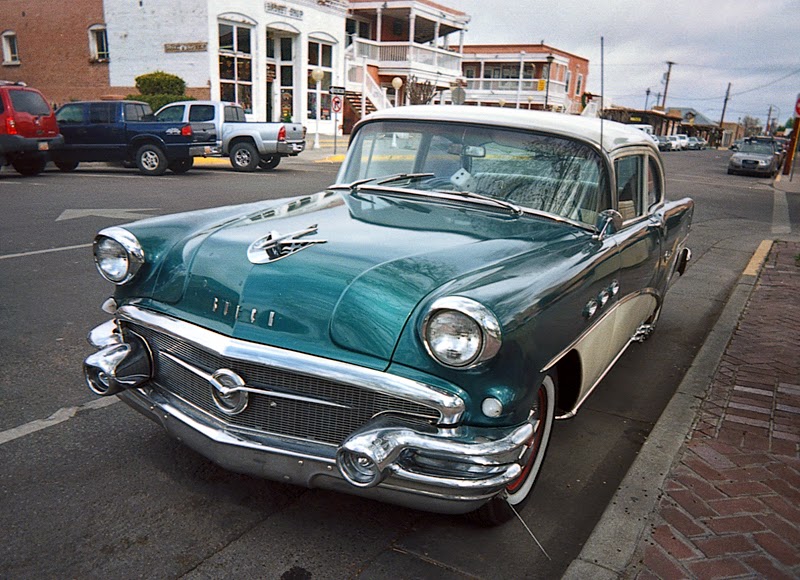 There is often an informal car show on Saturday mornings in Albuquerque's Old Town.
Posted by Mike at 1:37 PM 1 comment:

We were pleased recently to have the opportunity to visit the Crow Canyon petroglyph site in northwestern New Mexico.  The twenty-mile dirt road into the site is well maintained to support access to the area's oil and gas wells.  However, it is a long enough journey to discourage casual visitors, and we saw no other people in the morning we spent exploring the canyon. 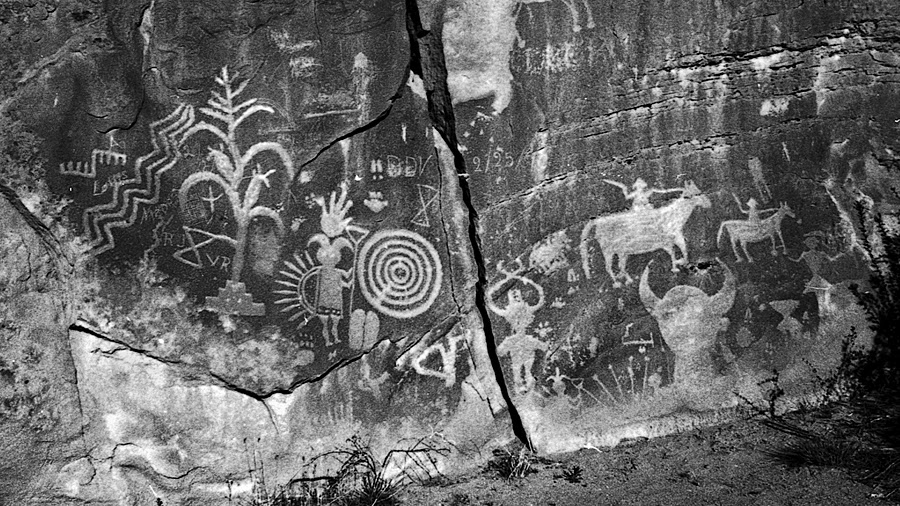 Crow Canyon is well-known to rock art enthusiasts, and photographs are easy to find on the web.  Most descriptions accompanying the pictures reference the symbolic connections to the Navajo pantheon.  None I have come across, however, take note of the extraordinarily sophisticated technology on display in the rock art panels. 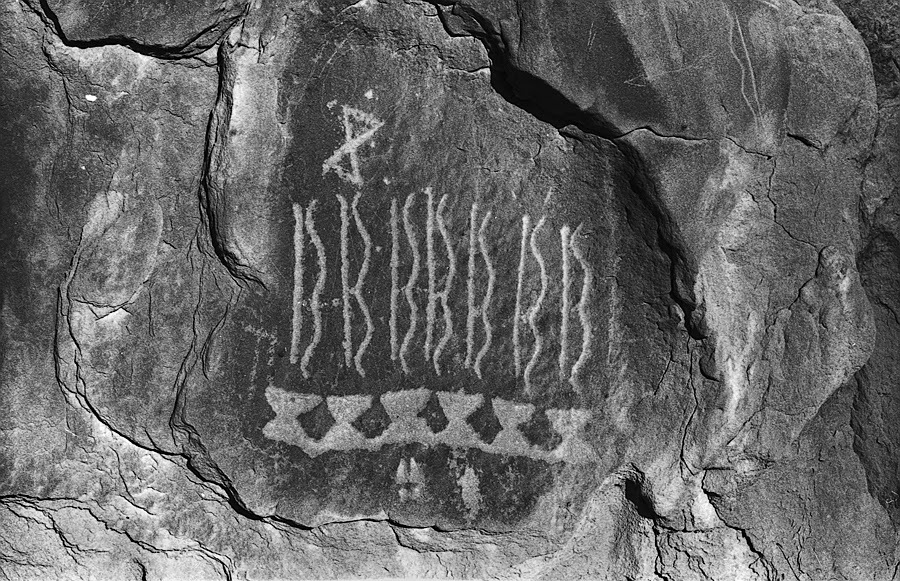 The bows depicted are all examples of the highest order of bow-making expertise, having a reflex, recurve design that implies composite construction with materials including wood, antler, horn, sinew, and hide glue. 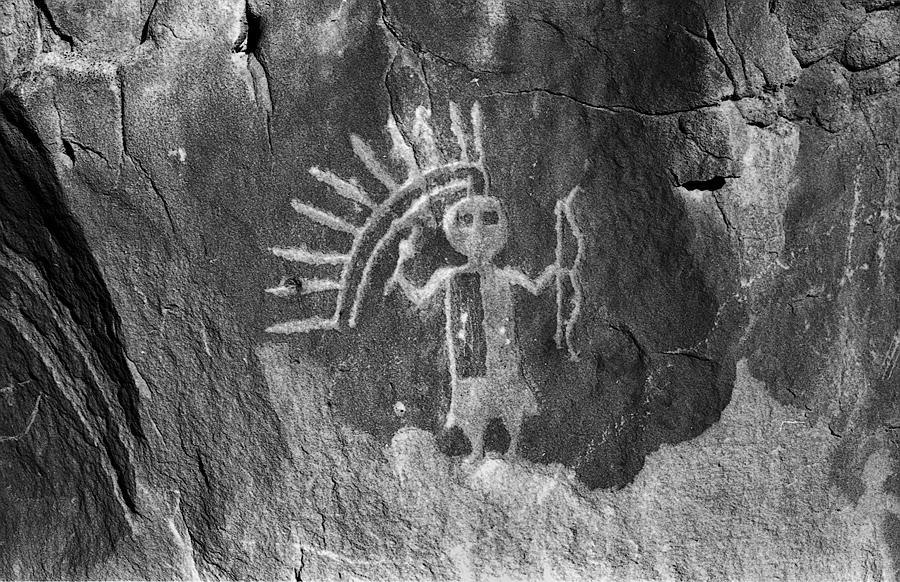 It is possible that the Athapaskan ancestors of the Navajo brought their knowledge of reflex and recurve bow design with them as they made their centuries-long migration from the far north.  In the arctic regions of the New World, there were no suitable wooden staves of sufficient length to make single-component self bows, so composite designs were a necessity.  Old World archers also developed radically-reflexed designs for their bows, but the impetus in that case was more oriented toward the functional advantage conferred by a compact form for use by mounted warriors and hunters.  Navajo adoption of a mobile horse culture facilitated by the Spanish invasion may have yielded a similar preference for a compact and powerful bow design.

Specific details of Navajo archery are hard to come by on the web. 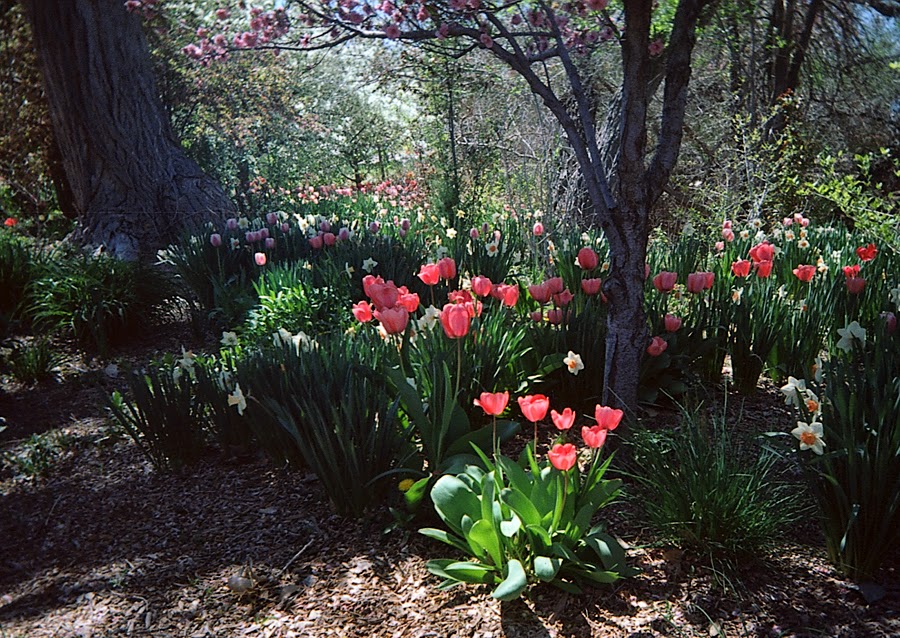 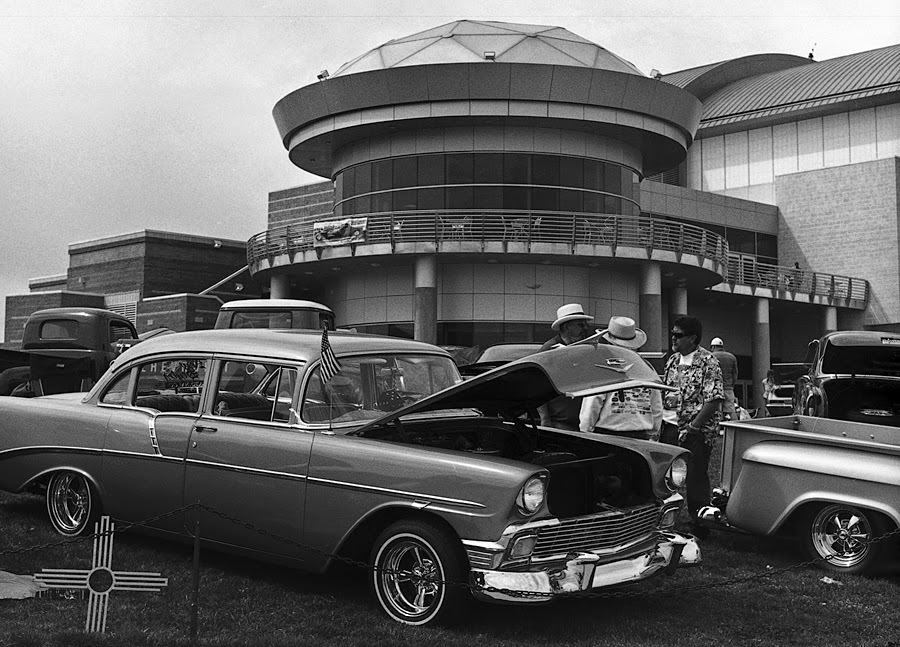 The first big show of the season took place on the grounds of Albuquerque's Balloon Museum.  It was sponsored by the Classic Chevy Club. 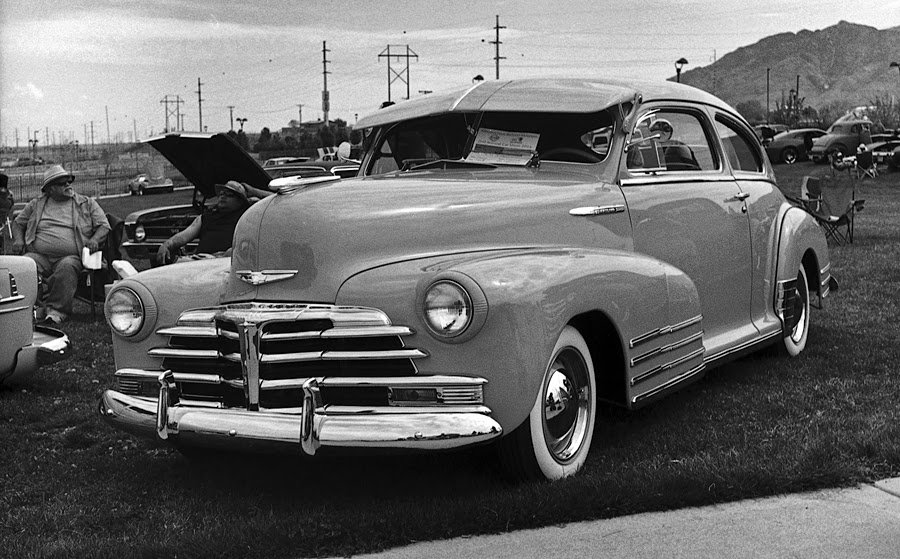 I didn't stay to see which car took the top honors.  The real show stealer for me was the 1934 Studebaker.  I had photographed it before, a few years ago, with my Pentax K1000 at the yearly Art Museum car show. 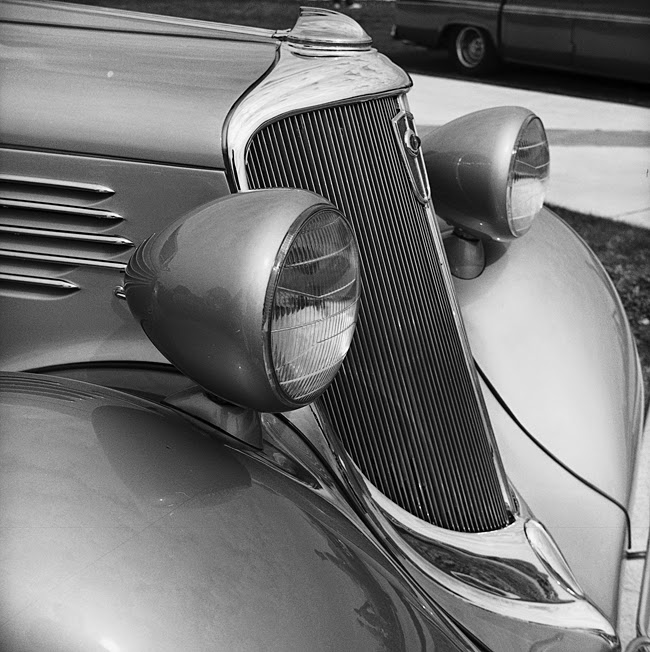 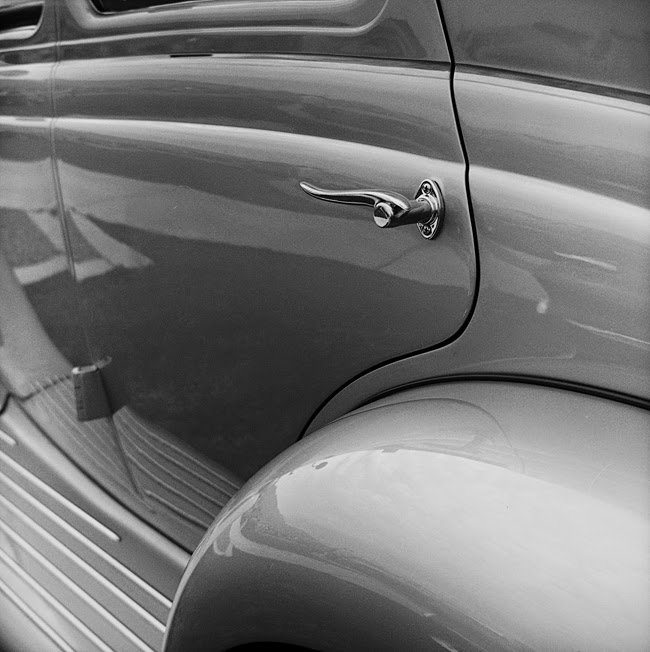 My camera at the show this time was my Mamiyaflex II, loaded with TMAX 400.
The tulips were shot at the Botanical Garden with the Vivitar Ultra Wide & Slim, loaded with Fuji 200.
Posted by Mike at 10:13 PM 2 comments: