I finally got around to shooting the C330 twin lens reflex with the 180mm lens.  That focal length on a 35mm camera would be a substantial telephoto, but on the 6x6 C330 it is still just in the portrait lens category. 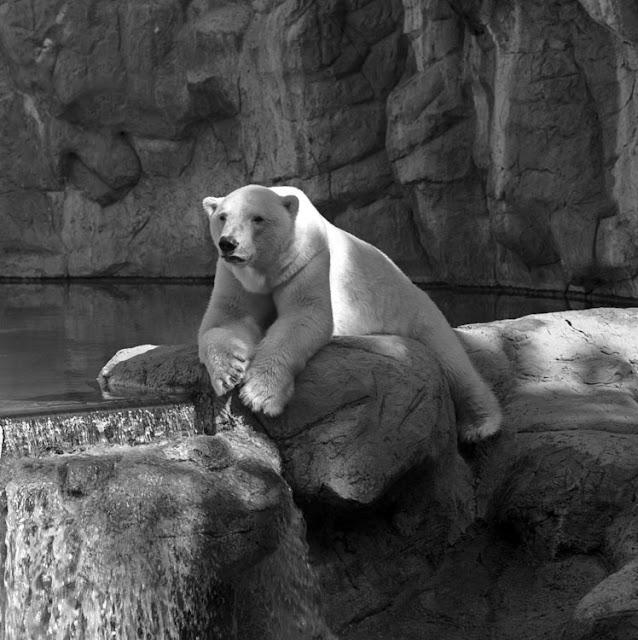 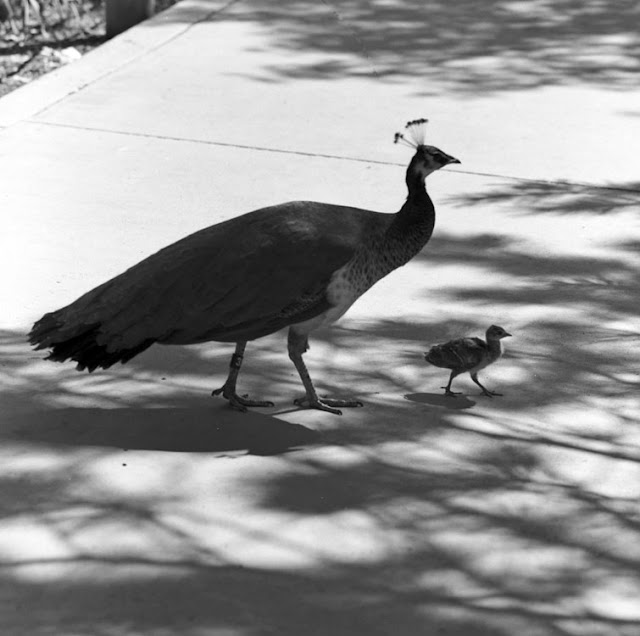 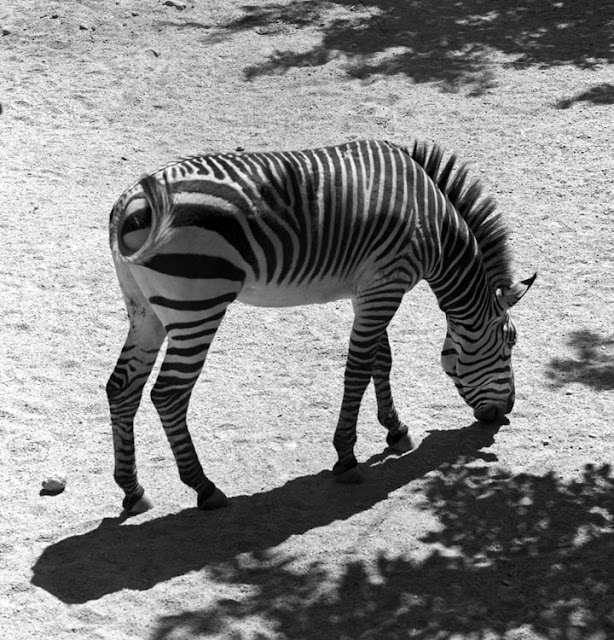 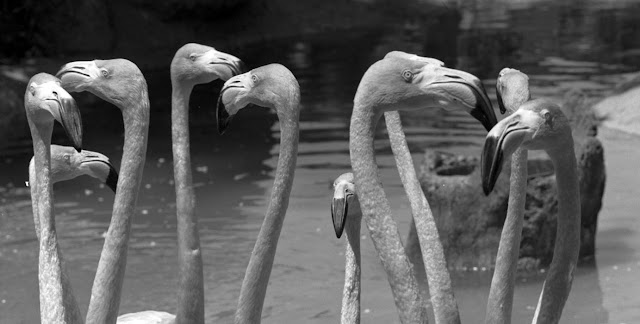 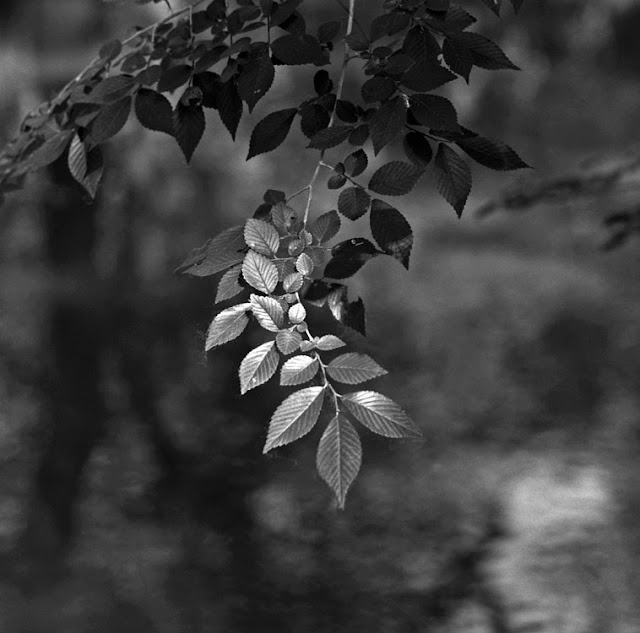 While the big 180 lens set adds to the already hefty size and weight of the camera I found that taking the time to get used to handling the camera was an effort well spent.  The accessory grip helps free up the right hand for adjusting focus and tripping the shutter.  The eye-level finder also makes the outfit more responsive to fluid photo scenes. 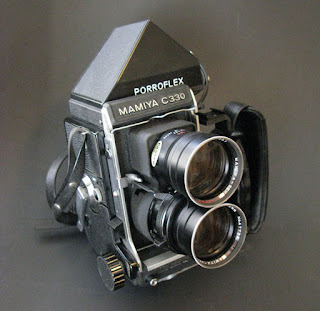 I probably won't make a lot more use of the 180mm lens set on the C330, but I am getting more comfortable with using the camera, and I'm looking forward to using it more often.
Posted by Mike at 7:19 AM 4 comments:

I took a morning walk on the grounds of the Rio Grande Nature Center.  The sun was already high in the sky by nine, so I was glad I had loaded some TMAX 400 film which copes well with contrasty lighting.  The big Mamiya C330 would have performed better for me if I had brought along a tripod, but the Porroflex finder let me make some shots that that would have required some athletic contortions with the waist-level finder. 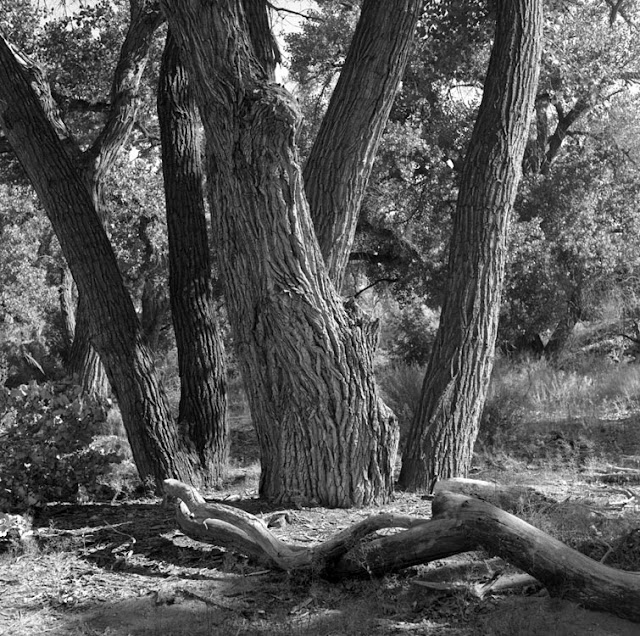 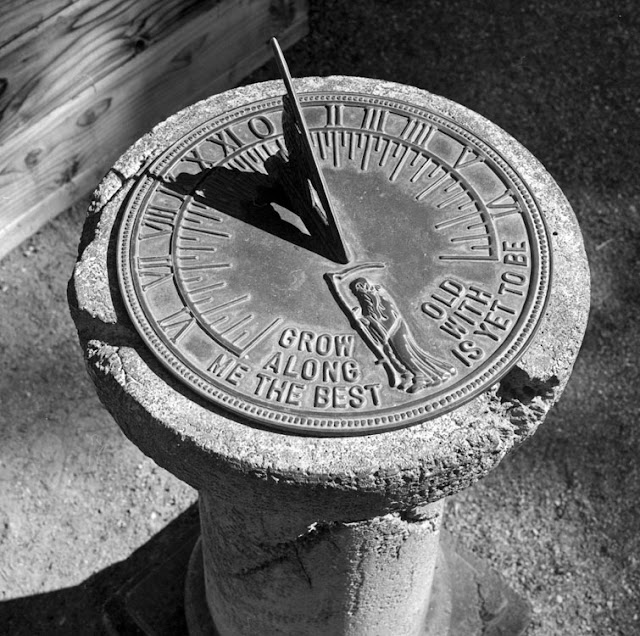 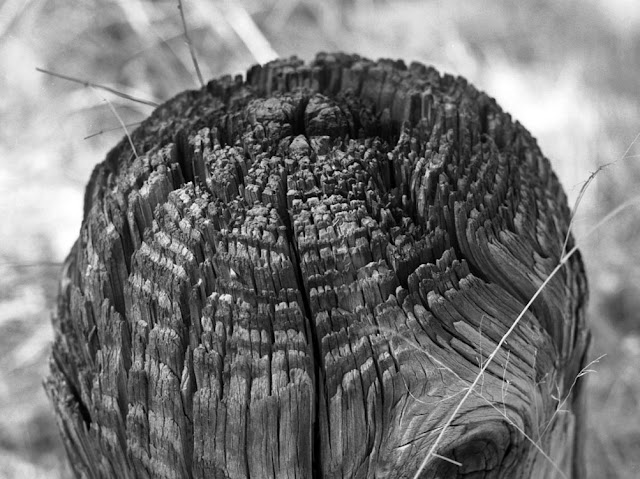 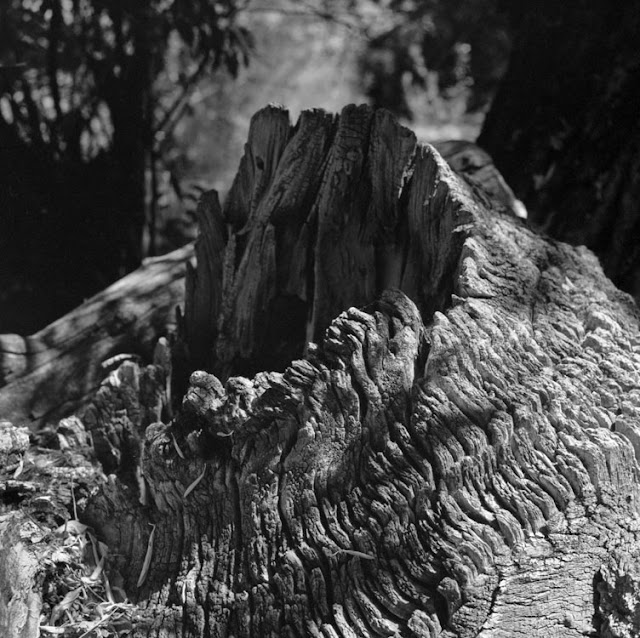 The C330 is unique in its capacity to focus and frame the image as close as 7 inches due to the bellows focusing and a moving bar in the viewfinder which shows the user how to vertically adjust the camera to compensate for the difference in views between the viewing and taking lenses.  At the same time, it is also necessary to pay attention to a scale in the viewfinder which indicates exposure compensation associated with the extension of the bellows.  For instance, with the bellows extended to focus on a subject about a foot from the camera, it is necessary to increase the aperture two stops to get proper exposure. 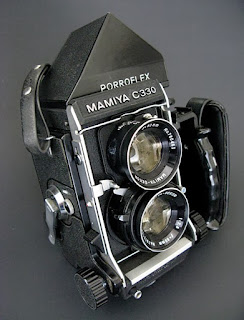 People in the Southwest have been keeping track of the sun's movements for a long time.  See teofilo's annual solstice blog post today about The Mesoamerican Context for Chaco Astronomy.
Posted by Mike at 6:04 AM 4 comments:

Stand development doesn't necessarily produce better results than many other techniques, but it is certainly simpler and less costly.  These images on Kentmere 100 were stand developed with 5ml of Rodinal in 500ml of distilled water, a 1:100 dilution.  That yields a developer cost of about sixteen cents per roll.  To that you have to add in the cost of fixer, distilled water and shipping charges, but the total per roll is still nearly negligible. 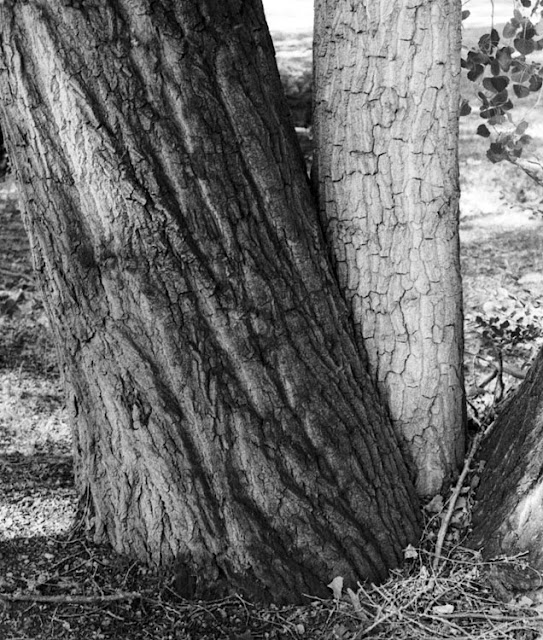 Time and temperature requirements for most processing procedures usually require quite precise control.  Those variables in stand development however are not critical.  In this case, I just used the developing solution at room temperature without recourse to a thermometer.  The developer was poured into the plastic film tank and the timer was set for thirty minutes after thirty seconds of initial agitation.  After that, I did not touch the tank until the buzzer sounded, at which point I agitated the tank for a few seconds and then left everything to sit for another thirty minutes. 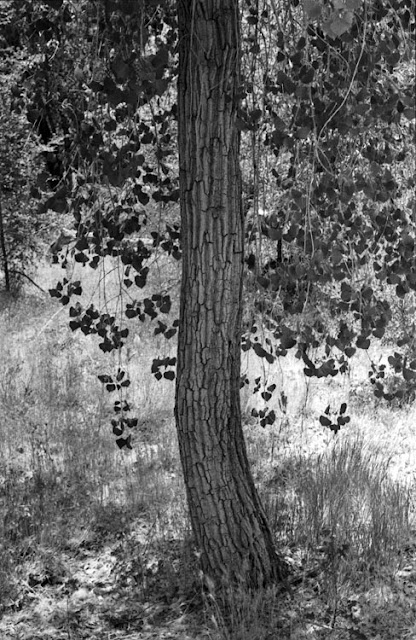 Another nice feature of the stand development process is that no allowance need be made for different films or film speeds. It doesn't matter if you are using a slow, fine grained film like Kentmere 100 or something faster like Tri-X. 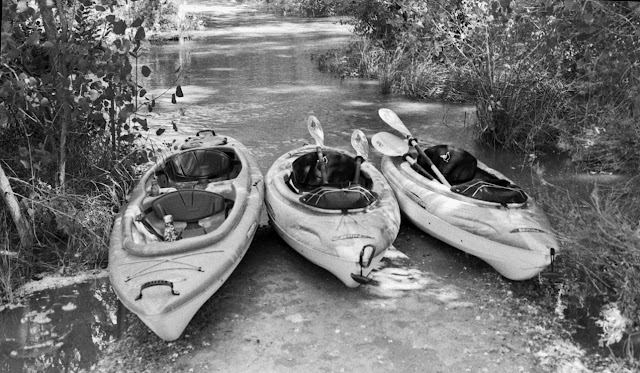 I have gotten similarly nice results from stand development using HC-110, and the cost is even slightly less as I have been able to use just 4ml of developer in 640ml of water for a dilution of 1:160. 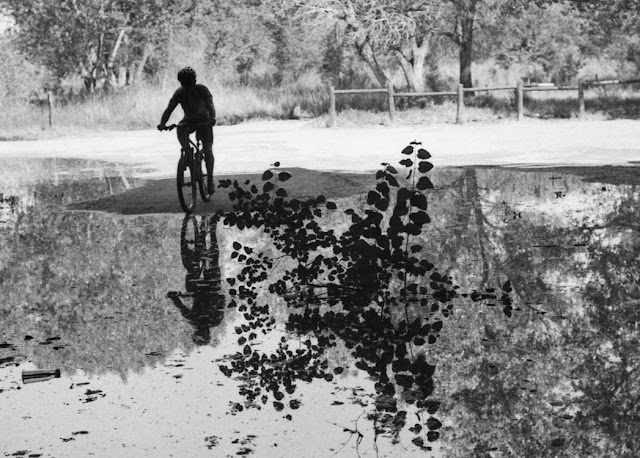 There are a lot of recipes for stand development available on the web which advise small differences in total time and dilutions, but it seems the results are little different.  A good overview of the process is given at the hjlphotos site. I'm liking my initial results from Arista.Edu Ultra 100, though I think can do better with some adjustments in exposure and processing. 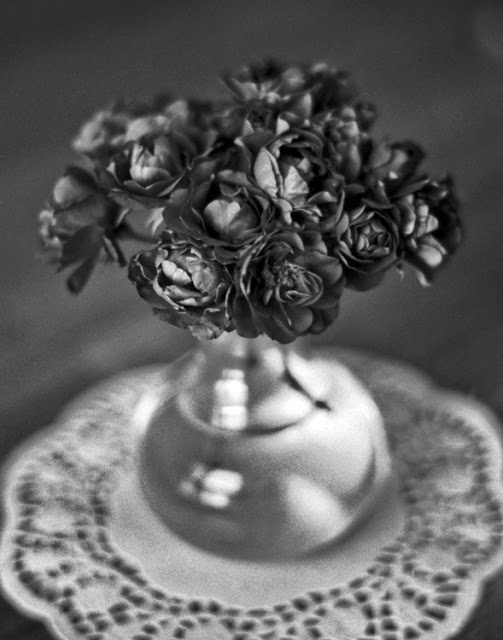 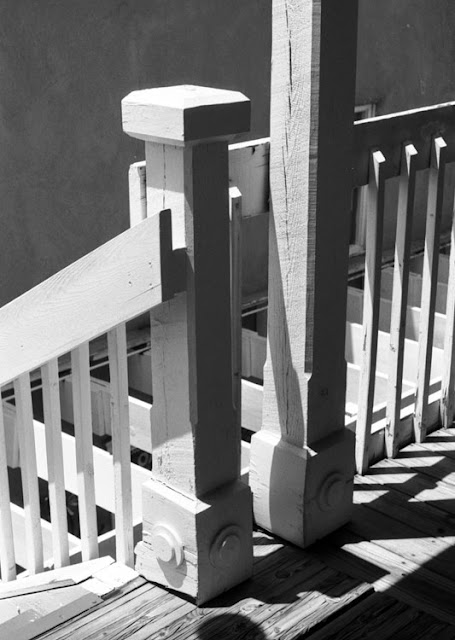 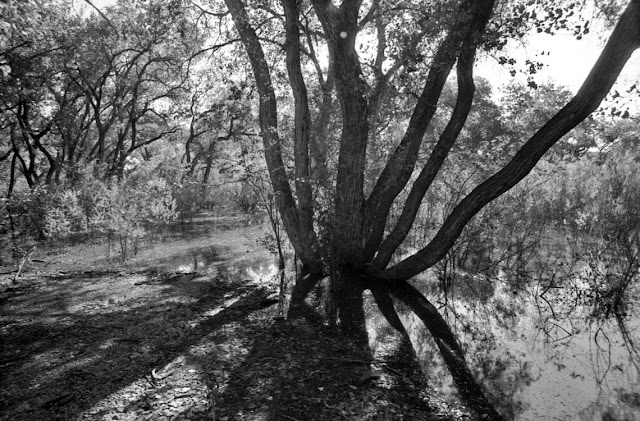 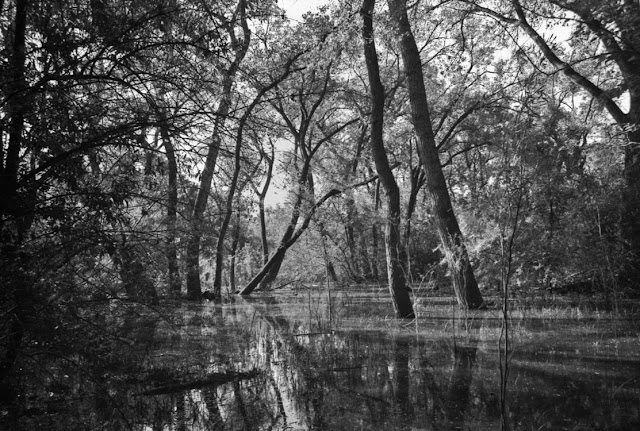