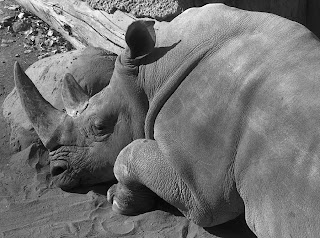 I photographed this fine little sculpture-fountain at the Botanic Garden yesterday. It is a subject I have photographed on other occasions with at least three other cameras. 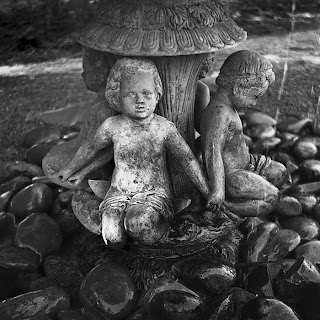 The boy with a swan became a popular subject for artists midway through the 19th Century. There are sculptures and fountains with this theme in many cities around the world. 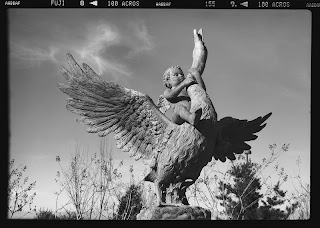 The inspiration for all the works of art on this theme was most certainly a depiction of a boy with a goose by the Greek sculptor, Boethus, dating from about 160BC. 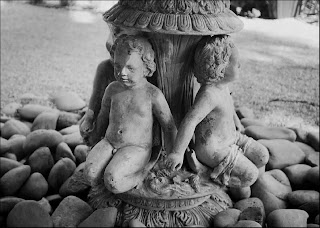 The fountain in Albuquerque's Botanic Garden appears to be a bronze casting, possibly from the early Twentieth Century. 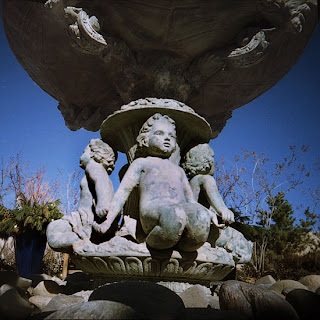 I spent some time this morning trolling the web for details of the history of simple cameras. I did turn up some interesting bits about that, but I also happened on some amazing stuff about modifying a couple of my favorite Vivitar plastic cameras, the Ultra Wide and Slim and the PN2011.

The articles by the acclaimed technical writer, Nano_Burger, are on the Instructables.com site. If you click on the above photos you will be magically transported to the associated articles.

I have to admit, while admiring the level of craftsmanship displayed by Nano_Burger, it is pretty unlikely that I will actually choose to hack my Vivitars. The truth is that I'm a pretty clumsy craftsman, and I fear I would damage my beloved but flimsy plastic cameras. I also tend to enjoy working with the challenge of simplicity which the plastic cameras provide.

Some of my favorites from the VUWS are contained in a Flickr-based slideshow: 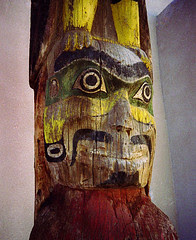 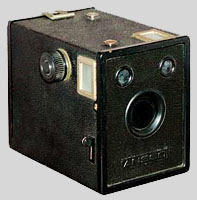 I was recently introduced to the work of Herman Krieger, a photographer living in Eugene, Oregon whose web site features a lot of black and white photo essays done with classic film cameras. Krieger uses some very fine classics including an Ikonta 6x6 rangefinder model, and his photos all have a crisp European style which probably can be attributed at least in part to thirty years residence in Holland. Interestingly, that same crisp style carries over to his pictures made with the simplest of cameras, an Ansco B-2 Cadet box camera.

When you first look at Krieger's photo essay entitled, "Along the Riverbank Bike Path with a 'Bent and a Box", you are going to find it hard to believe that these ultra-sharp images have come from such a modest camera. Everything pictured is in sharp focus, showing great depth of field, and even subjects in motion show none of the tell-tale blur that one would normally associate with box camera images. Scrolling down to the page bottom clears up the mystery.

Krieger explains that his extraordinary box camera images are the result of having made some relatively simple modifications to the camera's shutter:

"Original exposure setting is 1/25 at f16. By covering part
of the circular shutter opening with black electrical tape,
and placing a small washer over the aperture opening,
the exposure setting became 1/125 at f22. This enabled
the use of Kodak T-MAX 400 film with the camera."

Here is a picture of a similar shutter from one of my own Brownie Hawkeye Flash cameras which shows the components Krieger talks about. The shutter is held open with the "B" setting to give a clear view of the parts. 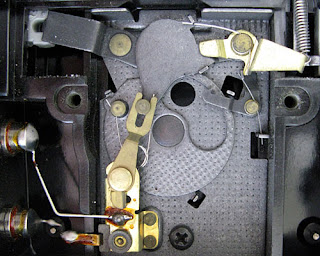 The round black hole is the aperture allowing light into the lens. When the shutter release is activated, the cover paddle is lifted and the kidney-shaped opening in the circular shutter plate rotates past the aperture, with the time of its passage being determined by the spring tension and the length of the kidney-shaped hole. At the end of the cycle, the paddle flips back down to cover the opening and the shutter disk rotates back to the starting position.

So if you want to modify a Hawkeye Flash as Krieger did the Ansco, you would reduce the size of the round aperture with a small washer and shorten the length of the kidney-shaped slot with some tape. The result will be greater image sharpness and depth of focus due to the small aperture. The shortened shutter speed greatly reduces the likelihood of camera jiggle at exposure, and also makes it possible to arrest moderate subject movements. The ability to use a faster film like TMAX 400 also enables a wider tonal range in high-contrast lighting situations.
Posted by Mike at 1:57 PM 4 comments: