I visited a used book store in Albuquerque recently and stumbled on a fine book: The Lost Amazon: The Photographic Journey of Richard Evans Schultes by Wade Davis. The story recounts episodes from the Harvard scientist's travels over three decades in the Northwest Amazon. Schultes brought the discipline of ethnobotany to life in the twentieth century, giving perspective to the work of the great naturalists of earlier centuries. In the process, he discovered hundreds of previously unknown plant species, concentrating primarily on hallucinogens and poisons developed over millennia by the indigenous peoples of the upper Amazon. Schultes also undertook the gargantuan task during wartime of tracking down examples of rubber trees in the Amazon forest which showed some blight resistance, offering the possibility of New World natural rubber plantations which had been impossible to sustain up to that point. As it turned out, the opportunity was squandered by U.S. bureaucrats and politicians who, in their ignorance and arrogance, believed that the petrochemical industry would be able to provide synthetics that would meet all needs.

As for the coincidence, in leafing through the magnificently produced book of photos and biographical notes I saw that I had inadvertently retraced a rather large part of Schultes' journeys when I visited the Northwest Amazon with four friends in 1960. In Schultes' fine photos, made with a Rolleiflex twin-lens camera, I recognized the ceremonial costumes of the Yucuna and Matapie of the Miritiparaná River. The pictures of small river launches on the wide Amazon tributaries and of dugout canoes being wrestled up through shallow rapids brought back a flood of memories from my twentieth year. At that point, I was only seven or eight years behind Schultes, but I don't recall anyone mentioning his name or his presence in the area, even though many people I met there must have known him. Quite likely, my poor language and social skills at the time kept me from appreciating the important part of the region's history represented by the scientist's passage. He was revered by the indigenous people everywhere he went because of the respectful manner in which he undertook his epic investigations which involved not only plant collecting, but also the unraveling of the story of how the native peoples made such sophisticated use of the plant life for medicinal, religious and practical purposes. I wonder now if the warm reception I received so often from people throughout the region was due in a large part to the legacy of good will which Schultes left behind.

My own travels were not guided by Schultes' sense of purpose, but the experience and my memories of the journey nevertheless had a formative influence for me throughout the years and decades since. I think the book about his epic journey and accomplishment will be a fine excuse to revisit those times, and perhaps to solidify some perspective on my recollections which I haven't taken the time to explore up to now.
Posted by Mike at 10:11 AM No comments: 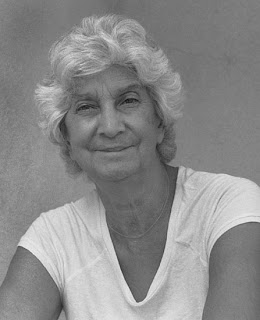 I've posted some portraits on the page about my FED 1g, the Leica copy built in the former Soviet Union in 1955. I thought the old Elmar-style lens performed admirably. Some of the photos seemed underexposed and very low contrast. I'm not sure if that was just an exposure error, or if the shutter wasn't working quite right. I'll shoot some more with the camera and decide if I need to get something done about the focal plane shutter.
Posted by Mike at 1:56 PM No comments: 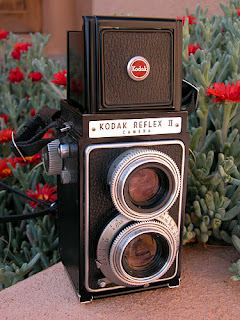 The Kodak Reflex II was the company's top-of-the-line twin-lens camera, appearing soon after WWII and incorporating many advances and innovations in design and construction. Both the taking and viewing lenses are sharp 4-element Anastars with Kodak's "Lumenized" anti-reflective coating. The big viewing lens, coupled with the viewscreen and a fresnel intensifier provides an exceptionally bright viewing image. The shuttered red window on the back is used only to position the first frame; after that the camera automatically handles frame spacing and counting. The Flash Kodamatic shutter features speeds from 1/2 to 1/300 seconds, plus T and B; it is cocked with an upswing of the release lever. Focusing is accomplished by turning either of the lenses which are coupled by external gear rings. The Reflex II is very solidly constructed with excellent materials and craftsmanship evident throughout.

To use the camera today, one needs to take into account the fact that it was designed around Kodak's 620 film format which is no longer available. My initial answer to that was to use 120 film with the spool ends trimmed down flush with the paper backing, which allows the film cartridge to fit into the camera. It is a tight fit, so it will be helpful for those using this method to unspool enough of the paper backing to allow the takeup spool to get a good grip before trying to push the cartridge into the feed side. Once in place, the film should move through the camera smoothly. More recently, I have begun re-rolling 120 film onto the old metal 620 spools, and this does smooth the film advance. Either way, there is some irregularity in the frame spacing, which may be the result of thinner backing paper on modern roll films. One easy solution to that is to just use the red window rather than depending on the camera's auto-frame spacing mechanism.

For those accustomed to other TLR cameras like the Rollei or the Yashicamat, the Kodak will take a little getting used to. Once the routines of film advance, shutter cocking and focusing have been practiced a bit, however, the Reflex II is about as fast and easy as any other similar camera. Even with the relatively bright viewing screen, I find I generally like to focus precisely using the flip-up magnifier lens. A cable release can also be helpful when shooting at slow speeds.

My camera came to me in quite good shape for its age, but did require some cleaning of lenses, view screen and shutter. Shutter and lens access is actually somewhat easier than on many other TLR cameras, but it was also a big help to have Rick Oleson's exploded-view drawing in getting things apart and back together again. Another excellent resource for Reflex II restoration is the berndtmn camera repair page on Flickr.

Below are some sample images from the camera: 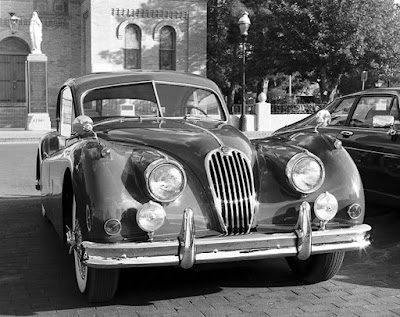 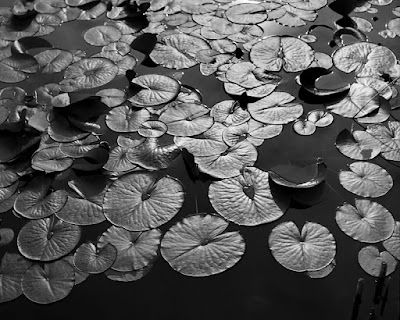 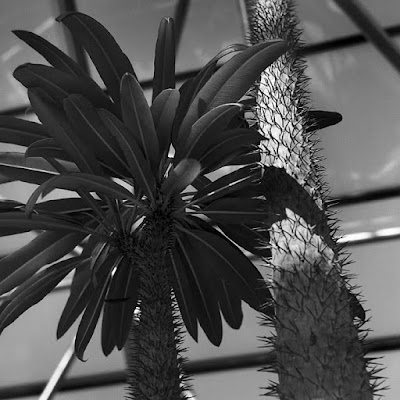 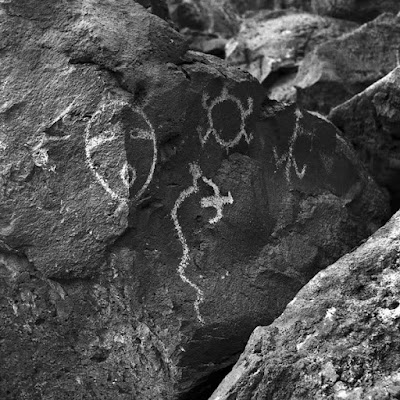 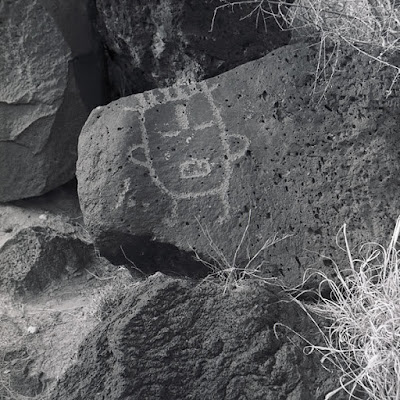 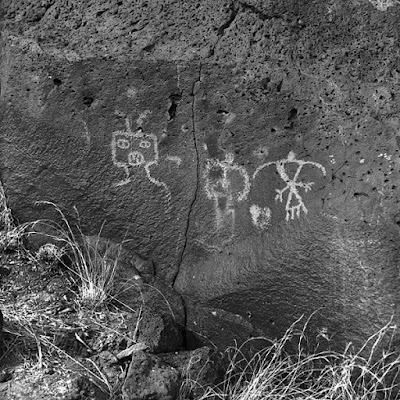 Operating Instructions are at the Butkus site.
Posted by Mike at 12:38 PM No comments:

A few more words are in order about my newly acquired Leica copy from the Former Soviet Union (FSU). I ran a roll of Kodak Gold 200 through it recently in the course of an early morning walk around Albuquerque. I thought the results were quite nice from the Tessar-style lens, so I put some sample color shots together with the previously shown b&w images into a new page on the FED-1g in the vintage cameras section of my web site.

I've limited my comments on the camera to a brief description of my own experience. There are millions of words floating around on the original Leitz design by Oskar Barnack. The German original achieved a large cult following long ago which has driven the price of Leicas beyond the reach of many who would productively use them. Luckily, the FSU Leica copies are still an affordable alternative for those who want to explore the camera design that changed the way the world sees itself.

Even a lot of the Leica cultists have come around to the idea that the FSU Leica Thread Mount lenses are a nice alternative to getting quality results from the old cameras using the 39mm screw-in lenses. In the past six or eight years, a lot of Americans have also discovered that many of the FSU cameras are sturdy and reliable performers which cede little ground to the Leitz originals for those still interested in shooting film.
Posted by Mike at 1:27 PM No comments:

I took a walk around Old Town this morning with my new FED 1g, a Leica-copy built in a Soviet factory in 1954. I'll have more to say about it later when I've learned more about it.

My walk included stops at the Art Museum sculpture garden, the Plaza, and the National Atomic Museum. The pictures from the FED 1g are in a brief slide show.
Posted by Mike at 6:43 PM No comments:

We had a great day learning about cougars at the Ladder Ranch. Our thanks go to Travis Perry and Harley Shaw for their excellent presentations and guidance, and also to the hard-working staffs of the NM Museum of Natural History and the Ladder Ranch.

View the photos from the day.

Visit the cougar project's blog.
Posted by Mike at 8:50 AM No comments: 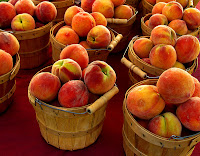 The Saturday Market at 8th and Central