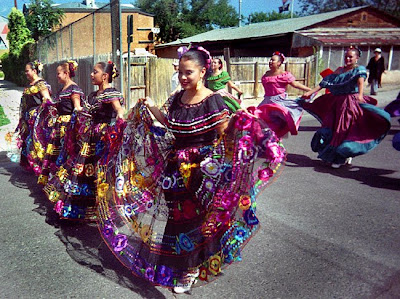 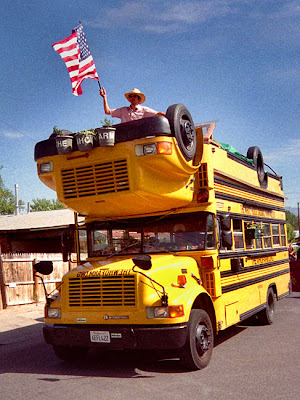 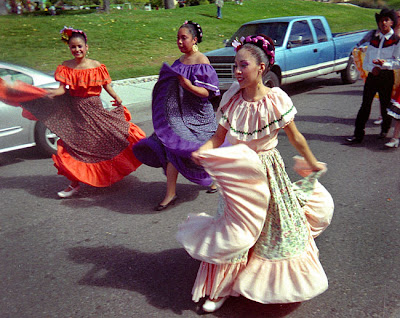 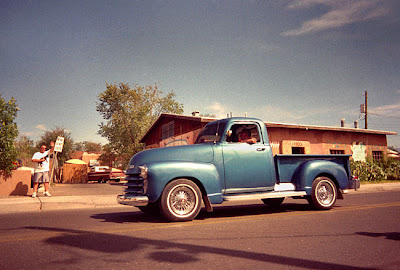 Two cats and a close relative 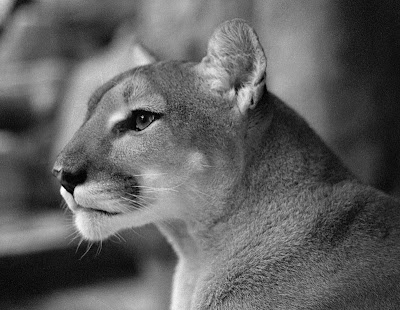 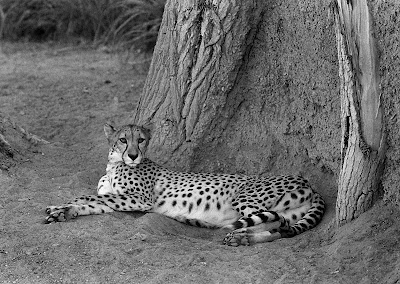 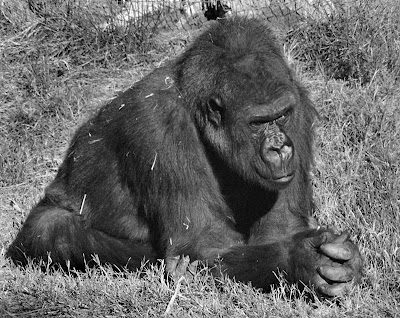 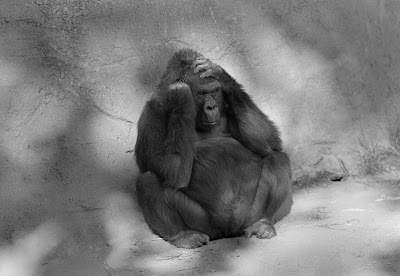 Pentax Spotmatic
Posted by Mike at 9:22 PM No comments: 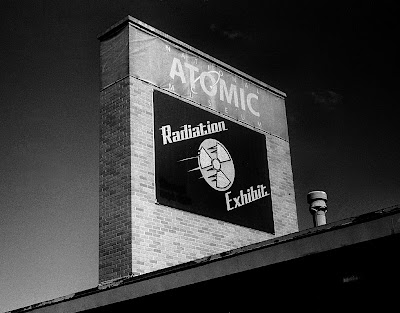 The National Atomic Museum in Albuquerque is getting ready to move to a new location away from its current facility in the Old Town District. The expanded facility will allow the display of several WWII-era aircraft as well as other new features. The exhibits in place now are pretty well mounted and tell their story well, with the exception of the parts dealing with the dropping of the bombs on Hiroshima and Nagasaki. The story is ok as far as it goes, focusing on the point of view of most Americans at the time about the rationale of the bombing and its outcome. Where it comes up short is in depicting anything near to what the reality was on the ground in Japan. There are a few statistics on deaths, a photo of an incinerated tricycle, and another of a bunch of smiling Japanese children in a memorial park. It is an inadequate portrayal of what happened.

I took the picture of the sign on the museum roof with a '1950s Soviet camera, a FED 1g that is a copy of the 1930s German Leica. I still need to do a little work on the shutter, but the camera and the Elmar-copy collapsible lens show great promise. As usual, the cats were happy to serve as test shot models and to help me finish off the roll. 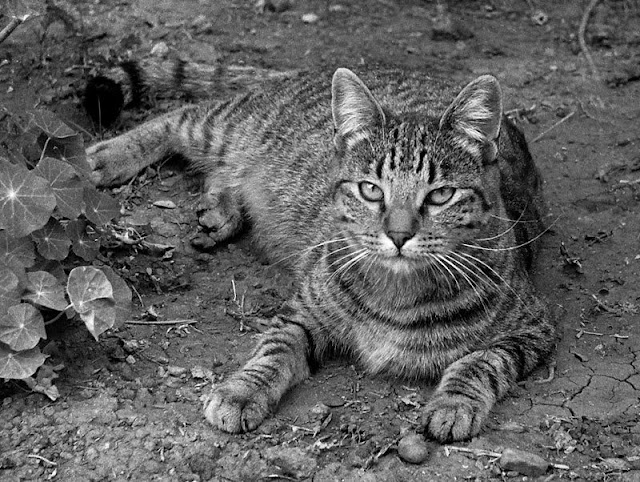 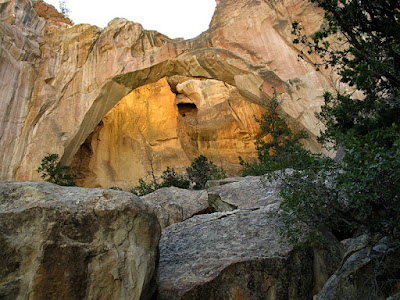 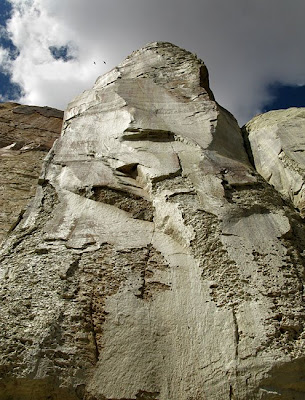 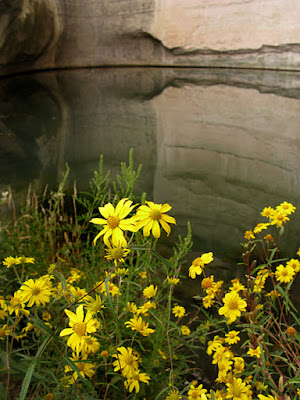 The Writing on the Wall

On the east side of El Malpaís I clambered up over the boulders for a close-up view of the giant rock arch known as La Ventana.

The visit to the spectacular El Morro site and its Inscription Wall provided some new rock art pictures and got me thinking about the question of why people write on walls. That is something that will be endlessly debated because it concerns what happens inside peoples' heads. What one can easily see at El Morro, however, is how culture shapes expression in the form of rock art, and later graffiti. Over the past few centuries European-inspired messages inscribed in the El Morro sandstone all had one basic message: "I was here". The earliest European visitors, the Spanish conquistadors, elaborated on that by adding "...for God and the Empire". There was some of that in the messages left by the early American explorers and settlers too, but later messages would be merely personal and individualistic. In the earlier rock art left by the indigenous peoples, there is no apparent "I", but only an implied "We" and a reference to the relationship of the people to the earth and the gods of the earth.

It is also interesting to note the changes in the rock art over time of both the indigenous people and the invading Europeans. Themes and techniques of the native people changed very slowly and showed great sophistication in execution. Up to about one hundred years ago, the messages left by European visitors were also characterized by considerable artistry and attention to craftsmanship. The earliest Spanish inscriptions at El Morro are done in a very refined calligraphic style. The brief messages left by Americans around the time of the Civil War show an awareness of typographic styles from that time and are executed with great care. Later visitors, starting around the beginning of the 20th Center leaving the "I was here" message clearly were barely literate, and that trend continues into the present time at such remote sites.
Posted by Mike at 10:42 AM 3 comments: 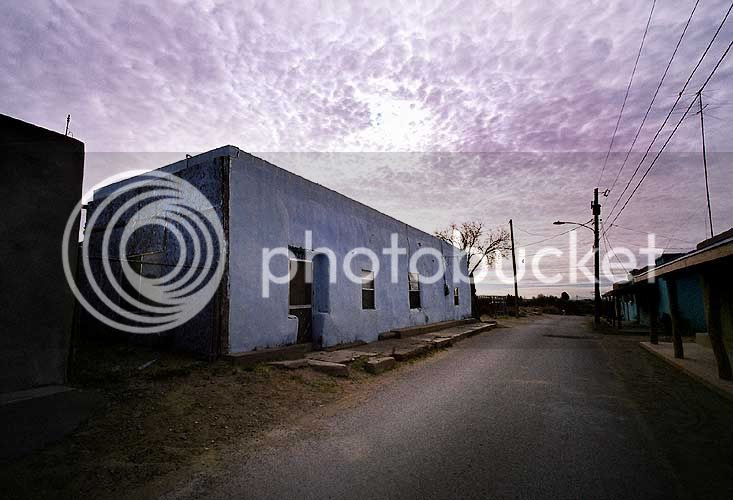 The Village of Doña Ana

I've added a few photos and words to my site's page about this little town a few miles north of Las Cruces, New Mexico. One of the reasons I like living in New Mexico is that one can still find these small traditional communities. Places like La Mesilla, Santa Fe, Taos and Albuquerque's Old Town have echoes of the old traditions, but mostly they are recently constructed fictions designed to fit the fantasies of tourists and help relieve them of their dollars.
The change to the Doña Ana page is also part of an effort to make the web site easier to look at and navigate. I'm trying to put more of my recent photo work up front, and in some cases to provide more of my personal perspective on what the photos mean.
The first six photos of Doña Ana were made with a borrowed Bessa-L and an ultra-wide Voigtländer lens. The last three pictures are from an old Bessamatic slr with the 35mm Skoparex.
Posted by Mike at 10:14 AM 3 comments:

I saw a posting at photonet about an exhibit of the Schultes photographs at the Smithsonian which will run until November 2nd. I briefly discussed this subject in a previous posting after finding the book, The Lost Amazon. The fine picture above of the apprentice shaman is more representative of the quality of the photography in the book and the exhibit than the one I showed. The Smithsonian site also has a nice picture of Schultes with his Rollei. 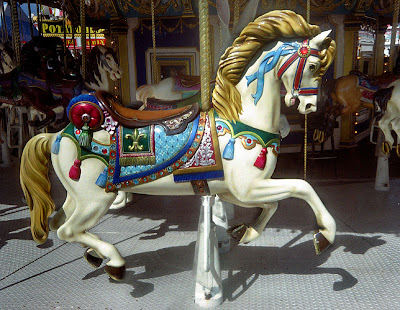 Around 1950 my parents rented a place at Redondo Beach, south of Seattle. It was really just a little beach-front summer cottage with a fireplace and a wood stove for heat. I could walk across the road to play on the beach when the tide was out. When there were storms, the waves crashed against the wooden bulkheads and sent salt spray into our front yard. On the hills behind the house was a damp, dark forest of firs and alders, and the soggy ravines were full of skunk cabbage, devil's club and thick patches of nettles. Down the road a bit a small, noisy creek ran through a park and into the Sound; huge silvery salmon came up it to spawn, and you could easily catch them by hand. A half mile up the road the other way was a dock and an arcade which ate my nickles and quarters in shooting galleries and pinball machines. There was a merry-go-round beside the arcade with the usual collection of wooden horses and fanciful riding animals; I don't recall seeing it running, and I probably would have been too self-conscious to ride it anyway at the advanced age of ten. Sometimes on weekday evenings, though, when no one was around I would slip under the canvas cover, mount the biggest of the horses and take long rides into the night.

The photo was taken at the State Fair Grounds in Albuquerque with my FED-3 and the Jupiter-12 lens.
Posted by Mike at 9:47 AM No comments: 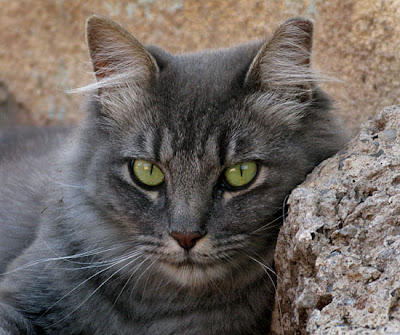 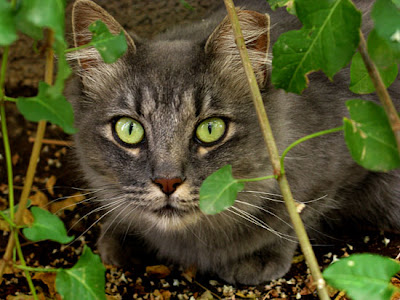 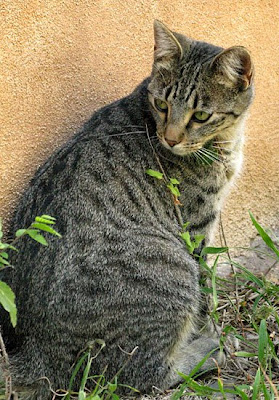 The Outside Cats
Posted by Mike at 2:43 PM No comments: