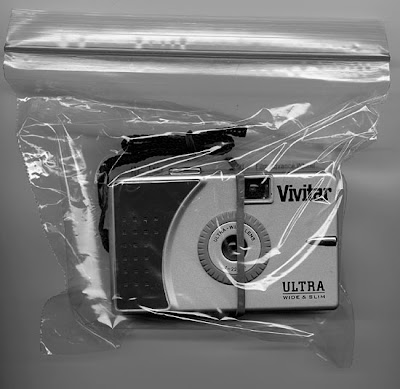 When people talk about the topics of "film vs digital" or the ever popular "death of film", due recognition is seldom given to the toy cameras and their users around the world. The Holga may still be the champ in the toy category, but the Vivitar Ultra Wide & Slim is breathing down its neck.

Another interesting aspect of these simple cameras is the price they are presently bringing. This is due in part to the fact that production of the Vivitar UW&S was discontinued about the time the camera got really popular. The prices shot through the roof, and haven't really abated even though the VUWS has been resurrected under a couple other names.

I paid $10 for my first VUWS and thought that a bit high. The next one, I found at a thrift store for 99 cents. Meanwhile, I've seen the camera selling as high as $50 on ebay, and routinely at the $20-$40 level. My guess would be that the east Asian factories churning out these cameras are doing so for a couple bucks each, at most.

Now, for my dilemma. I just picked up another Vivitar Ultra Wide & Slim in unused condition for 99 cents. The wrist strap is still neatly folded and held in place by a rubber band. There is also a folded instruction sheet entitled, "35 mm Outdoor Camera". I'm not going to sell it for the outrageous price it would probably bring, but I'd like to see someone get it that would put it to good use. Suggestions will be welcomed.

Hi Mike,
I will put your Vivitar camera to good use and dedicate the first roll to you and your blog.

I'll look forward to seeing what you do with it. Send me an address and I'll get it in the mail.

I didn't get the info sheet. Ah well.

Simple cameras have gained a lot of utility from the latitude of modern films, so they can be shot over quite a range of light conditions. Still, it is nice to have a couple, which will take you from low light to bright sun. So, everyone needs a couple VUWS, but not for $30-$50 each, I think.

I suppose the price gouging will pass as production catches up with demand, but it might speed things up a bit if everyone would hold off buying for a couple weeks.

Norman Montifar made some great shots with the camera at Coney Island. Visit his blog to see them.

Thanks, Mike.
The camera is fun to use. It's already becoming one of my favorites. I'm surprised how sharp the lens is for a very simple camera. I like the 22mm wide angle view very much. I just have to be careful in holding it to avoid including my fingers in the shot.