My FED 3 is bigger and heavier than most of my otheer Soviet cameras; it's about the same in those regards as the Kiev IIa.  While the FED 3 can't be slipped into a pocket like the earlier Barnack-style FEDs and Zorkis, it does have a number of advanced features which makes it an attractive shooter. 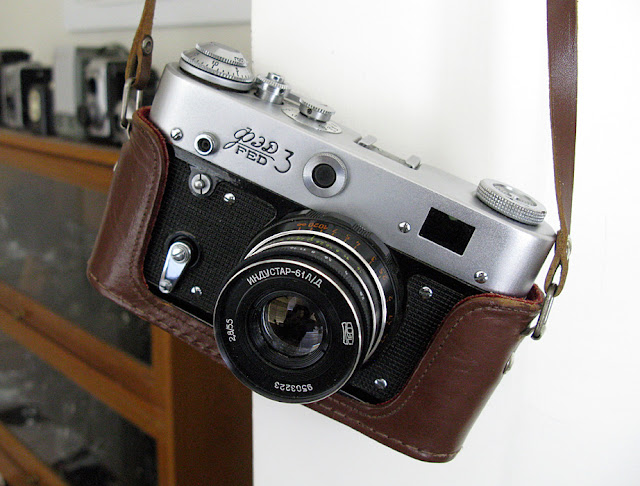 The feature that most immediately grabs the attention of the Soviet camera enthusiast will be the ease of loading the FED 3 with a back that removes to allow cassette insertion with no film leader cutting or fussy threading of the film as in the Barnack-style cameras.  There is also a built-in take-up reel which allows easy attachment of the film leader, and it doesn't fall out on the floor when you open the camera as is the case with the Kiev IIa.
My FED 3 looks almost new.  The fast-working lever advance snaps smartly back when released.  The relatively quiet shutter works well at all speeds.  The combined viewfinder/rangefinder window is brighter than most of my other old rf cameras.  The weak spot is the focal plane shutter with its cloth curtains, which seem to develop pin holes even more readily than most of the other Soviet film cameras.  A liberal application of black fabric paint will often remedy the situation, but it is prudent to check thoroughly for pinholes prior to any use of the camera.

The interesting light of a Fall morning got me out on the street early with the FED 3 loaded with a roll of Kentmere 100.  I managed to finish off the roll on a zigzagging walk to the First Street Rail Runner station.  Back home, I processed the film with semi-stand development in HC-110.  I was not very impressed with the performance of the Industar 61 lens; it seemed no better to me than any of my other normal Sovent lenses, but the camera performed perfectly so I'll likely get out again soon with it and one of my other lenses. 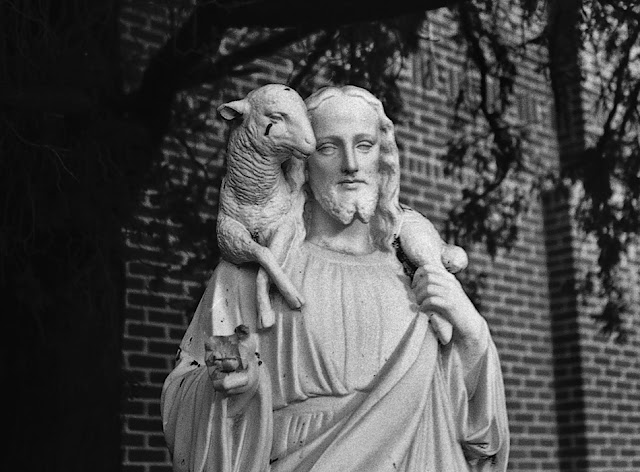 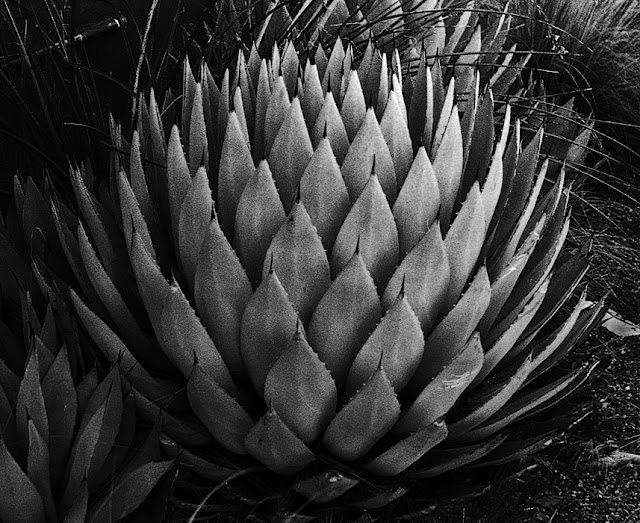 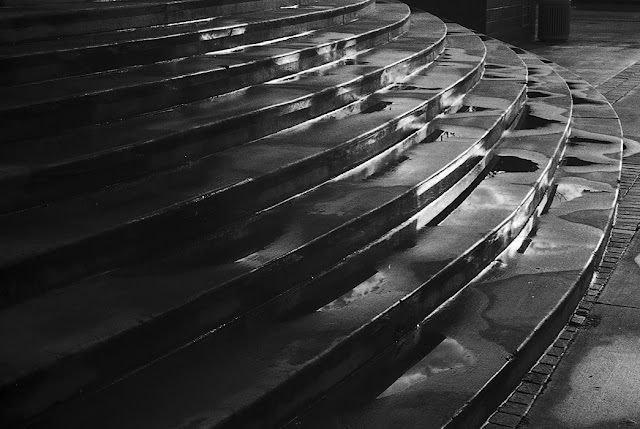 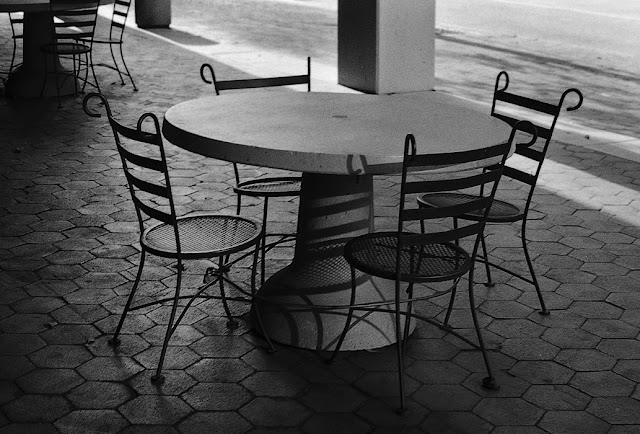 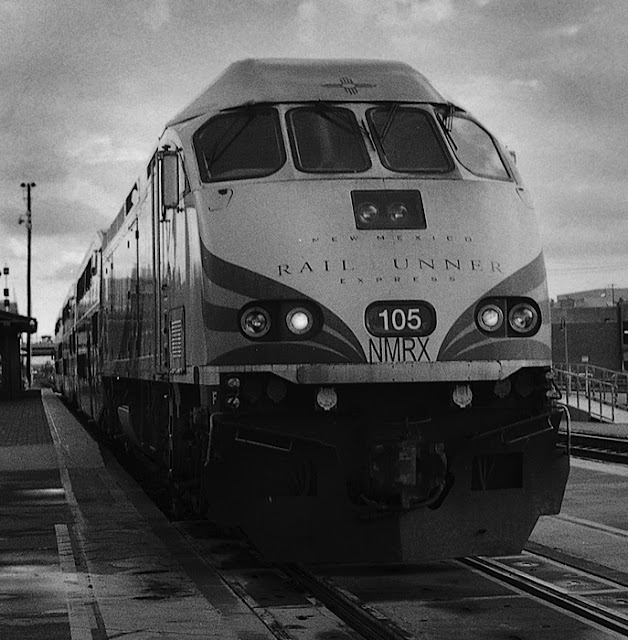 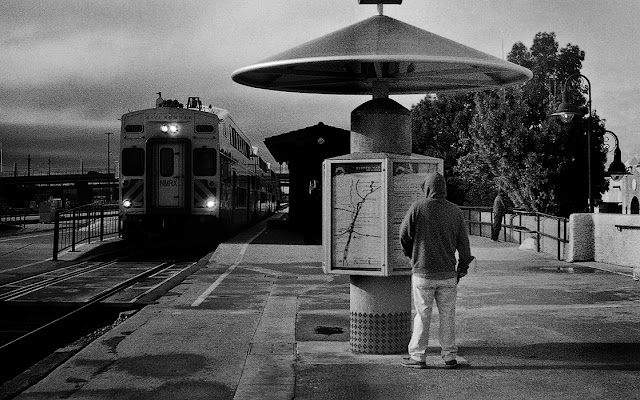 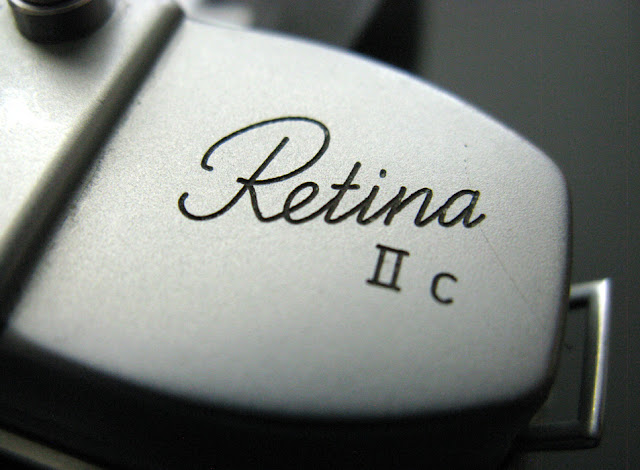 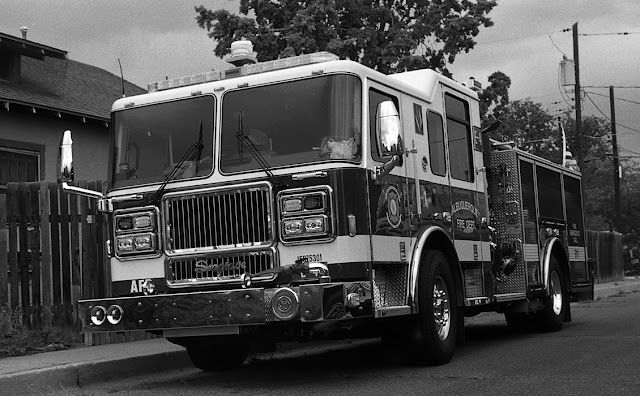 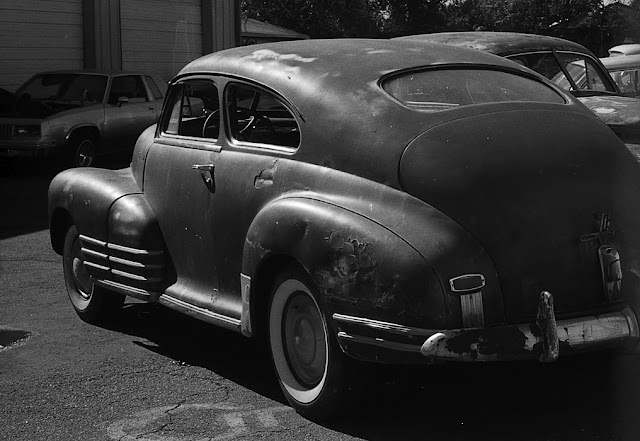 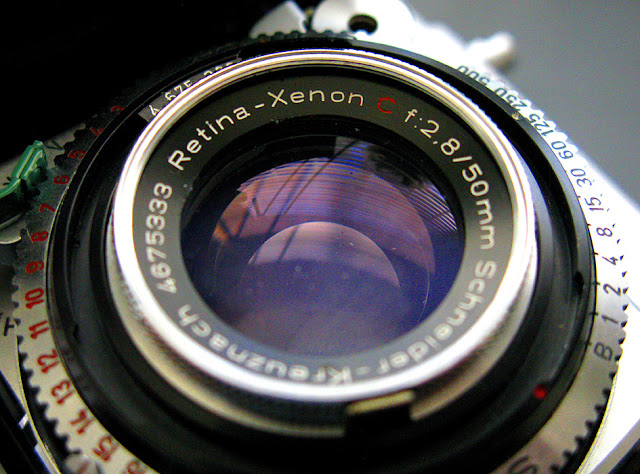 A work in progress.

Acros in the Foth Derby produced only a couple images at the end of the roll I thought to be of acceptable quality. Most of the others were kind of fuzzy and low contrast, and four in the middle featured a broad, blank stripe. I haven't fully sorted out the issues, but I suspect I did a poor job of rolling up the film in the backing paper. I think the film buckled and interfered with the travel of the focal plane shutter curtains. 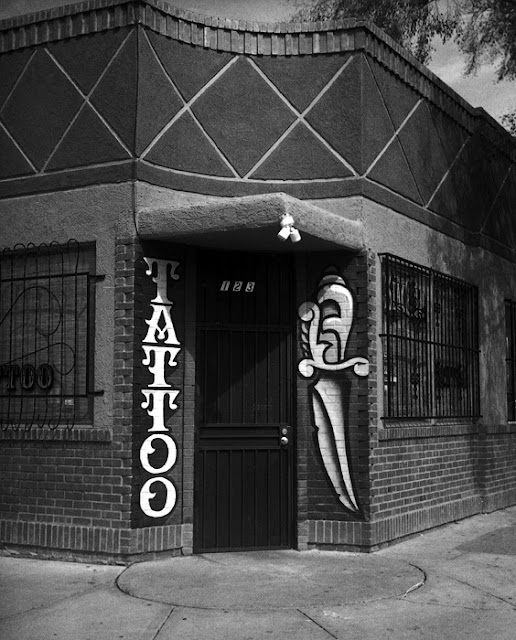 Albuquerque and New Mexico are still struggling to get beyond of the 2008 financial collapse.  The Intel plant which gave the local economy a boost in the beginning of the century is down to a skeleton crew.  The city's main industry at this point seems to be tattoo parlours. 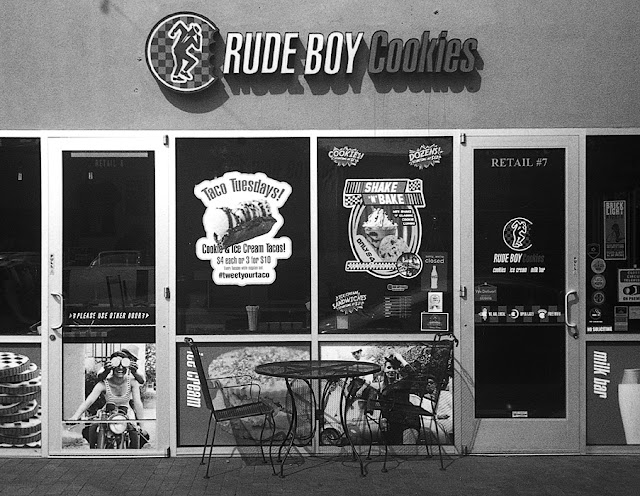 Rude Boy offers a varied menu.  I'm going to take a pass on Tuesdays, which appear to feature a dead cockroach.  The coffee shops and restaurants around UNM which cater to the local student crowd seem to be surviving the disruption of the rapid transit construction on Central Ave., but many of the other businesses are on shaky ground.
Posted by Mike at 4:09 AM 6 comments: 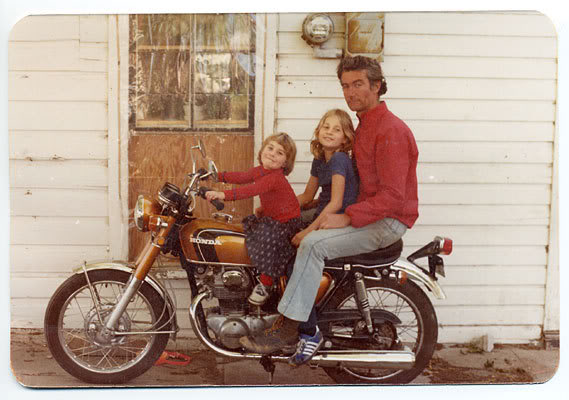 Few days go by without some major data destruction being reported in the press.  One such exploit that has not gained much notice was recently perpetrated by the photo sharing site, Photobucket.  With no prior warning to long-time users of the service, the company suddenly invalidated off-site links to any images stored on Photobucket.  Overnight, web links to thousands -- perhaps millions -- of images were broken.  The images which had been linked to on forums, web sites and blogs were all replaced with a notice, "Please update your account to enable 3rd party hosting".  Visiting the link at the bottom of the notice reveals that the cost of enabling 3rd party hosting will be $399.99.

Simultaneously with the link breakage, Photobucket also disabled users' ability to download full album collections, hindering recovery of images from the site.  Images can still be downloaded individually, but it is a laborious process and downloading linked images requires additional steps which are not immediately apparent.  It is highly likely that a very small percentage of the users affected will submit to this extortionary gambit by the company.  The inevitable outcome will be the permanent erasure from the web of massive amounts of visual data.

Other companies have closed their doors on the web and data losses have often been the result.  What stands out in the case of Photobucket is the deliberate and highly organized manner in which the company attacked the integrity of the web to shore up the bottom line of a failing company.  The self-promotional material on the site still makes big claims about being a premier destination for photo sharing, but the reality is that the company has been a poor choice for such services for a decade.  It has probably remained viable only because of the extraordinary gains in efficiency and economy produced by general technological advances in the same period.

I started using Photobucket in 2006 around the time that digital photography and the sharing of imagery on line was really taking off.  The company at that time, like many others, was offering free on line photo storage and image linking.  That was  an attractive option for bringing digital images into text-based forum sites that did not usually have the capacity for storing and handling large quantities of data.  The business model which made the process viable was on line advertising.  People clicked on ads embedded in the web sites and a trickle of income was generated.

By the time I moved to Albuquerque in 2008 the links to photos stored on Photobucket were performing so poorly that a decision to stop storing photos there was a no-brainer.  Google's Blogger site had made image storage available to bloggers and there were other free photo sharing sites like Flickr that were bigger and faster than Photobucket.  So, I did move on, but a lot of image links from my previous two years of blogging remained attached to Photobucket.

Since Photobucket cut links to my images I have gone through my albums there to download some of the photos that I particularly valued and stored them in a folder on my own hard drive.  I have subsequently uploaded a few of those images to my blog to repair broken links.  However, I likely won't find the time or energy to repair all the damage to my first two years of blogging.
--------------------
Update 9/13/17:
I went to the Photobucket site today to retrieve an image file to repair a broken link.  The site is littered with malware including pop-ups that will take control of your browser to attempt to extort money from visitors to the site.  Not worth the risk in my opinion.
Posted by Mike at 9:32 AM 4 comments: 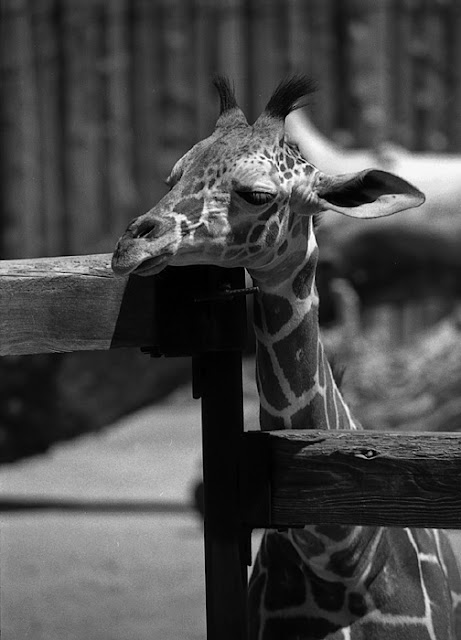 I have used Fuji Acros film mostly with my medium format cameras with Rodinal for development.  That has been a favorite combination for a long time. The film's fine grain and tonal qualities always bring out the best of whatever equipment I have used.  I chose recently to try out the film with a good 35mm slr which facilitates exploring selective focus.  I also decided to try developing in HC-110, dilution B.
I thought the results were pretty good; it is a little difficult to compare with previous medium format results.  I decided that I should probably have given the film another minute in the developer over the 5.5 minutes that The Massive Dev Chart recommends.  I'm going to try that, but I'll probably go back to Rodinal 1:50 for the next roll to provide an opportunity for comparison in small format. 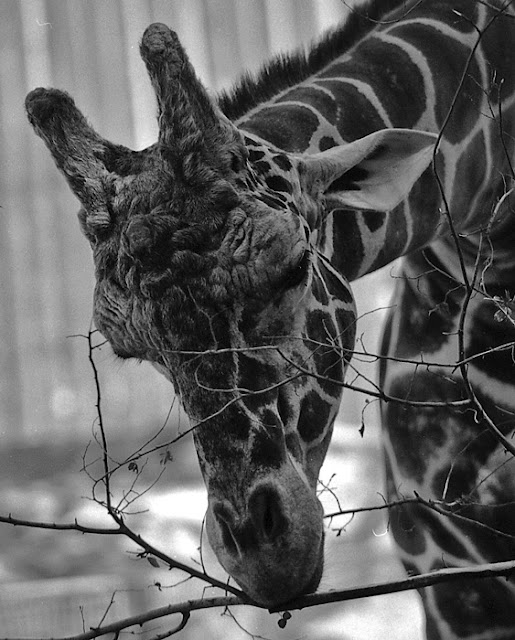 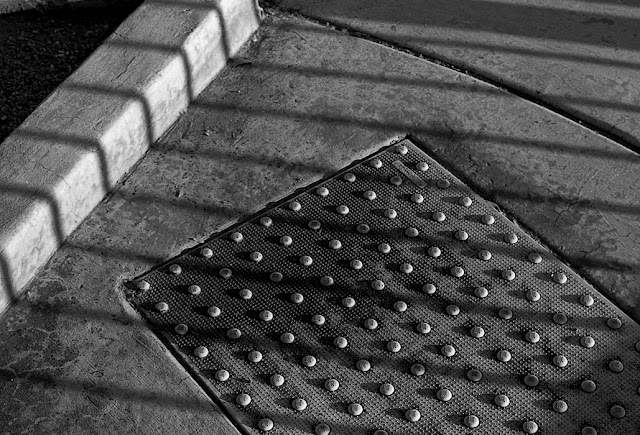 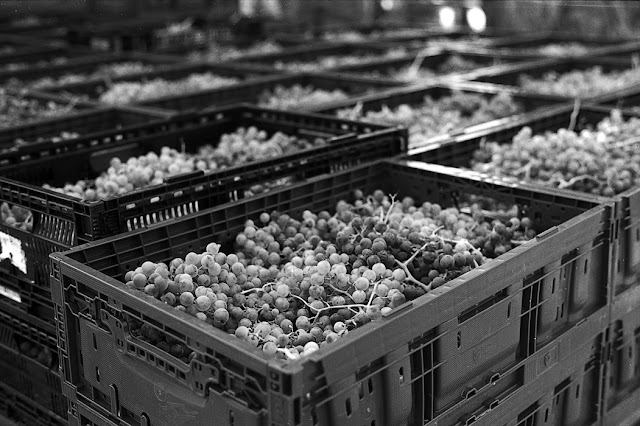 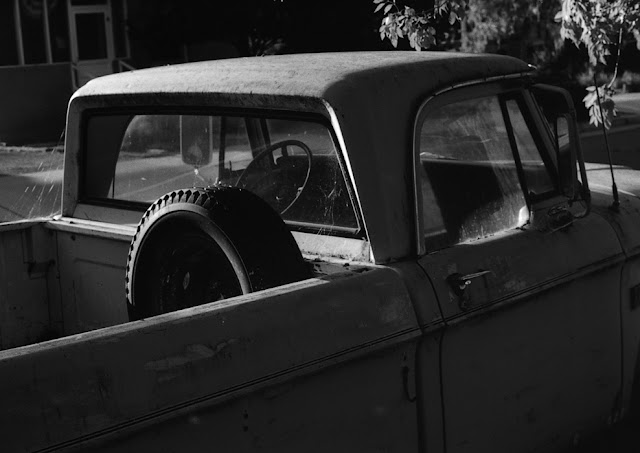 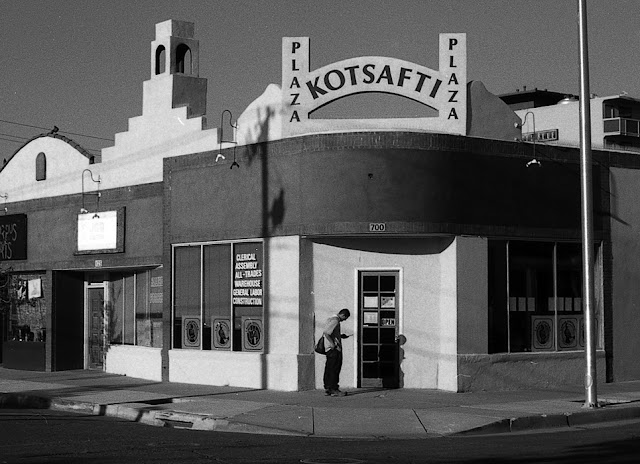 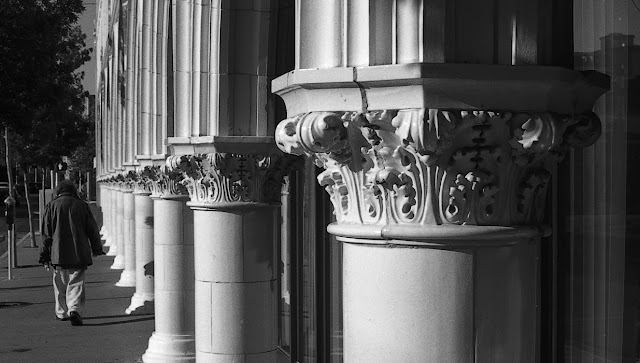 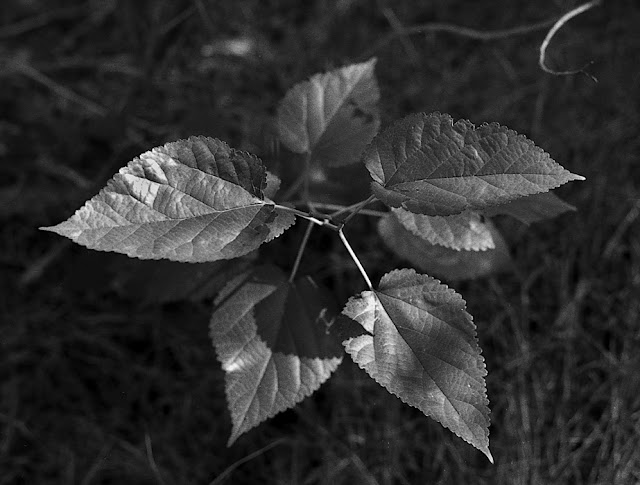