I'm taking a break from blogging. 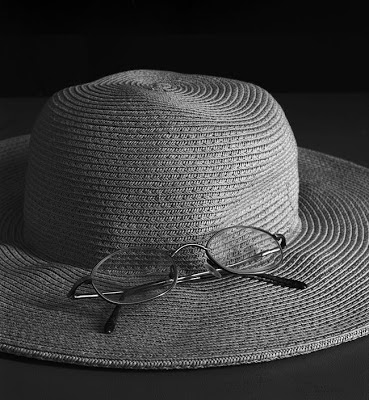 Patent Etui in the Bosque 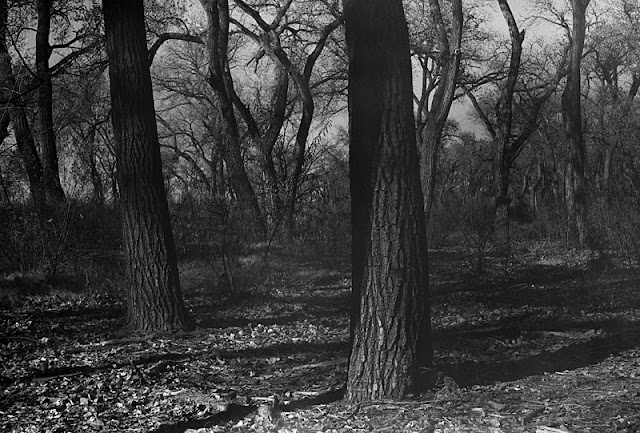 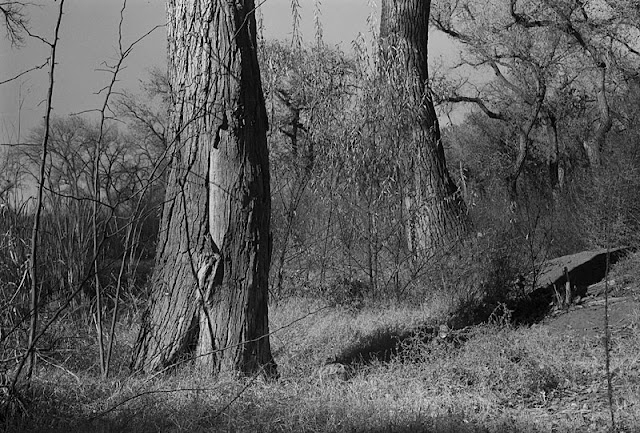 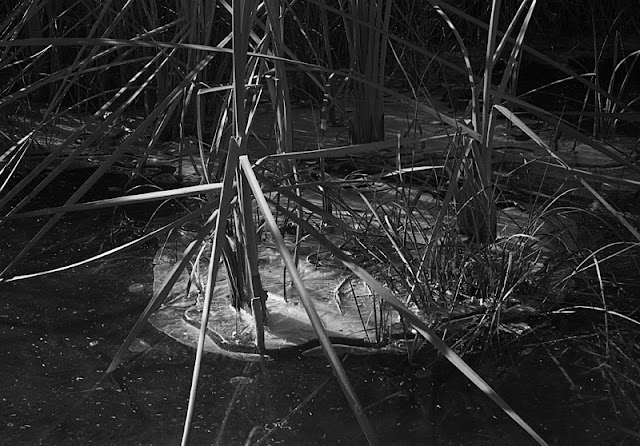 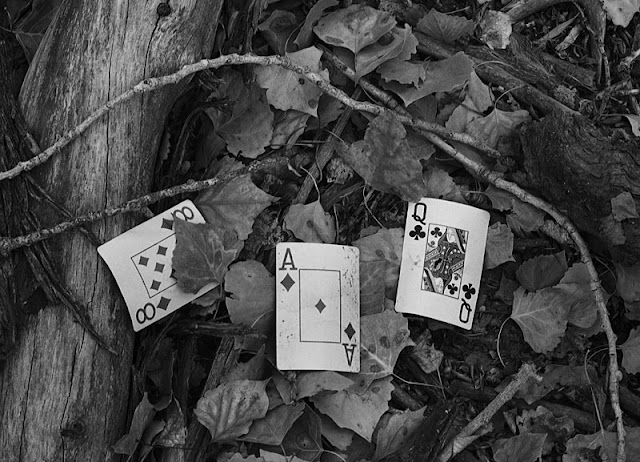 The shutter seemed sluggish in my Patent Etui so I screwed out the front lens element and removed the shutter face plate.  I brushed a little Ronsonol on the shutter gears and gently scrubbed the shutter blades.  That all made the shutter snappier, though the one second setting is still slow.  I'm happy with that result.  Removing the shutter completely and soaking it overnight might get the slowest speeds closer to the original specs, but I'm reluctant to risk pushing my repair efforts beyond a point of diminishing returns.
Posted by Mike at 6:40 PM No comments:

There are still a couple real photography stores left in Albuquerque that have film, as well as collections of old cameras and accessories.  I went to the Camera and Darkroom store at Menual and Washington recently looking for a 27mm lens cap for my Mercury II. 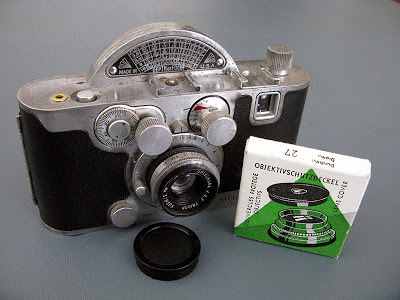 I found a cap that is a perfect fit for the Tricor lens.  I was also pleased to have the box the cap came in which has some nice graphics on it.  The depiction of the lens and cap clearly date the item to the film era.  There is also an inscription on one of the box ends saying "Made in West Germany" showing that the cap was produced when The Wall was still standing. 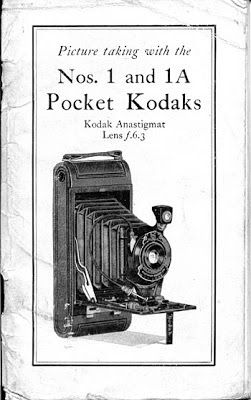 Another recent acquisition that came along with an old camera was a pocket-sized seventy page manual for the Nos. 1 and 1A Pocket Kodaks.  It is always a plus to have such a manual as not all features of the old machines are intuitive in their use.  The illustrations, typography and graphic style also provide revealing glimpses into the times in which the cameras were originally produced and used. 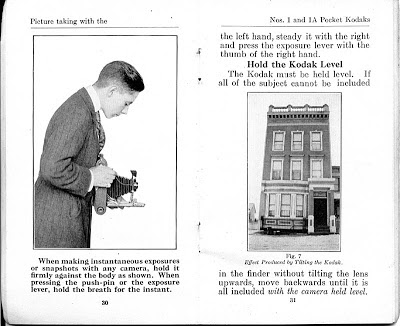 Although I always enjoy seeing  the ephemera that trails along with the old cameras, I never know quite what to do with the stuff.  I'm reluctant to just throw it out, so I squirrel it away in a box and it is just dumb luck if I am able to find it again sometime in the future.

For those ephemera that seem to have some special informational value I try to scan them so that I at least have an accessible trail to follow, and I share some of that in my vintage cameras web site.  In the case of the recently-acquired manual, I copied several pages which had a particularly good description of the Kodak Autographic System and put them in the ephemera section of my site.
Posted by Mike at 3:51 PM No comments:

The Patent Etui was the first product from Kamera Werkstatten and was marketed under the name, Kawee, in the U.S. -- a play on the German pronunciation of the company's KW initials.  The claims for the camera were a bit over-blown in the ads, though it was quite a revolutionary development at the time.

Getting the Patent Etui to the point of making some pictures has been a very nice experience for me.  I wanted this camera for a long time, and was very happy recently to get a good example as well as the Rollex film back for it.  It has also been a nice excuse to look at some of the historical aspects surrounding the plate film cameras.

It seems extraordinary that such a lot of talent and resources in camera manufacturing came back together in Dresden immediately on the heels of a war that was so devastating for Germany.  The concentration of resources encouraged modular designs that promoted quality while maintaining reasonable price points.  All the different plate camera producers made use of similar design features, and key components including shutters, lenses and viewfinders were often supplied as complete assemblies from Zeiss and the other major players in the industry.
Posted by Mike at 11:02 AM 1 comment:

The natives watched us warily across this forest clearing. 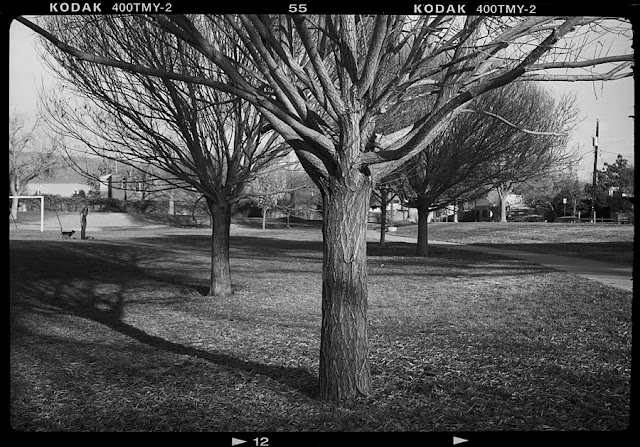 A pair of rhinos and no place to hide.  Luckily, they chose not to charge. 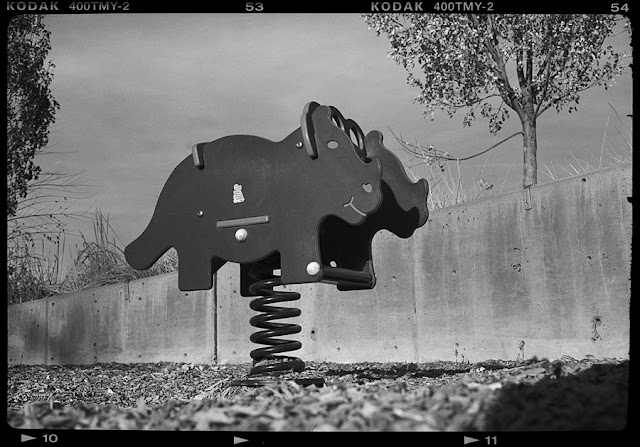 I haven't found any good light seal material to block out the leaks in the Rollex back for the Patent Etui.  As a stop-gap I put a strip of black tape around the seam where the two halves of the outer case come together.  Eight shots, no leaks.
Posted by Mike at 7:16 AM 1 comment:

The Cafe Lush at 7th St. and Tijeras is a classy place for lunch or breakfast with reasonable prices.  There's one friendly, competent waitress and a good cook.  I had two eggs up, hash browns, toast and coffee for $6.  We ate inside because it was early and a little cool, but by lunch the sidewalk tables are still feasible in early December. 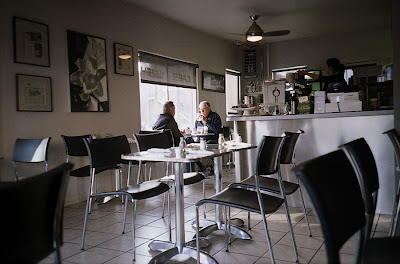 In New York's Lower East Side in the '60s I could get the same meal for a buck, though the decor was not so spiffy. A couple blocks over, a lunch of pig hocks and mashed potatoes could be had for a buck or two.

All this got me thinking about deli food, so I picked up some pastrami, sauerkraut and rye and we made sandwiches for lunch today.
Posted by Mike at 1:00 PM 2 comments:

When I went to the Nuclear Museum to put a test roll through my Patent Etui plate camera I also carried along my Olympus Infinity Stylus loaded with Fuji 200 color.  Besides affording the opportunity to explore the subject with the perspective of a 35mm lens, the little Olympus also provided the chance to experience a large part of the history of compact film cameras from the Twentieth Century. 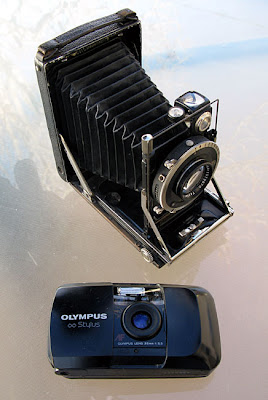 The first model of the Patent Etui emerged from the KW Stuttgart factory about 1920.  The Infinity Stylus made its debut in 1990.  Both cameras were responses to interest in compactness and ease of use, and both were at the leading edge in their respective eras of technology and design.
The Olympus has auto-exposure and auto-focusing and requires nothing of the user beyond composition in the viewfinder and a press of the shutter button.  While the KW camera requires manual setting of focus and exposure settings, the Compur shutter is rugged, accurate and reliable.  The four-element Tessar lens in the folder will still hold its own against modern lenses in terms of resolution, lacking only the anti-reflective coating which came along in the post-war years.   Snapshot-sized prints from the two cameras would be hard to distinguish, though the 6x9 negative from the folder will support vastly greater enlargement than that from any 35mm camera. 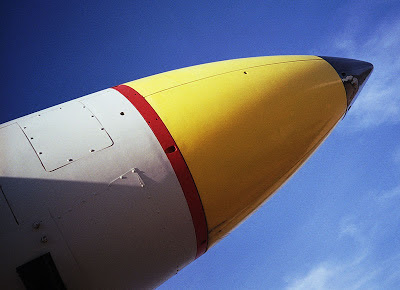 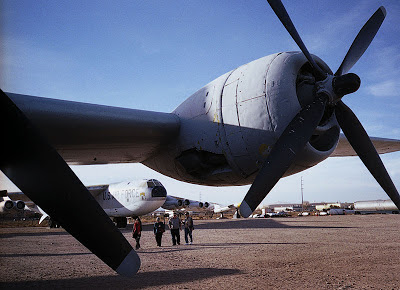 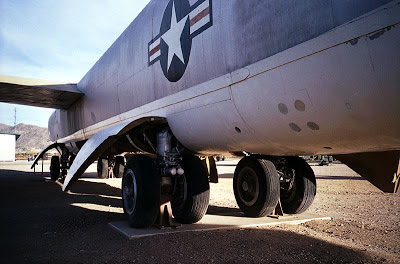 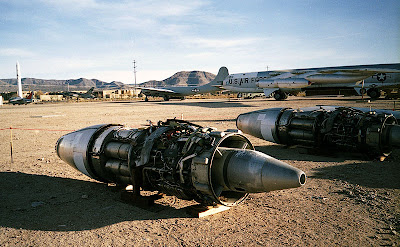 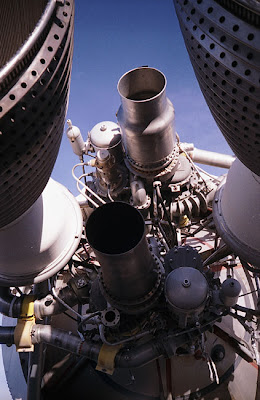 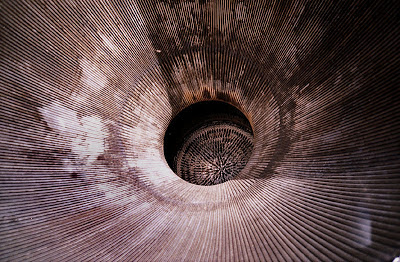 Moving along with the Patent Etui

I took the Patent Etui to the Nuclear Museum after doing a little more work on it. 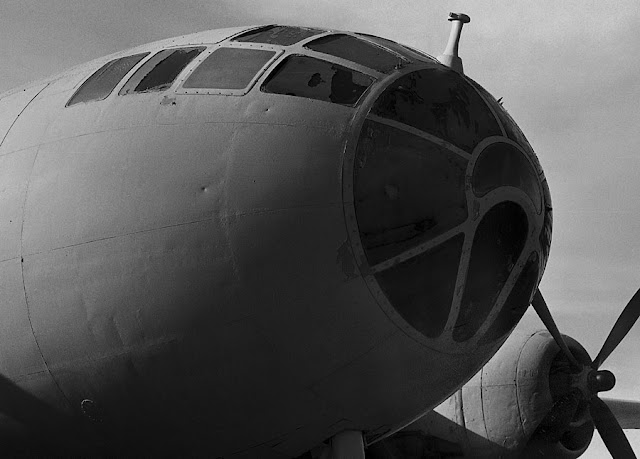 I cleaned the lens again, replaced a missing light seal at the hinge in the film holder and smoothed out the film path a little to avoid film scratches. 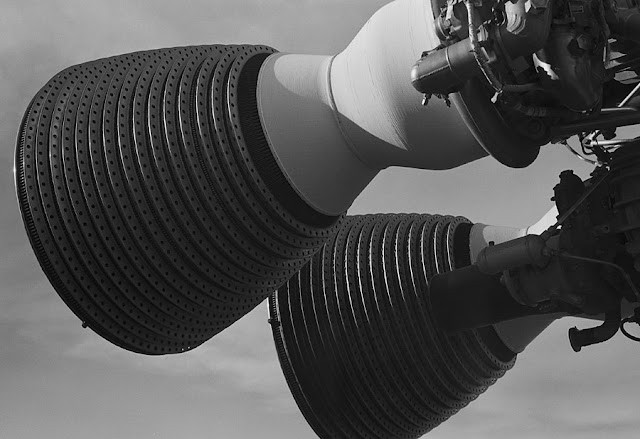 The Tessar lens is really a great performer.  Combined with the 6x9 negative size it is capable of producing some great results.  Below is a crop of the rocket nozzle at 100% enlargement. 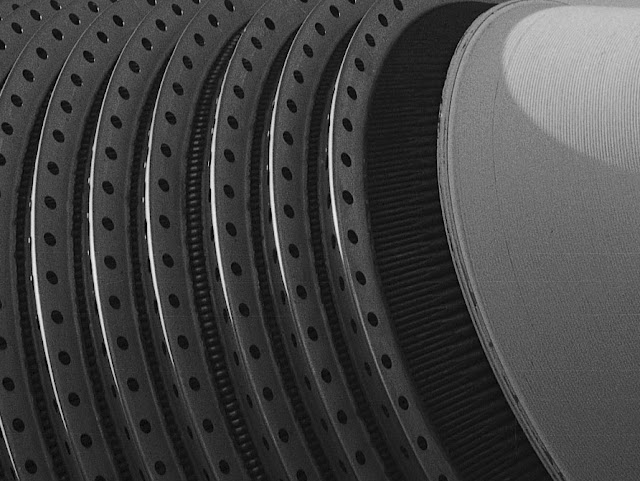 All the shots suffered to varying degrees from a couple remaining light leaks.  I'm pretty sure the bellows is leak-free at this point, but the camera body and the film back still need some work on the light seals. 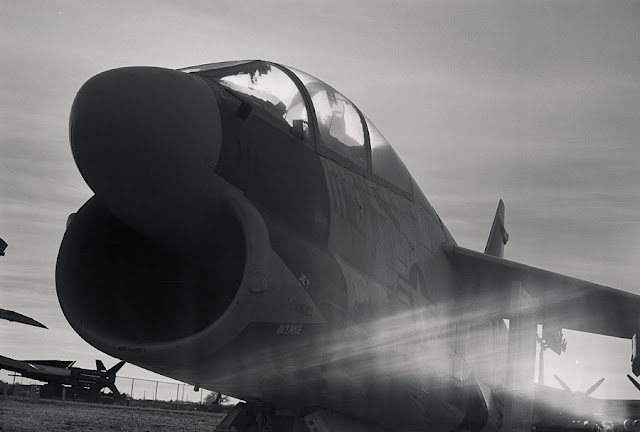 Like the Rada that I use with the Recomar 18, the Rollex film back has a removable internal frame for mounting the roll film and the take-up spool. 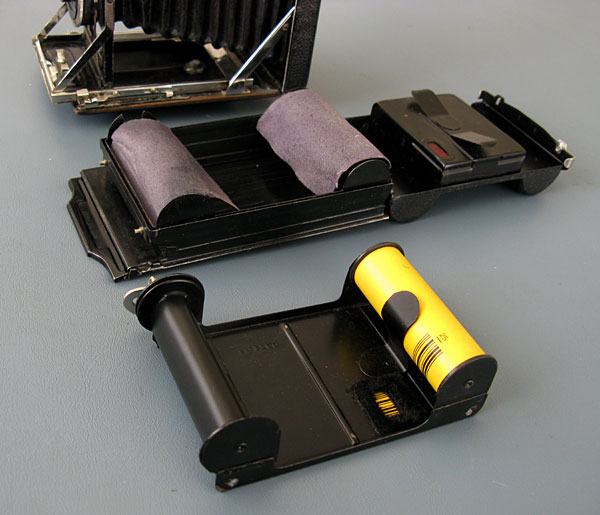 Because of the way the film back is constructed, the film feeds onto the take-up spool against the existing curl of the film.  That means that when you remove the roll from the holder, the film and the paper backing spring outward and unroll.  So, it is a good idea to perform that operation inside your light-tight film changing bag.  Because the Rollex is a bit rougher in its design than the Rada, I think it is going to be a little more difficult to get it leak-proofed.  It is unfortunate that sheet film is no longer available in this size as I think the use of a sheet film holder would be a help in diagnosing problems.
Posted by Mike at 10:07 AM 7 comments: