Web sites and blogs about using old film cameras are getting harder to find as the years roll by.  So, I'm always pleased to stumble on a site featuring classic film cameras that I have not visited before.  As often as not, however, I am disappointed in the contents of the sites.  Quite a few enthusiasts talk endlessly about camera features, providing endless details about the operation of the cameras which put the original manuals to shame.  Very often one plods through all of that only to arrive at the article's end without seeing a single picture made with the camera.  When photos are offered they very often feature light-leak flares or dust spots resembling snow storms.  That would not be particularly objectionable if a second set showed the results of fixing the small problems which underlie such blemishes, but the next article in line is usually one devoted to a different old camera which, unsurprisingly, shows the same performance issues as the previous one.  It seems people who operate in this mode are setting out to prove, perhaps unconsciously, that old cameras can make photographs.  Really?  How many times does that point need to be made?  There is also - especially galling to me - an underlying implication that the pathetic pictures on display are the best the cameras can produce.

So, here are some observations and tips to get better results from old cameras:

None of the big camera manufacturers and few of the small ones made any cameras incapable of making technically superb photographs.  The folding cameras, box cameras and plastic point-and-shoots - even with the simplest lenses and no options for shutter, aperture or focus adjustments - were and remain capable of producing sharp pictures with pleasing tonalities.  To be sure, there are real differences in features and capabilities among different types and formats, but that only means that the photographer needs to work with the camera long enough to learn to operate within the parameters of any given camera. Claims which denigrate quality control in the factories of Kodak, Ansco or Argus can be safely ignored as they are always without evidence or documentation. 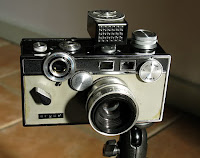 Old mechanical shutters, even in very high quality cameras will become sluggish with a build up of dust and congealed lubricants.  Often, a couple drops of a solvent such as Ronsonal is enough to get them working more smoothly.  What if you try that and the one-second or half-second speeds still do not work perfectly?  Don't let perfection become the enemy of good enough. 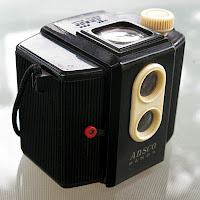 Box cameras often have simple shutters which remain reliably consistent for years, but a speed as low as 1/25 second is common and can easily lead to blurry pictures if the camera is not securely braced at the time of exposure.  The fixed apertures in such cameras are quite small in order to insure sharp focus over a wide range of distances.  However, the focal length of the majority is close to 90mm, so with a camera like the popular Brownie Hawkeye Flash the photographer should not get closer to the subject than eight feet.  There are a few exceptions like my little Ansco Panda which let me get sharp results at six feet.  Simple push-on accessory lenses such as the No.13 for the Hawkeye Flash allow close-up portraits at 3.5 feet. 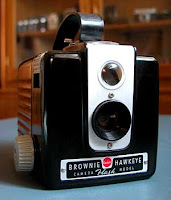 Old folding cameras with accordion-like bellows are very likely to have tiny pinholes that will ruin pictures.  Such pinholes are usually easily repaired with a dab of black fabric paint, but first they must be found.  Take the back off of your folder, point it at a very strong light source like the Sun and wiggle it around to spot the pinholes in the creases and corners of the bellows.  Then, take the camera into your bathroom, turn out the lights and run a small LED flashlight along each fold and crease inside and out to find any remaining holes.  The other common source of light leaks in the old folders and box cameras are the ruby windows in the back which allow viewing of the frame numbers on the film backing.  Keep the ruby windows covered with a bit of black tape except when winding on the film, and do not allow illumination of the window by direct sunlight.  Some modern roll films like Kodak's otherwise marvelous TMAX have very low contrast numerals on the backing paper which render them nearly invisible through ruby windows.  Save those films for use in cameras with automatic frame advances like the Yashica-Mat or the Mamiya C330. 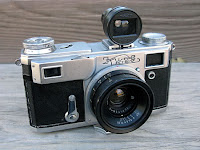 American and German camera makers relied on good-fitting, baffled backs to avoid light leaks from that source.  However, they often needed to add a strip of light seal fabric in the hinge area to keep light from getting into places it should not go.  Worn hinge seals are easily replaced in such cameras.  The Japanese made extraordinarily well-crafted 35mm cameras in the post-war years in which they perversely installed foam light seal strips all around the perimeter of the camera backs which inevitably turns to awful goo in a decade or so.  Luckily, it is not difficult to cut replacement light seal strips from cheap foam sheets which cost only a buck or two at you local big box store.  Another good source of foam-like material for light seals is a thin computer mouse pad; I just bought one from Staples that my mouse is comfortably resting on, but will likely end up in a couple of my old cameras one day. 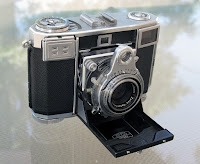 So, get out there and make some pictures with those old film cameras!  And, cultivate the thought that whatever camera you are using, be it ever so humble, is fully capable of making stupendous images.  You will get what you expect.
Posted by Mike at 5:10 AM

I love it when you rant!

This is a really good piece on some of the common ailments and fixes on great classic cameras. Thank you!

I get irked when bloggers review cameras and go on and on about some issue they had with a particular camera and give it a bad review based on that. In many cases, just reading one of the online camera manuals will explain that the problem they are having with their camera is easily remedied by following the directions.

Even though most classic film cameras feel pretty familiar to me by now, I still search out online manuals before I use a new-to-me camera for the first time.

You're right that a lot of negative comments about old cameras are very often based on single encounters with the camera model. The Butkus manuals site is a great resource as he has manuals for nearly everything. The old folders and box cameras don't often need lengthy instructions to go with them, but some of the last generation of film cameras can be pretty intimidating without some written guidance.

I agree with the substance of your rant. But I was initially one of the people you rant against. I'd shoot with some new-to-me old camera, not really knowing what I was doing. And I'd get bad results and say "meh, bleh, this camera sucks."

I learned better, in no small part because of other film-photo bloggers who blogged about the simple repairs they were doing, and about the techniques they used to get the best from their old gear. Here's hoping the current crop of new film-photography bloggers do, too.

I knew a fellow in Las Cruces who was a very capable artist with paint and pencil. He had a big collection of old cameras. He thought they were beautiful objects, and I guess that is ok. However, I always felt the cameras would be happier in the possession of a person who would put them to use. Glad you saw the light, Jim.

But I have found light leaks, especially prevalent in Kodak folders, virtually impossible to fix unless they consist of one or two very small pinholes that can be simply patched with gaffer tape. When the leaks are more extensive I have tried various remedies involving glue, shoe polish, fabric paint and God knows what else. The result is usually a stiff bellows that is impossible to re-fold. I successfully patched a Kodak Bantam Special (beautiful camera), but I can't risk re-folding it lest it spring further leaks.

Frustrated by the difficulty of repairing leaky bellows, I recently grafted a good lens-shutter onto a cheap folder with sound bellows of same focal length. In one case this worked well--front end from Zeiss Ikon Ikonta grafted onto a cheap Adox In another case--front end from Agfa Isolette onto Agfa Speedex--the images are coming out blurred. I wonder if anyone else has tried this.

You are right that some of the later Kodaks have bellows that deteriorate beyond repair. For those better ones with just a few pinholes I have had pretty good luck using Tulip brand ebony fabric paint to put just a small dot over the pinhole and then letting it dry thoroughly. I've also tried the black putty-like material referred to as "liquid plummer tape", but like you found that it just makes a mess of things.

I have replaced the bellows on a couple of my Kodak folders. You can find replacement bellows on ebay, though the type and dimensions are sometimes hard to come by at times.

I did one lens replacement on one of my little Kodak Retina folders. I took a very fine Ektar from a junker and replaced a very cloudy Xenar. That was a tricky repair because you can't test the infinity focus without completely reassembling the camera. It is a big help when you can find good repair instructions on the web. In this case I got what I needed from the very helpful web site and YouTube videos made by the New Zealaner, Chris Sherlock. He was also the reason I was able to replace the prism in my Retina Reflex.

A fine article Mike. I have even read some blog reviews which have a long description of the camera that ends with "I can't wait to put a film through !" - how can you review a camera you haven't actually used?

Right. That does seem similar to praising the great stylistic panache of the Jaguar XK120 without talking about how it actually handles on the road.