Part of the attraction in shooting old film cameras for me is that they provide a portal to understanding the opportunities and challenges of photography in years gone by.  Box cameras, folders and rangefinders can seem awkward in use, but photographers have made outstanding images from all of them.  Of course, there are limits to how much understanding one can derive from just using old technology, but that is a start and there is much help available from historians, biographers and critics. 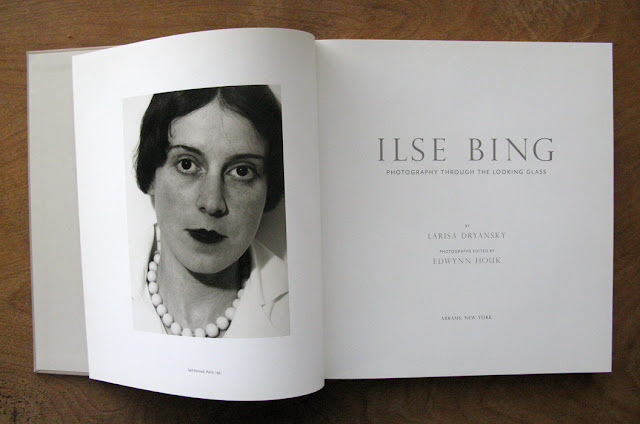 For me, the 1920s and 1930s have always seemed photography's most interesting period because of the era's confluence of technical developments and aesthetic awareness, largely centered in France and Germany.  The best guide to that era I have come across is a book by Larisa Dryansky, Ilse Bing: Photography through the Looking Glass.  The book is a bit rare and rather pricey, so I felt very fortunate to pick up a copy for just ten dollars at a local used book store.

Ilsa Bing's photography career started off in Frankfurt with the childhood gift from her family of a box camera.  She acquired a Voigtlander plate camera in 1928 which she used to document the subject of her art history thesis.  In 1929 Bing bought herself a Leica and stuck with that choice through nearly all of her work.  She used what then was considered a miniature film format to explore the full gamut of photographic possibilities including street photography, portraiture and advertising illustration.  Her photographs appeared in leading magazines of the day in Paris and Frankfurt and her work was exhibited in many fine art galleries in Europe and America.

The nice thing about Dryansky's book is that it not only provides and excellent account of the photographer's life and a critical assessment of Bing's work, but it also shows Bing's innovative photographic efforts in the context of the time.  Paris in the 1930s offered Bing endless photo opportunities, but the city also was a cauldron of experimentation and discovery in every artistic genre.  Many of the photographers who were most highly regarded at the time were women.  Bing's friends and contemporaries inclluded Florence Henri, Germaine Krull, Lisette Model, Gisèle Freund and many others.  Perhaps not surprisingly, much of the innovative work of these pioneers of photographic modernism was driven into at least temporary obscurity by the economic downturn of the 1930s and the calamitous world war.

In spite of her wholehearted embrace of French culture Bing was interned by the French as an enemy alien and,ironically, with the victorious advance of the Germans she faced exposure to the Holocaust.  Bing ultimately escaped to the U.S., but her photographic ambition and career entered a long downturn along with the whole idea of photography as a fine art.  Bing experimented with medium format and color for a time, but she gave up on producing any kind of still photography by 1959.  Fortunately, she lived a long life and saw a renewal of interest in her pre-war work in the 1970s.

I do not believe I have ever come across a book on the history of photography which did not include some technical errors, and Dryansky is no exception.  I only recall one error in this work -- a misstatement of the length of the film strip in a 35mm cartridge.  That kind of error would be easily avoided by just having a competent photographer proofread the text, but no one seems to think of that.  More importantly, there is nearly always a lack of perspective in regard to the photographic process.  Attention is always given to what kinds of cameras were used by a particular photographer, but there is seldom any recognition of the the film technology which made the whole enterprise viable.  Likewise, the abilities of photographers to artfully compose images is given great weight, but the equally important tasks of film processing and printing are nearly always given short shrift.  In Bing's time prints and half-tone reproductions were the only way to view images, so it seems that more attention to that end of the process really ought to get more recognition. 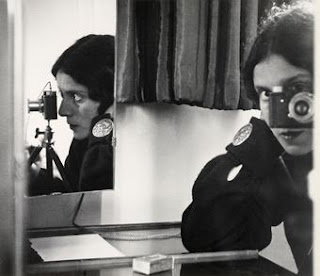 Ilse Bing's "Self Portrait with Leica, Paris 1931" has become the iconic representation of that era, but there are many other examples of her work easily accessible on line, with a particularly good collection at the web site of the International Center of Photography in Tucson.
Posted by Mike at 7:22 AM

This is a book I really think I would enjoy. I am going to have to look for an affordable copy. Thanks for writing about it.