I found this Kodak Duaflex at a garage sale recently.  It has some scrapes and dents, but the lens is clear, the shutter works, and there are no light leaks.  It took me a moment to recognize this camera as I was previously familiar with later models which are a bit larger and have more features.  I thought it would be interesting to compare the Duaflex to the Panda, which was its nearest competitor in the immediate post-war American market. 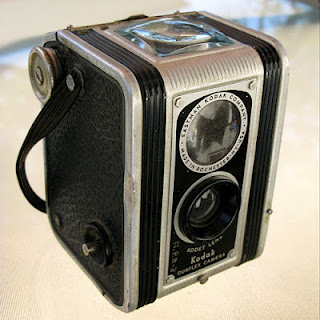 Kodak stuck to what it knew with the Duaflex.  The construction is similar to simple pre-war metal and bakelite designs with the primary innovation being the brilliant reflective viewfinder.  The Kodet meniscus lens has good central sharpness which degrades rapidly toward the image edges.  The flat film plane emphasizes the limitations of the simple lens design.


The Duaflex cost two or three times what was asked for the Ansco Panda.  For that extra expense, you got shutter sync for a flash attachment, "I" and "B" shutter settings, a tripod mounting socket, and the possibility of using the slip-on No.6A Kodak Closeup Attachment.  Like the Panda, and all of Kodak's medium format cameras of the era, the Duaflex required the use of 620 film.


All of the Duaflex models have a rather awkward shutter release plunger.  If you can manage to hold the camera still while releasing the shutter, quite nice results can be obtained. 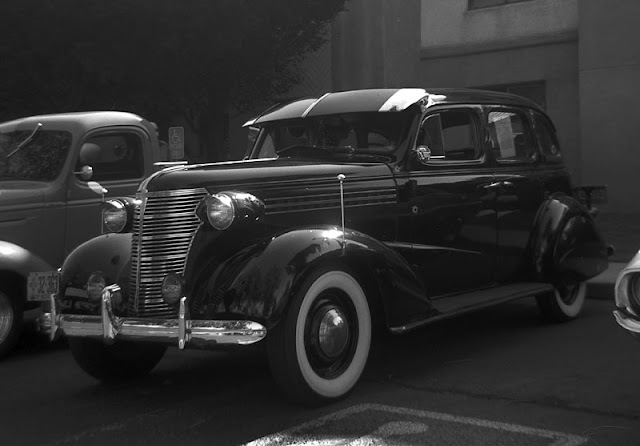 I had a garage-sale Duaflex II as a kid and really enjoyed using it. The shutter button was in an awkward place, but it slid smoothly and was not a source of shake.

Nice shot of the '58 Impala's interior.

You're right that the shutter plunger actually moves pretty smoothly, particularly in comparison to some of the old folder shutters which made the whole camera jump when the shutter was tripped. The issue for me is more with the somewhat unnatural position the hands are forced into. Long fingers are an asset with the Duaflex, and a cable release socket would have been a real plus. Of course, the real culprit with all the simple box cameras of that era is the slow shutter speed of around 1/30 sec. I'm going to try another roll with the camera using its assets including the "B" setting and the tripod socket.

Old cars and old cameras, nothing better with my morning java. That interior shot with the old Fuel and Temperature gauges brought a smile, as I recall they were just a aproximation of reality.

Another camera that I will not get in Germany! :(
Thanks for the description and the fine deductions.

Kodak's UK operation made the Duaflex in London from 1949 to 1955, so there should be some in your neighborhood. Of course, it works the other way too. There's a lot of interesting European models that we seldom see here, and the postal rates don't encourage purchases across the pond.

True, I just have to keep the eyes on the European Alternative!
(Ansco Panda=Adox66 or Bilora Bonita 66)
There are also some things from Kodak, just only with 127 roll film.

Among my "simple" cameras, the Duaflex III that I have is a cut above all the others (although in fairness, it is the model with the Kodar lens, and that makes a big difference to image quality).

I hear what you're saying about the shutter release plunger though - it doesn't inspire confidence in terms of camera shake. The technique I have worked out is that instead of grasping both sides with each hand, I work my right hand down below the camera, cupping it underneath, and then I use my right thumb to press the button. This provides more of a squeezing motion which seems to allow less camera movement. As a general technique, I also like to apply tension to the strap, pulling the camera downward as I release the shutter. This seems to make the whole camera feel more stable as well.

Anyway, have fun with your Duaflex!

You've got some inspiring work posted on Flickr from that Duaflex III. I had a III and a IV, but never shot enough with either to get anything of interest. I'm pleased to have another go at it with my Duaflex I.

I've turned up some intereting historical info on the Duaflex, so hope to get around to putting up a web page about the camera sometime soon.

This was the camera my parents had when I was a kid. We used it into the late 60's. I still have the camera and need to give it a spin.

My own family produced and saved a lot of snapshots, but the photographic skills and processes were never looked at very critically. I remember some of the family cameras, but none survived to come into my possession. Luckily, it is possible now to acquire those old cameras now for a song, and to revisit some of those experiences that I was only marginally aware of at the time.