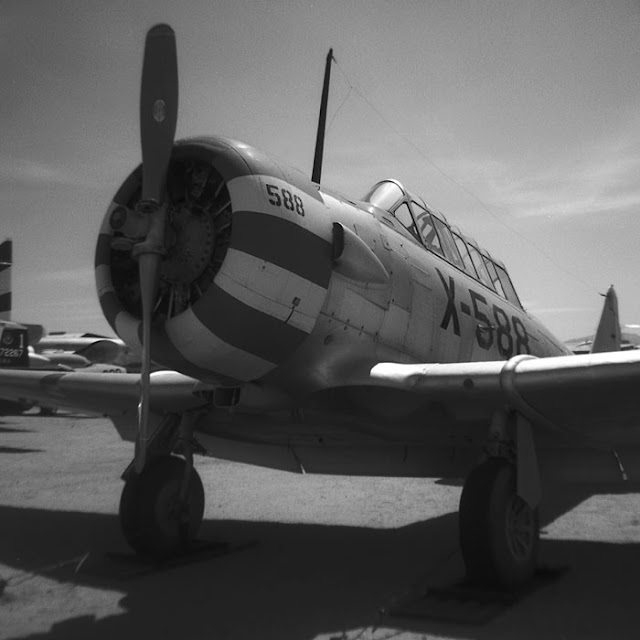 So knowing the characteristics of your Ansco Panda, how did you approach this shot?

Gary Winogrand said I photograph to find out what something will look like photographed. I subscribe to that approach, and I think box cameras are good tools partly because there are always elements of the unknown and of discovery in their use. I enjoy being surprised at what comes out of the simplest of cameras.

Of course, I have made a lot of photos with a lot of box cameras, so I'm not totally clueless about what to expect from them, and how the different models compare in their capabilities.

All the box cameras have limited or no adjustments available for exposure and focus control, so the emphasis in their use is on the decisions made by the photographer including subject, lighting, perspective, composition, timing and film choice. All the box camera formats offer significantly more area for capturing images than 35mm; for instance the little Panda provides about six times the surface for recording an image as does the 35mm frame. That bigger negative yields smoother and more nuanced tonal values than even the best 35mm camera and lens combinations.

The Panda, like most boxes, has a single meniscus lens; it has a very high level of sharpness in the center which softens gradually toward the edges without marked brightness vignetting. The focal length is about half that of a Hawkeye Flash, so it definitely falls in the wide-angle category, taking in a good swath of territory and producing a perspective in which background objects appear diminished in relation to the foreground. I think the sharpness of the images from the little Ansco box is also partly a result of the shutter being snappier than average, probably yielding a speed of 1/50 to 1/100 rather than the 1/25 to 1/50 more commonly encountered. The fixed aperture and shutter speed of the Panda make it ideal for bright sun shooting with fine grained 100-speed film.

Like a lot of the simple Kodak cameras of the post-war era, the Ansco Panda has a highly magnified brilliant finder which is a great aid in composition. For me this more than makes up for the lack of focus adjustment, and makes the camera a lot more enjoyable to shoot than any of the high-end twin-lens reflex cameras. The bright image that I get from the finder gives me a lot of confidence in the appearance of the image that will be recorded on the film.

The Panda with its wide lens and medium format is especially well-suited to situations like car shows and big aircraft exhibits which are often very cluttered and offer very limited points of view for the photographer. One wants to capture enough of the subject without also including too much of the surrounding clutter. The soft edge effect of the Panda's lens helps in that regard, and the size of the image and its tonal possibilities create a nice balance between shadows and highlights.

All of the above played into my thought process in making the photo of the AT-6, a plane I've photographed on many occasions. In this instance I was trying especially to take advantage of the lighting to capture the contrast between the powerful radial engine thrusting into the foreground, and the rather delicate looking green-house canopy.

The main limitation in regard to the Panda's use in photographing subjects like the old planes is in the positioning of the camera. You can't really get the Panda higher than the level of your shirt pockets. That is a sometimes serious limitation on one's ability to control perspective and background-foreground relationships. It is surprising what a foot of elevation can make sometimes in making photos in an environment like the air museum. Since the image size is generous in the Panda it is possible to compensate for the loss of perspective control somewhat by cropping the image, which I did in the case of this photo.

I appreciate the time you took to write this thoughtful comment on all that goes into shooting with a box camera, and with your Panda in front of this airplane. It has clarified and expanded my own thinking about shooting with box cameras.

The timing is especially interesting, as just last Wednesday I took the afternoon off, loaded some Neopan Acros 100 into an Ansco Shur-Shot I got not long ago, and went out shooting. Past experiences with simple cameras, such as my Duaflex II and an Ansco Cadet I used to have, told me that I needed lots of sunlight and that contrasty scenes would turn out best. So that's what I went looking for. The film's at the processor's now.

I like Gary Winogrand's line and will steal it.

I have a Shur-Shot Jr. which is pretty similar. Only ever shot one roll with it, but got a picture of some hills near my home that is one of my great favorites. I'll look forward to seeing what you do with yours.