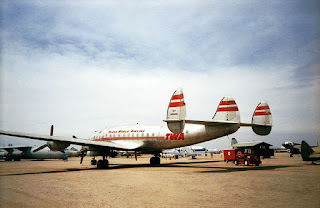 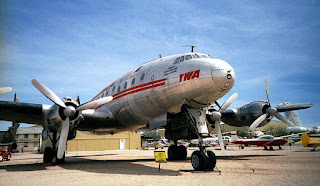 Howard Hughes was involved with the Constellation throughout its design and development process, which goes a long way toward explaining the unique style of this aircraft.  I wish I had a clearer memory of the one flight I made in a Connie toward the end of its career in the mid-'60s.  I recall that the jet liner I was traveling in from the East Coast to the West developed some mechanical problem, and all the passengers were loaded onto a Constellation in Chicago.  By then we were all spoiled by the speed and convenience of jet travel at a time when passengers could still expect something like a decent in-flight meal. The attendants did their best to make us comfortable, but I remember the rest of the cross-country flight as painfully slow.  Had I made the flight ten years earlier, I have no doubt I would have been impressed by the craft's speed and elegance.
Posted by Mike at 9:33 PM

Maybe it's a nostalgia thing - watched too many movies from the early 60's - or does this plane exude style and class?

It does seem like a lot of '60s films started out with a telephoto shot of an incoming airliner, though I don't specifically recall a Constellation being featured. One could also count on having the actors emerge into the terminal wearing electric blue suits in over-saturated Technicolor. All playing into the idea that how you got there mattered.

Must have been a popular plane, despite a too long name.

My first passenger flight in 1967 was in a Constellation. That tail is hard to miss.

I see from a brief web search that the Connie has many fans. There are apparently many in various stages of restoration, and a few in the air at any given time.