In post-war America there was a fierce competition among makers of inexpensive box cameras.  Profit margins were slim, but the market was huge.  The challenge was to produce a camera that could be sold for a few dollars, but which would make reasonably sharp photos and hold up to rather rough treatment.  In the 1940's one of the most successful products came from  the J. E. Mergott Company of Newark, New Jersey, using manufacturing  techniques that had been perfected in the second half of the 19th Century. 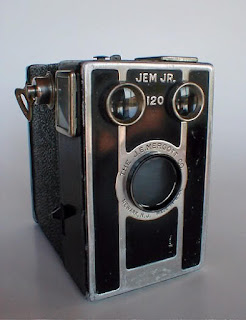 J. E. Mergott's Camera Division produced only one camera, the JEM JR. 120, and it was made almost entirely of stamped sheet metal. Most other manufacturers used a variety of materials for their low cost offerings including wooden cases and cardboard internal components, along with stamped metal shutter parts.  In the Jem Jr. 120 by contrast, even the large internal frame known as the "cone" was made of thinly rolled steel.  A careful look at the design shows a great deal of ingenuity in forming and bending the springy metal to yield the required rigidity while accommodating the essential photographic functions of a simple camera. The camera's single-element meniscus lens -- and possibly the other glass components -- were likely bought from an outside supplier.  There was only  a little over a square foot of sheet metal needed to make a camera, and that along with the few other components likely only cost a fraction of a dollar in the 1940's.

The Mergott Co. business model was basically to be a supplier of metal frames for ladies handbags.  While that seems not particularly close to the idea of a camera, it was a kind of useful preparation for camera making in that the frames had to be both light-weight and strong while allowing for the smooth operation of hinges and clasps. Perhaps even more important than the design and manufacturing skills built up over the previous fifty years was the nature of the times when the Jem Jr. made its appearance.

With the end of World War II, steel and other raw materials suddenly became available for the production of consumer products.  The J. E. Mergott Co. factory located in Newark was in the right place at the right time, and it was equipped with all the power and tools to get the job done.  Of course, Kodak and other manufacturers were developing new materials and technologies which would ultimately make the Mergott approach obsolete, but the company was able to keep a profit window open for about five years for its unique box camera.  The company sold wholesale to dealers who in turn retailed the Jem Jr. for five or six dollars.  Today, you can probably find one on ebay for $10 if you are patient.  One does see some with Girl Scout logos going for seventy-five or eighty dollars to collectors, and of course there is no shortage these days of unscrupulous thugs trying to get $150 to $200 for this simple little box camera.

It has been quite a few years since I put a roll of film through my JEM JR.  I've got an order of TMAX 100 on the way now, so I'm thinking it is time for another round of pictures from this interesting camera.

(BTW: that portrait in the right-hand column was made by Margaret using the JEM JR.)
Posted by Mike at 9:58 PM

Viewing the 3D graphic front on, reminds me of the Polaroid SX70 for some reason? Looking forward to see the photos you get with this gem ah I mean JEM.

And with that, this post became the Internet's #1 resource about the JEM JR!