What's in your pocket?

If the year is 1948 and you are a G.I. in occupied Germany you might have a nice little Zeiss Ikon Ikonta 35 in your pocket which could have been purchased at your Base PX. 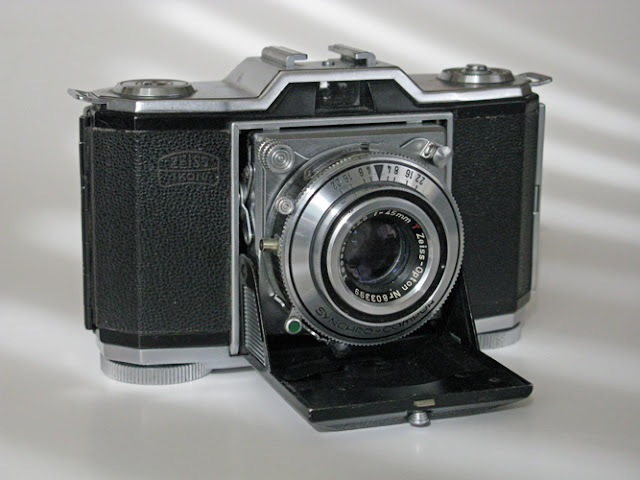 If that G.I. was a real photographer he might also have supplemented the camera purchase with some useful accessories such as a clip-on rangefinder and a light meter. 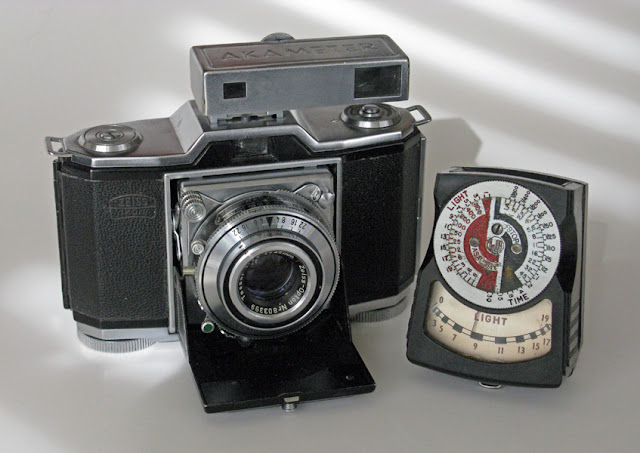 My own Ikonta 35 turned up in a Las Cruces pawn shop a half century after it was built.  It was one of the first cameras I acquired when I finally got back to film photography.  That was a particularly fortuitous find because of the Opton Tessar lens which showed me what that historic lens design could accomplish when attached to even a relatively simple camera.
I subsequently acquired a Zeiss Ikon Contaflex with exactly the same lens, and shortly thereafter a Kodak No.1 Autographic Special folder with a Bausch & Lomb Tessar dating back to 1917.  The early Tessar on the Kodak was uncoated, but still made great pictures as they all do.
The exposure meter and the rangefinder atop my Ikonta 35 turned up recently in a box of photo gear that was given to me by a friend.  It seemed a good excuse to get out with the camera and the accessories to test the kit. 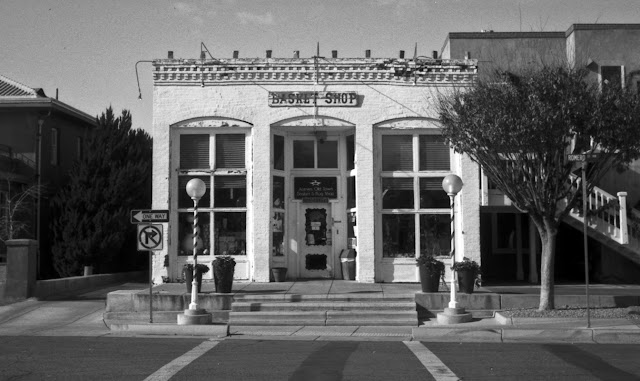 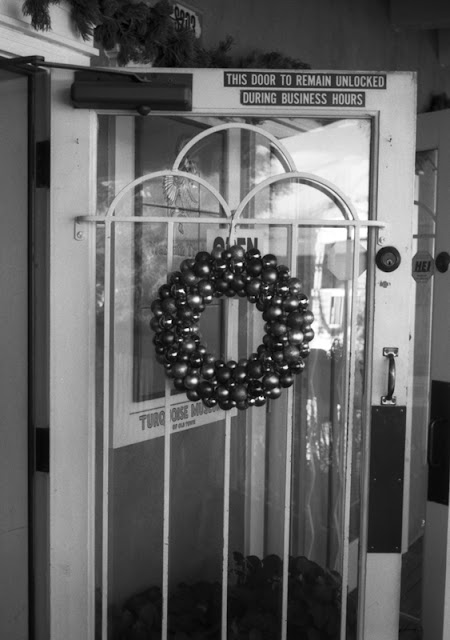 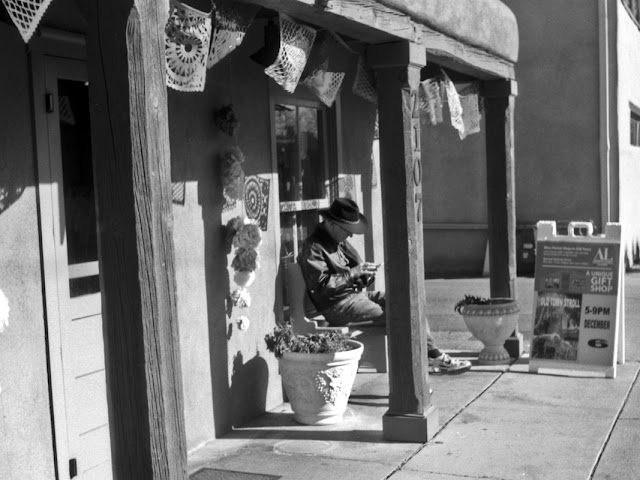 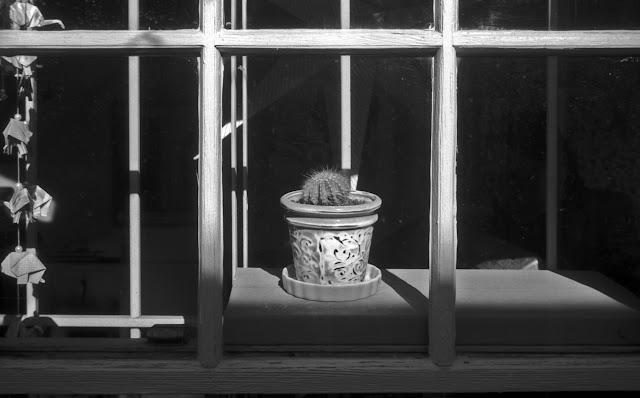 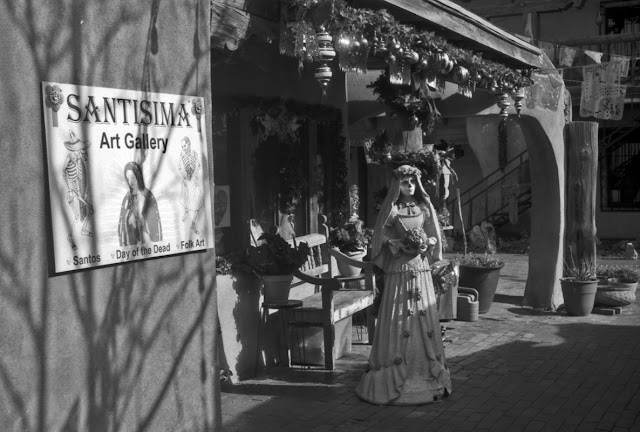 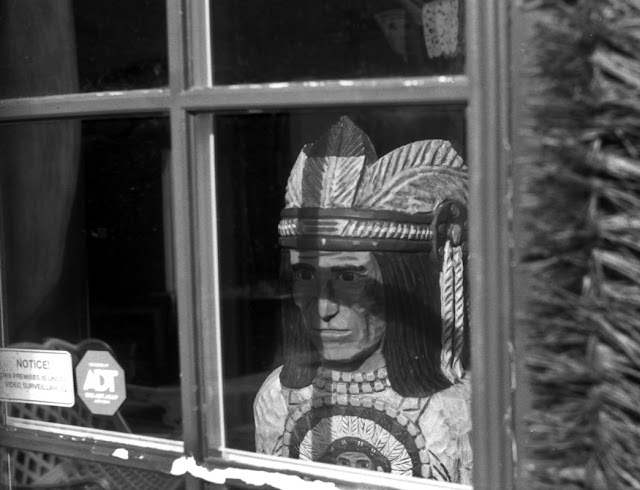 The fifty-year-old light meter worked perfectly.  Meter designers of that era still had not come up with the idea of match-needle readings, so the user had to turn the dial so that the ASA setting coincides with the displayed light value.  Then, an f-stop and shutter combination could be selected from the other side of the dial, and those settings would be transferred to the camera.
A label on the meter's back says "DeJur-Amsco Corporation, New York, NY, Made in U.S.A."  The meter design, except for the black bakelite case, is identical to an early Zeiss Ikophot. 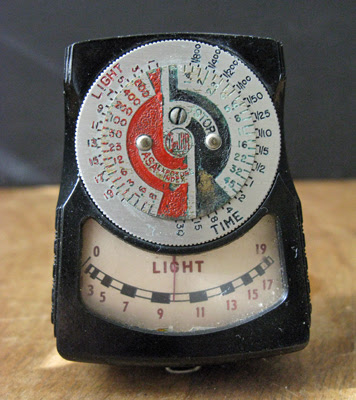 My usual routine with cameras like the Ikonta 35 or the Vito II is to set the focus to around ten feet and the aperture to f16 which gives me enough depth of focus in good light to yield a sharp picture at anywhere from six feet to infinity.  For a low light close-up you must fall back on your ability to accurately judge distances, and successes become a bit hit-or-miss.  So, for pictures like that low-light shot of the door with the holiday wreath, the little AKAMETER accessory rangefinder comes in very handy. 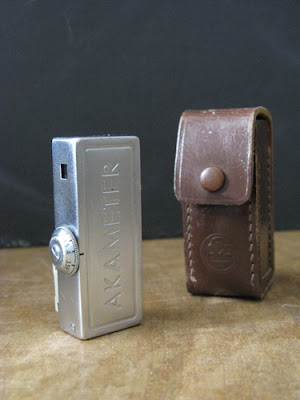 The view through the little eyeport of the AKAMETER is a bit dim after half a century, but the rangefinder is still highly accurate.  That said, there is still some judgment required to transfer the distance setting shown by the rangefinder dial to the camera as the numeric distance scales on both are not finely graduated.  So, the easiest way to get a good close-up is probably to just set the rangefinder and the camera focus to the same setting -- say 4 feet -- and to then move back and forth slightly to bring the split images into alignment as you might with a coupled rangefinder or even with an slr.
I'm thinking all of the above probably seems awkwardly archaic to anyone who has come of age in the digital era, but it really doesn't require much time to develop the necessary skills to bring the old cameras and their accessories back to a useful life.
Posted by Mike at 6:29 AM

Great post! There is much satisfaction to be found in the process of learning to use these old machines and the ultimate reward--a nicely exposed, well composed, sharp and pleasing image. I am always anxious to see what develops from each roll I shoot.

Indeed, excellent exposures and contrast! As for light meters, even the famous Gossen Luna Pro CDS (1960s design) was similar to and rather clumsy like your DeJur-Amsco meter. You read a number from a scale where the needle stopped, then transferred that number to a circular dial. The later Luna Pro SBC was much more convenient because you turned a dial until the meter was zeroed, and read the f-stop directly off the dial below. The 1990s Luna Pro Digital is even better: press a button and the LCD display shows you the f-stop and shutter speed.

That Luna Pro Digital seems like a really useful tool. I have quite a collection of exposure meters, but none are that precise and I tend to use them very intermittently on my photo excursions.