What are people looking for in photographic images?  What is it that people like about photos?  What are photographers trying to communicate with their images?  These questions seldom get asked explicitly, yet they lurk under every photographic presentation even though the answers are rarely articulated.  It seems that there is a disconnect between visual perception and verbalization.

A possible way to approach the appeal and expression of visual imagery through photography is to look at what came before the invention of photography.  Painting, drawing and sculpture are obvious precursors, but then one must ask the same question: what is the appeal in those art forms?  It seems to be a tautological trap that leads nowhere.  A better approach might be to look at some art forms that were in vogue immediately prior to the invention of photography which took place about 1839.

Pinhole images, camera obscura devices and cut paper shadowgraphs were available centuries before the invention of photography.  Those techiques produced realistic portrayals of people and scenes from nature.  What set photographic images apart from those primitive technical precursors was the persistence of a tonally complex image on a two-dimensional surface.  The first instance of such an accomplishment with commercial viability was Louis Daguerre's invention of the daguerreotype process in which a light-sensitive emulsion was coated on a polished black plate on which a lens-focused image could be recorded.

Daguerre's technical breakthrough was based on earlier work by Niépce, but of equal importance was Daguerre's personal history -- he was a painter, a theatrical set designer and the co-inventor in 1822 of a theatrical presentation known as the Diorama.  The Wikipedia page on the Diorama provides this description of the experience:

The Diorama was a popular entertainment that originated in Paris in 1822....the Diorama was a theatrical experience viewed by an audience in a highly specialized theatre. As many as 350 patrons would file in to view a landscape painting that would change its appearance both subtly and dramatically. Most would stand, though limited seating was provided. The show lasted 10 to 15 minutes, after which time the entire audience (on a massive turntable) would rotate to view a second painting.

The objective of the Diorama was to produce an awe-inspiring illusion of reality through the use of expertly crafted paintings selectively illuminated to create a sense of movement and the passage of time.  It was really more of a precursor to motion pictures than to still photography, but the technolgy to achieve that kind of fluid narrative would not be available for more than half a century.  So, Daguerre's invention -extraordinary as it was - perhaps did not live up to his ambitions. But, it was a crucial step in the proliferation of both still and moving images anchored in reality.

Talbot's invention of the reproducible negative image, and then Eastman's innovations in flexible roll film and simple cameras stimlated the explosive growth of photographic imagery, which became the dominant visual experience at the beginning of the Twentieth Century.  However, while the volume of photographic images hugely outpaced other visual representations, the older forms persisted and developed on their own course.  Painters continued to paint, sculptors sculpted, and Dioramas were adapted to showing scenes which might otherwise be inaccessible because of time and distance constraints.  Natural history museums became particularly adept at constructing Dioramas featuring animal life in natural appearing settings, including extinct species in conjectured landscapes.

People at all levels of society in the western world embraced photography as both consumers and producers of images.  However, there was also a concurrent wide-spread development of Diorama forms at a popular level, often promoted by hobbyist groups such as modelers of aircraft and operators of scale model railways. In fact, today there are likely very few family homes that do not contain numerous miniature Diorama-type displays.  Such displays are often rudimentary and the fabricators likely have never heard the term, "Diorama", but they clearly are related to the intent of the original Dioramas to offer a representation of reality,  perhaps centered more on intensely personal experience.  Glass front cabinets and tabletops contain all manner of small displays of treasured objects arranged to suggest some counterpart in real life.  Doll collections, tea sets, gun collections, hunting trophies; the list is as long and wide as human experience.  The intent of such displays is often to represent relationships and life experiences which are no longer directly accessible.  They may also represent an effort at self definition and the construction of identity.  Vernacular photography often serves those same ends.

Having practiced photography for a large part of a long life I have some favorite photographic images hanging on my walls.  I also have several Diorama-type displays in cabinets and there are a couple which share space with my computers on my desk.  I would say that both types of imagery serve the same purposes for me, that of representation of some percieved reality and that of construction and reinforcement of identity.  The photographs are mostly depictions of family members and scenes of treasured landscapes and travel records.  The Diorama-type displays are miniature, mostly symbolic, representations of identity often connected to an early and long interest in flight. 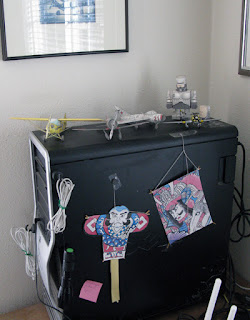 The miniature Japanese kites taped to the side of my computer remind me of building and flying kites from a hill in San Francisco.  On top ot the computer is a collection of small aircraft models.  My first flight experience was in the Piper Cub.  Hanging on the wall above the models is a cyanotype print of a Russian reconnaissance plane from WWII housed at a museum near El Paso.  To the right of my computer monitor is a fishbowl terrarium; on the top cover rests a paper model of a bi-wing amphibious aircraft, a Grumman Duck.  To the casual observer that model and its placement is a quaint decoration.  To me, however, the assemblage suggests a real life adventure from my youth of flying over the jungles of the northwest Amazon in just such a craft. 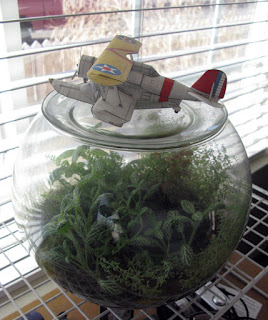 The whole flight obsession is related to the family hero, my uncle, who took to the skies at the age of eighteen during WWII.  He flew in two more wars after that.  His example, while kindling enthusiasm for the idea of the freedom of flight, proved unattainable for me in any direct way as I felt I lacked the athleticism needed for actually piloting an aircraft.  However, I did find other ways to express my interest in hobbies that ultimately included photography.

The little terrarium Diorama was partly related to my uncle's example, but it was also an expression of a sought after identity as an explorer nurtured by reading many books in my childhood about Nineteenth and early Twentieth Century explorers.  I did not have any real aptitude for meaningful exploration either, but I was lucky enough to survive my limited experiences in that realm and to ultimately go on to developing a more mature outlook on life's challenges and opportunities.  My heroes these days tend to be artists who have helped me to see the world in new ways, and the self-description and identity I am focused on now is that of photographer.

(Watching myself go by.)
----------
Update:
I came across a post at Lenscratch featuring the work of Lori Kella who constructs elaborate paper dioramas which she then photographs.  The results are unique and related to several other post-modern trends in photographic styles.
Posted by Mike at 9:39 AM