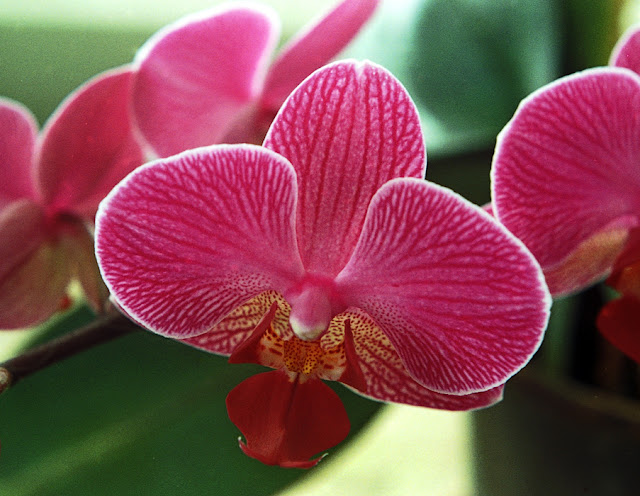 Margaret has a small collection of orchids on a table in the southeast corner of our living room.  I think all have been given to her by friends who have given up on the plants after their initial blooming.  Margaret's success in reviving the plants seems to be based mostly on providing a brightly lit location, once-weekly watering and a large dose of patience. 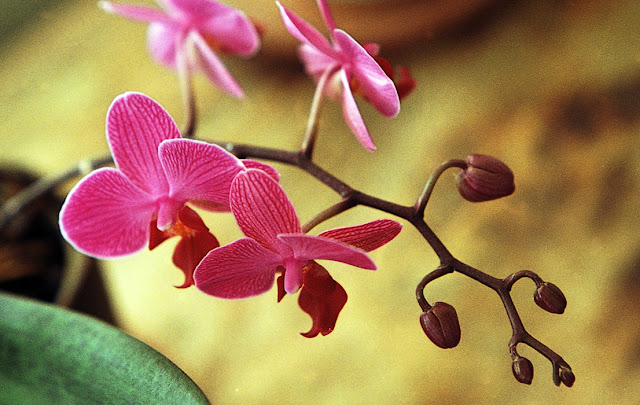 When I was a kid in the 1950s orchids were rare and expensive.  Hobbyists grew orchids in elaborate temperature and humidity-controlled hot houses.  The main commercial outlets were florists which made the cut flowers available mostly in the form of corsages for teenage mating rituals.

Today, an astounding variety of blooming orchids can be found in about any supermarket, priced low enough to encourage impulse purchases.  The horticultural innovations along with production and marketing techniques rival those of the computer industry in their complexity.  The best description I found of the current state of the industry through a quick Google search was an article hosted at Perdue, Development of Phalaenopsis Orchids for the Mass-Market by R.J. Griesbach.  The final two paragraphs nicely sum up the amazing industrialization of orchid production and where it is headed:

Phalaenopsis production is now international in scope. For example, in one operation breeding occurs in the United States. Selected clones are sent to Japan where tissue culture progation is initiated. Successful cultures are then sent to China for mass proliferation. In vitro grown plantlets are next sent to the Netherlands for greenhouse production. Finally, flowering plants are returned to the United States for sales. Very few Phalaenopsis are bred, propagated, flowered, and sold in the same country.

At this time, production does not meet the demand. It is widely expected that sales will increase as production increases. Demand for Phalaenopsis should continue well into the future as new types are developed. Based upon today’s breeding efforts, the cultivars of the future will have a compact growth habit, variegated foliage, fragrance, and be ever flowering.

When anyone buys me an orchid they are sentencing it to die. I don't have the touch.

If it were not for Margaret we would likely not have much live vegetation in the vicinity. My impression is that orchids are often drowned by over watering. They are adapted to living out their lives clinging to trees and get much of what they need from the air.