I found this interesting Kodak folder recently on ebay. The No.1 Series III was produced by Kodak from 1926 to 1932. Conveniently, it uses still-available 120 roll film. 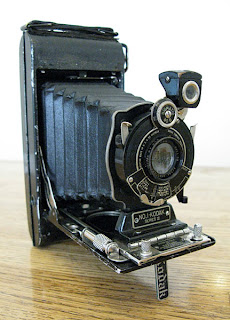 The camera is very well built and has several unique features. The majority of Kodak folders had simple self-cocking shutters, but this one sports the No.0 Diomatic with a cocking lever opposite the shutter release, and speeds from 1/10 to 1/100 as well as B and T. The Autotime face plate under the Anastigmat lens has a windowed swinging dial that really helps to determine exposure, unlike the cryptic version on my No.2 Brownie. With a minimum aperture of f32 the camera easily handles 400-speed film. 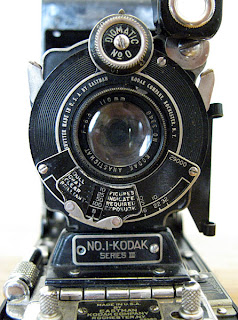 When I took the camera out of the box, I was glad I hadn't paid much for it as it was in truly horrible condition. The leather covering had been stripped off and the body of the camera had been sprayed with black paint, even covering over the ruby window. Worse, a light bulb held inside the bellows revealed it to be deteriorated beyond repair. 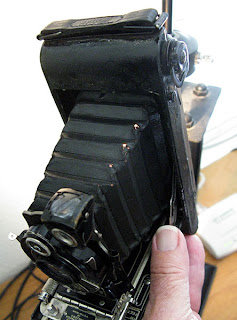 Since the lens, shutter and viewfinder all looked fine, I decided to replace the bellows. The Kodak bellows are held in place by ten or twelve metal tabs at the rear, and the front is secured behind the shutter with two or four rivets and glue. The old bellows is first cut out to give access to the fasteners. The tabs are then lifted with a hooked tool such as those in a Kobalt kit that I found at Lowe's for five bucks. The rivets can be ground down slightly with and electric drill from the inside to allow separation at the front end. After attaching the new bellows, I found it necessary to seal the rivet holes with some black silicone. 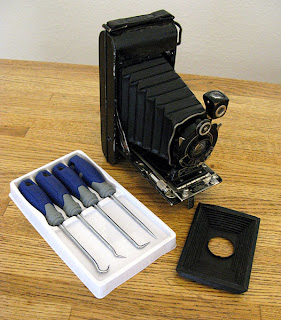 The new bellows proved light-tight, but there are still a few things to be done to the camera. The viewfinder is not quite centered in landscape mode, and that results in misframing. I also roughed up the frame mask while bending back one of the bellows tabs, which produces a band of scratches across my negatives. Still, the results from the first roll were excellent in most respects, and I'm looking forward to working more with the camera. 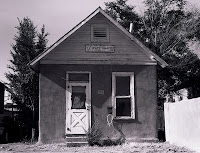 Too bad about the leather having been stripped off. It's nice when an old camera is nice-looking enough to display!

I got the camera from an ebay "Top Rated Seller", which certainly says something about the state of the world. The missing covering was not obvious from the pictures, nor was there any mention of the state of the bellows. That said, cosmetic issues are fairly low on my list of priorities. I may get around to recovering the thing if I use it enough.

I like that "Door to Heaven" cabin. The lens is definitely working well. Replacing those bellows was quite a job!

I might not have undertaken the bellows replacement if I had not had the opportunity to see it done first. Don Day put a new bellows on my Hawkeye Special while I watched some years ago.

In the case of the No.1 Series III, I had the good luck to find a bellows on ebay that had the right size for the camera. It was identified as Kodak part #34656. Since the bellows came as a set of two for $15 I tried the same one on my Vigilant, but the front opening was too small for the larger 4.5 lens on that camera.

I have one of these in almost mint condition...where can I get film for it?

You'll need to go to an actual camera store to get 120 roll film. Lacking that, there are quite a few on line sources for film, and the prices are as good or better as local retailers. I buy most of my film from B and H Photovideo. If you google "purchase film", you will turn up a good list.

Looks like you've done some interesting things according to your bio note. I'd be interested in seeing some of your work if you post it on line somewhere.

About 15 years ago I was lucky enough to find the same camera from the daughter of the original owner who sold me the camera for my collection. Get this, it came with the original box for the camera (a two piece sliding together type) with the price marked on it and a photograph taken back in the 1930's which was used as a contact print used for the distribution and sale of local postcards ( with the typical white marking of the location of were the photo was taken. Makes for a nice complete story of this vintage camera. The location where this camera was used was Delavan Wisconsin. Don Wehrenberg Wheaton Illinois
PS the original owner also signed the camera.