Contessa Nettel was a camera company in Stuttgart under the direction of Dr. August Nagel that offered buyers about forty different models including many variations of the Cocarette in the 1920s.  The company merged with the group that formed Zeiss Ikon in 1926, but Nagel was out of his comfort zone there, and he left to start up the Dr. Nagel-Werke factory that was ultimately acquired by Kodak in 1932.  Around that time, Nagel developed the first pre-loaded 35mm cassette for the Retina. 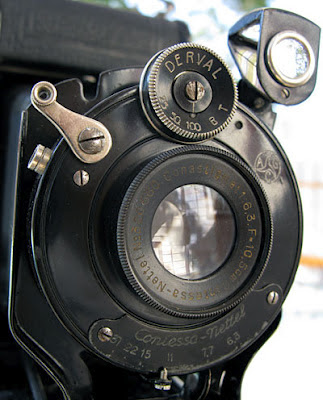 Nagel probably was personally responsible for the design of the Cocarette, but it is hard to know at this remove how much of a hand he took in the design of later models.  However, all the cameras that came from his factory clearly met his exacting requirements for design excellence.  Shortly before August Nagel died in 1943 his son, Helmut Nagel, took over the direction of the company, managing it though the war and for many years afterward. A large number of lenses, camera components and newly developed prototypes had been hidden in a secret bunker before the war's end; with the help of U.S. overseers, the company managed to get its cameras back into production within months of the surrender. 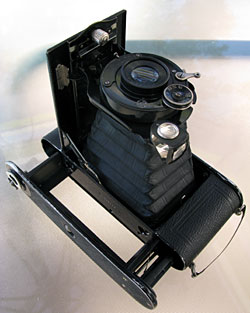 The Cocarette line of cameras from Contessa-Nettel were produced with a variety of shutter and lens combinations. What they all had in common was a high level of quality in their materials and construction, along with some unique features which set them apart from the crowd. The shell of the camera was all metal with finely patterned side panels and high quality leather covering. The internal film-carrying frame was attached to one of the side panels and slid out of the camera like a drawer for film loading. Film flatness was assured in the Cocarette by threading the roll film through slotted rails rather than the more common pressure plate found in most other folding cameras of the time. A round port in the camera's back with a removable disk cover gave acces to the rear lens element for cleaning. 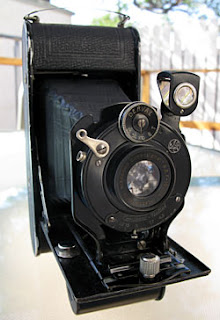 My camera, made before the 1926 merger with Zeiss Ikon, has the simplest lens and shutter combination offered, a three-element f6.3 anastimat topped by a dial-set Derval with speeds from 1/25 to 1/100 plus B and T. Focusing from 6 feet to infinity was achieved by pulling out the lens standard until a focusing tab dropped into the desired focal setting notch on the left side of the bed. Like nearly all the surviving Cocarettes, mine is missing the foot on the front cover, and the end handle is also missing its leather covering.

The camera was otherwise in nice condition for its age, requiring only a cleaning of the three lens elements to get it usable. By attaching a transparent target to the rails at the film plane I was able to verify proper lens collimation, and also discovered the process that the front lens needed to be flipped so the convex side faced outward. The lens proved nicely sharp in use, and the available 1/100 shutter speed made hand held shots feasible. To reduce the liklihood of camera shake I used a cable release, and also taped a simple frame-type finder to the side which gave me a much better view of my subjects than the bright, but too small reflex finder.

These pictures of the fountain and the enlarged central section demonstrate the good resolution of the lens at f31. 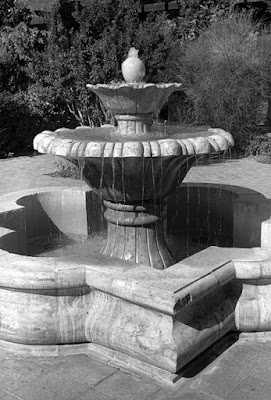 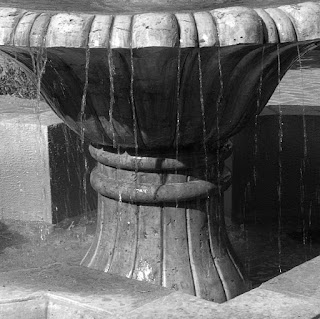 Two more shots from my first roll through the camera: 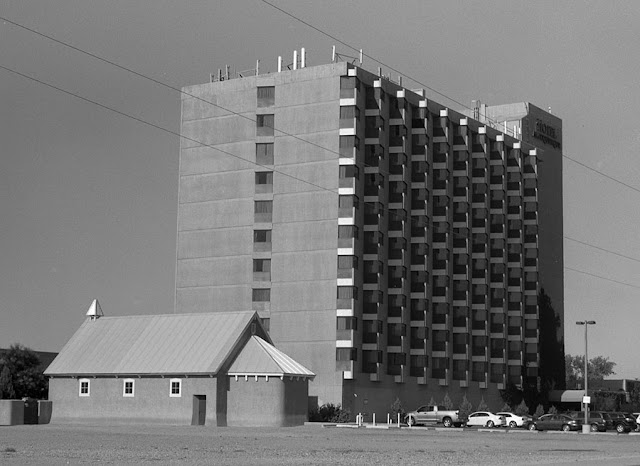 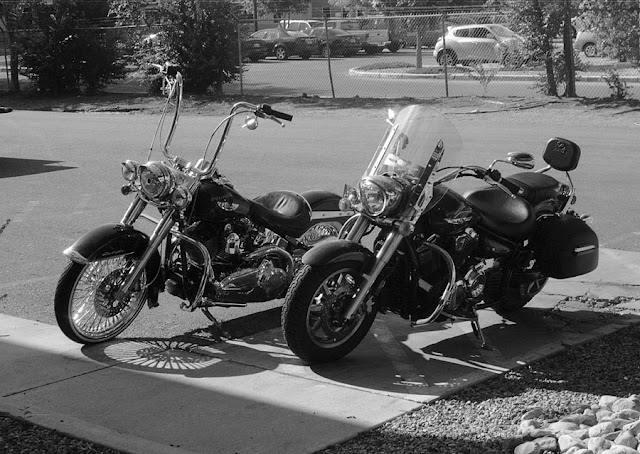 f/6.3 with 1/100 sec is about the bare minimum for usefulness! But you got crisp results from it.

It's actually a lot easier to shoot these cameras in the present day given the range of film speeds that are now available. I generally like to shoot ASA 400 film in my mf cameras. Using the Sunny 16 rule, that means a bright sun exposure works out to be f32 at 1/100, which is quite manageable even hand held. I would guess that in the 1920s photographers were shooting at ASA 25.