Thanks to some generous loans and donations of equipment I have recently been able to get acquainted with some film cameras that I likely would not have gotten to otherwise.  First up is the Minolta SRT 202 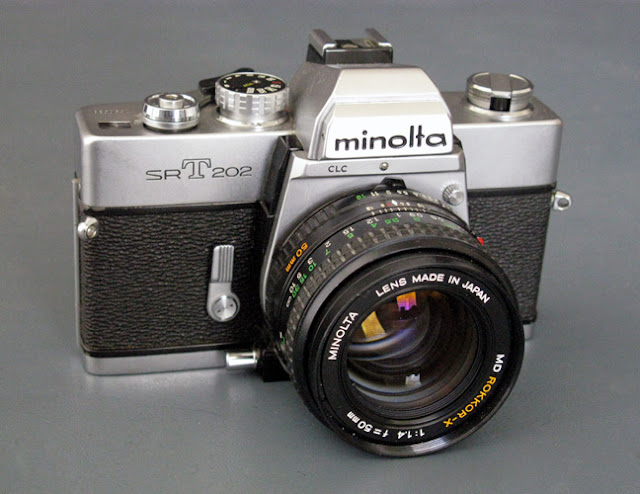 The SRT 202 is big and heavy for a 35mm camera, but it is also very well built.  This one shows few signs of use, works perfectly, and it seems likely it could go on serving the needs of film photographers for a couple more generations. 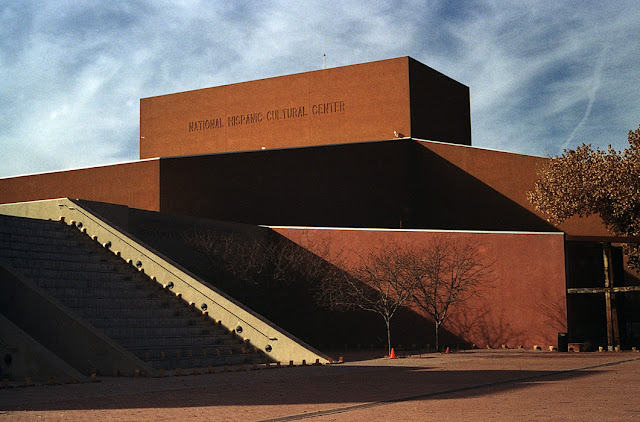 The camera offers full manual control along with through-the-lens metering at full aperture.  The shutter has a 1/1000 top speed with an ASA range going up to 6400.  A depth of focus preview button is perfectly positioned for quick access.  The bayonet-style lens mount allows quick lens changes. 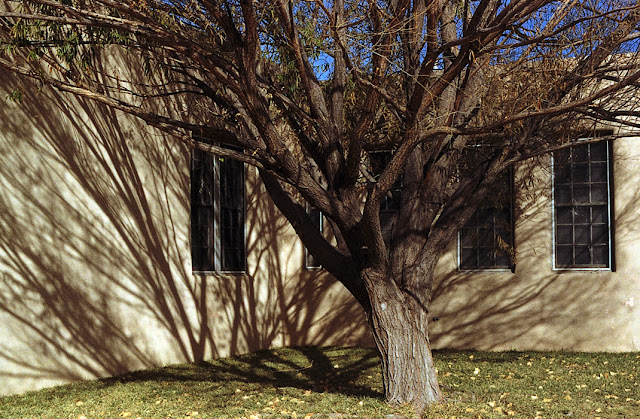 The standard lens for the SRT 102 was the MD Rokkor-X  1:1.4 f=50mm.  This fine six-element design is beautifully coated and very sharp at full aperture.  Minolta made all their own lenses in a wide variety of focal lengths and they are generally available at reasonable prices today. 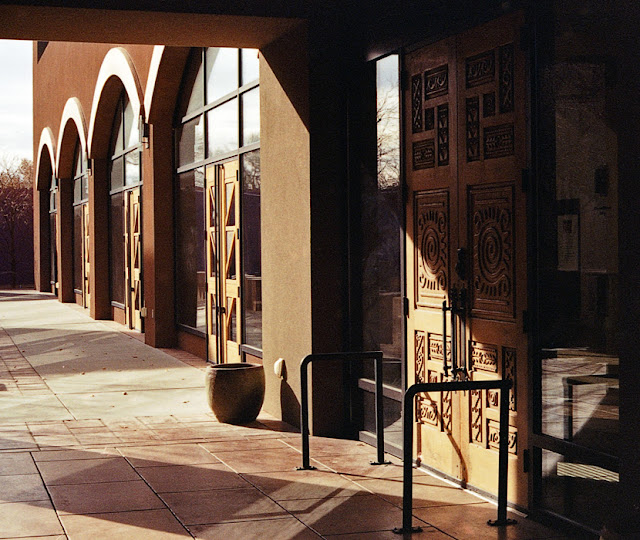 My only experiences with Minolta cameras before was with earlier models.  I picked up a Minoltina AL-s rangefinder at an El Paso junk store for ten bucks many years ago.  I unstuck the shutter and adjusted the infinity focus and found that the Rokkor 40mm f1.8 lens was really excellent.  I was less impressed with an even-earlier Autocord tlr which I only kept for a short time. 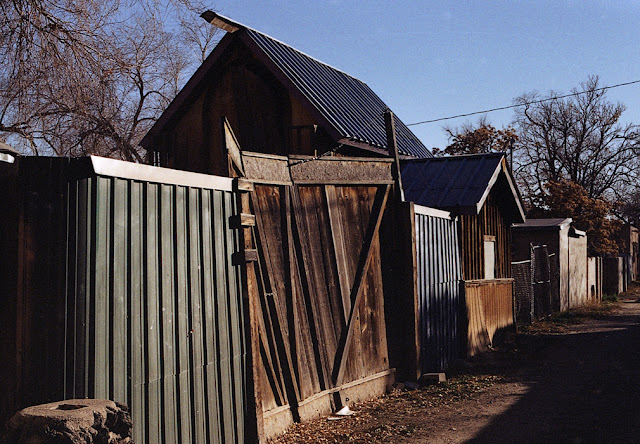 There is quite a lot of good information about Minolta cameras available on line.  The Rokkor Files site has an excellent history of the whole SRT series which stretched form 1966 to 1981. 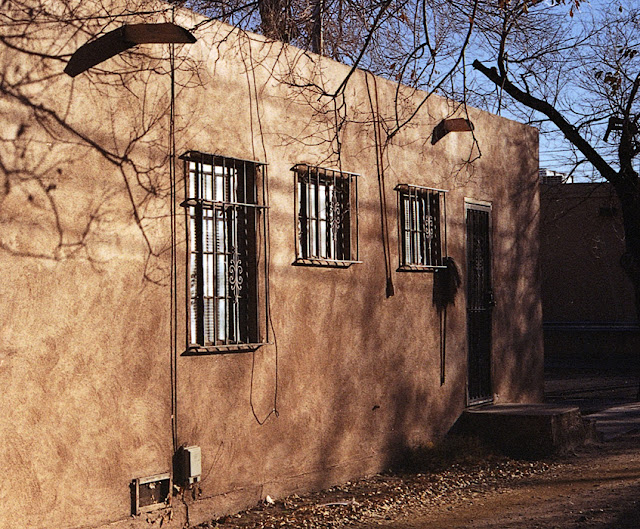 While browsing the Minolta SR Series group at Flickr I came across a reference to the use of the Minolta SRT 101 by W. Eugene Smith.  It turns out that Smith's Minamata photo essay was done with the Minolta.  Smith's assistant, Takeshi Ishikawa, wrote a book many years later about Smith's making of the great story and the Minamata survivors which was reviewed in the New York Times Lens feature.  The slide show includes a couple shots made by Ishikawa of Smith using the SRT 101; in one he has two of the big cameras on straps around his neck. 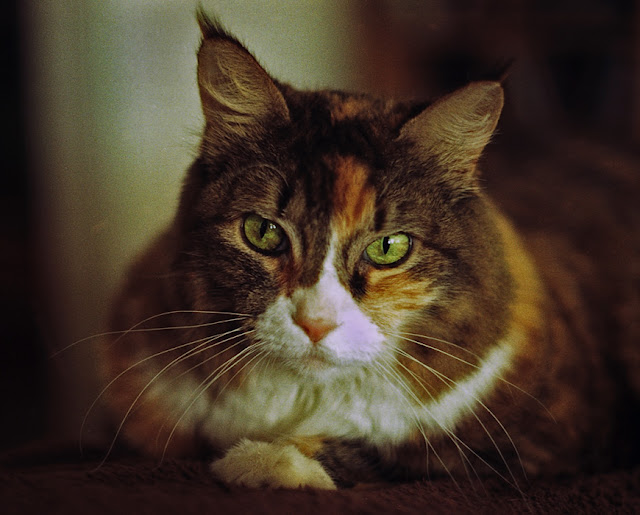 The slightly expired Kodak Color Plus 200 used here was also a generous gift. Judging by the multi-lingual labeling the film is likely intended primarily for overseas distribution, though it can be had in the U.S. through several on line sources including Walmart which sells it for less than $3 per roll. The film works particularly well with the Unicolor C-41 developing kit, yielding nice color and showing no spots or blotches which sometimes plague other films.
Posted by Mike at 6:01 AM

I didn't expect to like Minolta cameras, but the ones I have tried have been very capable cameras and pleasant to use. It's a shame that the company did not last as they were always way ahead of their time.

Your exposures are perfect. Your shot of the Hispanic Cultural Center is the most interesting to me because of the shadows and the shade of brown that lens and the Color Plus captured on the building. I've not shot any Color Plus and now I'm interested. Too bad I have probably 25 rolls of Agfa Vista 200 in the fridge -- really don't need to buy more film.

Lots of interesting Minolta history out there. As I was browsing links to Minolta I was reminded that I did have one more Minolta briefly, the Minolta 110 Zoom SLR. It was super innovative and good quality, but I just didn't have the patience to deal with those film cartridges and the tiny negatives. I would like to try a Minolta 35 some time, but I rarely see them in good shape and with the original Rokkor lens.

Wait, there's more. I see in my defunct web site that I also had a Minolta Auto Wide. The Rokkor lens was terrific, but the camera was ridiculously over-engineered. I may have shot one roll of film in the camera before selling it.

I see there is a good long thread about the SRT line at Rangefinderforum.com. A lot of people report learning photography on these cameras and then getting back to them in later life. A lot of the cameras are still getting good use.
https://www.rangefinderforum.com/forums/showthread.php?t=110411

The SR-Ts appear to be very hardy. Which contrasts my experience with many other Minolta SLRs, the X-700 and Maxxum 7000 chief among them. I've owned two of each of those and all of them had fatal faults related to delicate electronics. My SR-T 202 did have a dead meter and a pinhole in the shutter curtain, but I attribute those to heavy use and possibly abuse rather than to fragility. Mechanically, that 202 was rock solid. My 101 was, too, last time I used it. It's been several years now, however. Man, this makes me want to shoot it again.

The length of the list of lenses and accessories for the SRT line rivals that of Leica and Nikon of the same era. It is not hard to understand how people with a collector's urge get hooked on building complete systems.