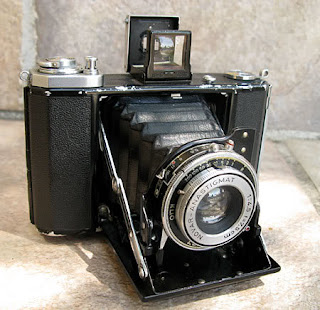 The post-War medium-format Ikontas retained most of the fundamental design characteristics of previous decades, but new materials and design ideas did take hold as the German camera industry struggled to reassert its place in the market. The 521/16 model, produced from 1948 to 1953, is notable for its compactness and light weight. The imitation leather covering no longer induces "Zeiss bumps" over rivet heads. A simple module under the winding key provides double-exposure prevention, and the plate at the front of the bellows to which the shutter attaches now has a charteristic folded tab with two rivets.

Some of the 521/16 models came with the high-end Tessar lens, but mine is an economy model with a 3-element 4.5/7.5cm Novar Anastigmat, and a Klio shutter with speeds from 1 second to 1/200th. Fortunately, a minimum aperture of f22 allows easy use of modern 400-speed film. The shutter and lens required only routine cleaning. The double-exposure module wasn't working properly, but it was easily disassembled, and bending up a leaf spring restored the proper functioning. Combined with the big 6x6cm format, the Novar lens cedes no ground in image quality. 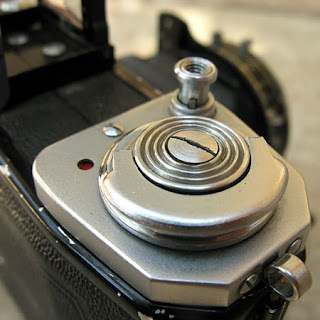 The Ikonta B is a nice option for anyone who might just be starting with film cameras, or perhaps someone who would like to graduate from using the more simple box cameras from those times which lacked full control of focusing and exposure.  Unlike the Kodak-made cameras of the period, Zeiss Ikon did not choose the doomed path of the 620 format, and instead went right on making their cameras suitable for use with standard 120 roll film.  So, with the Ikonta B there is no need to worry about the inconvenience of re-rolling 120 film onto 620 reels.  The Ikonta's strap lugs, light weight and good ergonomics also encourage a readiness to confront any photographic opportunity.  I think I paid about $25 for my camera; that was some years ago, but I still see them offered occasionally on ebay at that same price.

I never put many rolls of film through my Ikonta B, mostly because I had too many other great old cameras distracting my attention.  The results I got from the camera certainly showed that I should have given it more opportunities to show its stuff.

* * *
Wild Bill arrived in our southern New Mexico rural neighborhood driving a team of donkeys hitched to a little trailer similar to that used by Basque sheepherders.  He squatted on some land beside the old highway by the Rio Grande.  He bought an old pickup and used it daily to visit a cousin a mile down the road.  Bill had served quite a time in the Marines running a motor pool; I think he had some retirement income from that and maybe some Social Security as well.  He was kind to his animals and a good neighbor. 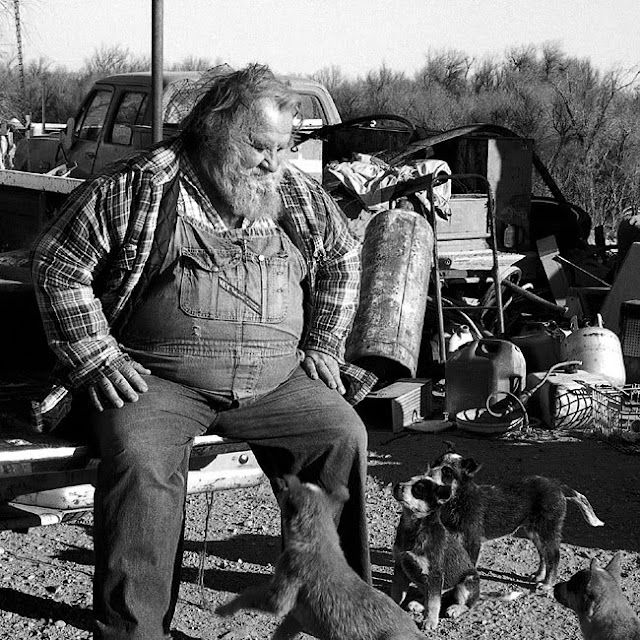 The largest and most impressive of the thousands of petroglyphs at Tres Rios is located at the top of the long ridge at the site.  It is usually alleged to depict a cougar, but I'm calling it as a jaguar because of the cross-hatching that fills in the figure. 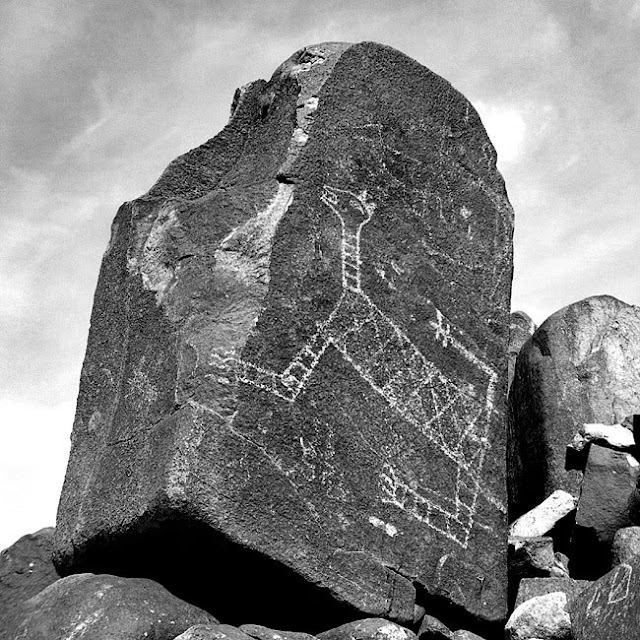 The stairway leads down into the sunken courtyard of George Pearl Hall which houses the UNM School of Architecture.  It was designed by Albuquerque architect, Antoine Predock. 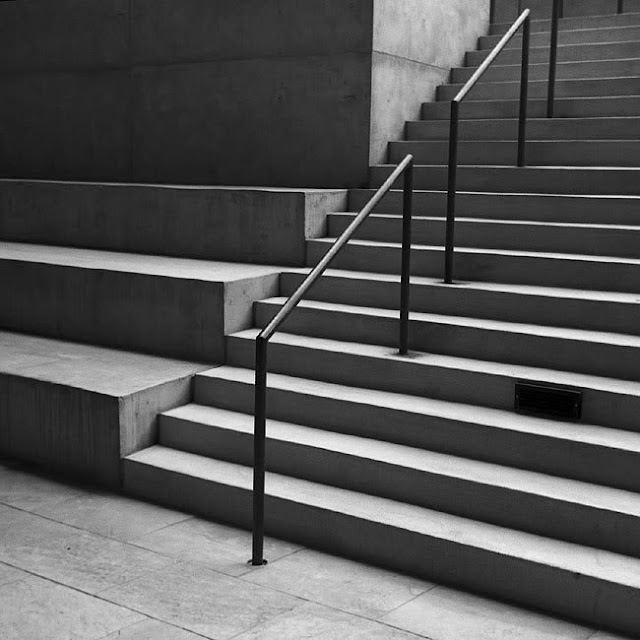 The Lobo is the UNM mascot, chosen originally no doubt because of its fierceness.  A more current association should probably take into account the Mexican Wolf's endangered status along with a similar situation among UNM faculty which has experienced many recent layoffs due to budget cuts. 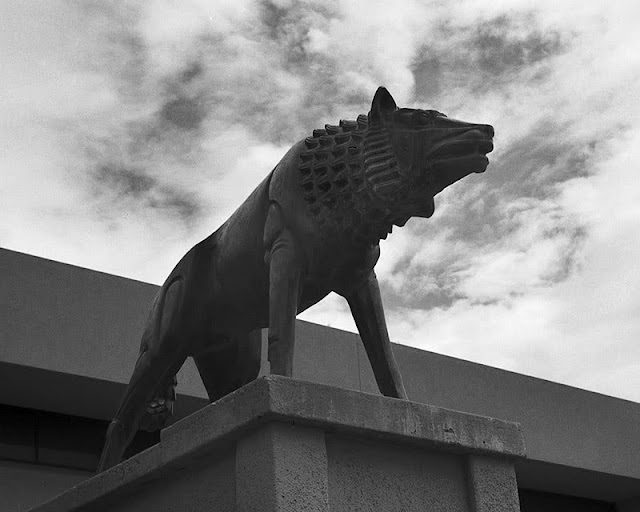 If you come across a fire engine on the street and you have an old camera with film in it, you have to take a picture.  That's the law. 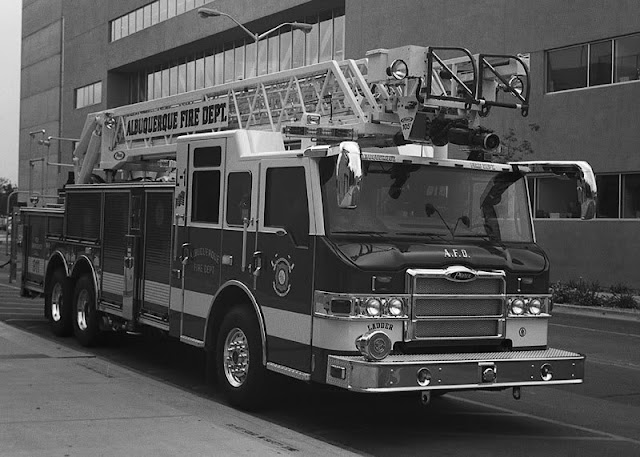 I too have a 521/16 and make 6 X 6 slides with it. It has taken the place of a 1933 Rolleiflex I've had since 1984. Shutter packed up on that one.
It's more compact than the Rollei, even in the fine leather case. People ask me if it's a Box Brownie? The device to prevent double exposure is a very useful idea. I really like my 521/16 as its in superb condition, as is the case.
Mine is a pre-war camera as it does not have the flash socket. My research using body and lens serials indicates 1938.

It is a very capable camera. One sees few pictures made with it these days, but I'd guess it was very popular in its day because of its compactness and light weight along with the Zeiss quality.