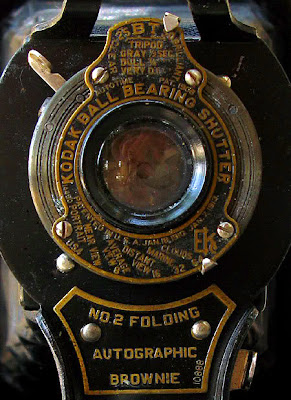 One of my favorite Kodak cameras is the little No.2 Folding Autographic Brownie. It makes very fine images thanks to the excellent two-element Rapid Rectilinear lens. It also sports a curiously complicated dial on the shutter front in which the numeric speed and shutter settings are supplemented by words describing light conditions and subject choices. The key to this wordy mosaic is to be found just above the words, "BALL BEARING". There will be found the name Kodak gave to the exposure system incorporated in the shutter face, "Autotime", and the Patent date of 1908. Using the "Autotime" name in a web search turns up quite a few early Twentieth Century ads from photography magazines along with historical notes on the details of the Autotime exposure system.

Kodak's directions for obtaining correct exposures using the Autotime dial was to use the speed settings at the top of the shutter to select the prevailing lighting conditions, the possibilities being "Brilliant", "Clear", "Gray", "Dull" and "Very Dull". Once a selection was made from those choices, the photographer was then instructed to move on to selecting the aperture designated as subject choices at the bottom of the shutter dial, with the possibilities being "Portrait", "Near View", "Average View", "Distant View", "Marine", and "Clouds". It was also explained that subject movement and depth of field considerations would also require additional adjustments. All of this, according to the Kodak ads and instructions, would result in an "automatic" indication of the proper exposure settings. That seems now like comical advertising hype, though perhaps a little less so at the time when popular photo magazines were providing exposure determination explanations which included the calculation of logarithmic exposure scales.

The original 1908 patent application (883607) for the Autotime Scale shows that it was not a Kodak invention. An American living in London, Frank S. Andrews, actually thought up the system, and his concept included some real automation which was not carried over to the Kodak product which first appeared on its cameras in 1909. Andrews did lay out the design to include the terms for light conditions and subject choices, but he also described a mechanical geared linkage between the aperture and speed settings for automatically maintaining the proper exposure when the speed was changed to adjust for subject movement, or when the aperture was altered to change the depth of focus.

Kodak's implementation of the Andrews design did not include any mechanical alterations of the shutter or aperture mechanisms. It was up to the user to make a determination of the lighting conditions and to apply that observation to the shutter and aperture manually. The Autotime Scale came installed on a number of Kodak models including the very popular Vest Pocket series which used 127-format film. The Scale could also be installed as an after-market accessory at a cost of $1 to $1.50, depending on the type of shutter. It is hard to tell at this remove how many users actually made practical use of this feature, as was also true of the Autographic feature which was offered on many of the same cameras. The company's stated aim was always to make photography more accessible to the common man, but there were also sub-texts about differentiating products from the competition and selling more cameras.

The novelty of the Autotime Scale did not pass the test of time in a very competitive market and was eventually abandoned along with the Autographic feature. Playing a role in in the demise were the establishment of the modern f-stop system of aperture designation, the availability of a wider range of film speeds, and a generally higher level of sophistication in camera design and construction. However, that was not completly the end of the Autotime idea.

In the 1950's the coupling of aperture and speed settings was resurrected by Kodak in its Retina line of compact 35mm cameras. In my Retina IIc, the shutter and aperture rings around the lens mount are latched together in such a way that incrementing the speed setting by one stop will automatically increase the aperture to maintain an equivalent exposure. This was part of an industry-wide introduction of the Exposure Value (EV) system which assigned a single value to designate a setting of aperture and shutter speed to produce an exposure of film appropriate to lighting conditions and film speed. This was made possible in part to the wide-spread use of exposure meters calibrated to the EV system and often connected directly and automatically to the cameras' shutter and aperture adjustments.
Posted by Mike at 3:44 PM

It's amazing to see the incremental advances over the last 100 years and how they affected the look of cameras. Today the advances are wrapped in the same package so you do not see the improvements by the appearance of the camera, they're buried in menus.

That accounts for a lot of the appeal of the old cameras for me. The cameras built after about 1970 have good capabilities, but when you get a group of them together it is hard to tell one from another. The same can be said of cars, and a lot of other stuff as well.

Beautiful post. Kodak striving at easy photography for the masses while technology evolves. You have always gotten good results from the No. 2.

Very interesting. You really have to concentrate to use these cameras. 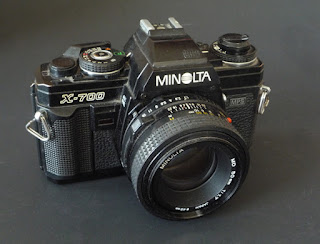